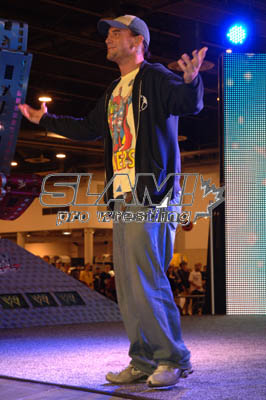 HOUSTON – Fathers and sons both real and scripted were the centerpiece of the revamped THQ Superstar Challenge Friday night. In the end, though, it was a fan favorite with no family ties who proved to be the best at the controls.

Formerly a standalone event to promote the latest edition of THQ’s popular SmackDown vs. Raw video game series, the seventh annual Challenge saw a number of changes for 2009. The biggest was a change of venue, incorporating the event into the main ring of the Friday night session of WWE Axxess.

That meant a much larger audience but a less intimate experience than last year’s contest, which was held in front of a limited audience (about half of which was media) at Orlando’s House of Blues. It also cut out the fan portion of the event, which featured video gamers from several different countries playing each other for floor seats at Wrestlemania.

The other big change came because THQ took a year off from the SvR series to create Legends of WrestleMania (released just a few weeks prior). Thus, it was no surprise to see the new game showcased in the competition, and since Legends includes a roster full of old school stars, it was also only natural to get them involved this time around.

The WWE obliged by sending out the likes of Sgt. Slaughter, Ted DiBiase and Dusty Rhodes. But it also went a step further by emphasizing the familial links between the legends and the current generation of performers.

Rhodes was paired up with son Cody, who greeted his son with a hug and a kiss on the cheek. The Million Dollar Man also squared off against Ted Jr. in first round action, and it hardly seemed to matter to the fans that both sons quickly sent their fathers packing.

Other competitors had obvious links to their opponents, with the Bella twins playing each other and storyline father and son Finlay and Hornswoggle also doing battle. There was even time to work some more logical kayfabe elements into the tournament, like when Ezekiel Jackson pretty much rolled over to allow The Brian Kendrick to advance.

The final four saw Legacy teammates Cody Rhodes and DiBiase Jr. in one match while Kendrick took on Kofi Kingston in the other. And when Rhodes and Kingston came out on top, there was one more legendary surprise in store as emcee Howard Finkel introduced Jimmy “The Mouth of the South” Hart to help call the action in the final.

Rhodes played as his dad while Kingston represented himself — current wrestlers from SvR 2009 can be played alongside the legends if users own both games — but Kofi still made a nod to the past by selecting Hart as his manager. That move paid off when Rhodes paid a little too much attention to The Mouth, allowing Kingston to claim the title.

Kingston will hope to avoid the fate of 2008 Challenge winner Elijah Burke, who is no longer employed by the WWE. At the very least, his victory was popular with the fans, making even a scaled-down version of the event seem like it successfully fulfilled its dual purposes of promoting the game and the WWE’s heritage.