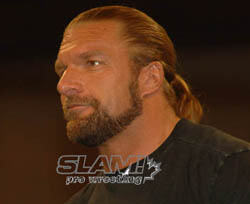 HOUSTON — The last time WrestleMania came to Texas, the fan festival known as Axxess gave people a chance to experience all things WWE in one place. Eight years ago, anyone attending the event could view memorabilia from various eras, browse all kinds of merchandise, participate in Q and A sessions and grab autographs from some of the talent.

Axxess has gone through a number of changes since WrestleMania X-7, including a phase last year when it was more of a traveling road show. The 2009 concept hearkens back to the one from 2001, with the pleasant addition of much more participation from the WWE’s most popular performers.

That was clear from the Friday night session of Axxess, which took over a big chunk of the Reliant Center for four hours. A ring set up in the middle of the floor hosted various events, including Cryme Tyme in a live tag team match and the THQ Superstar challenge video game tournament.

Most popular of all, though, were Q and A sessions with DX — Triple H and Shawn Michaels — and World Heavyweight Champion Edge. That was a far cry from eight years ago, when lower card wrestlers were participating in most of the events. Other weekend sessions this year boasted similar star power, including John Cena and Randy Orton.

The questions asked were mostly safe ones that staff gathered from the fans beforehand. DX stayed in character about half the time, but did speak honestly about their motivations for getting into the business, what it was like to have young people look up to them and how tough it is to come back from injury.

Edge gave fans even more insight into the real Adam Copeland. He broke free from his role as one of the WWE’s top heels completely, acknowledging the fans’ cheers but saying, “You better not cheer for me on Sunday.”

The autograph lines were also packed for the entire session, with four signing stations spread over different parts of the show floor. Each station rotated its two wrestlers out for new ones after two hours, and the list of signees included Jeff and Matt Hardy, Vladimir Kozlov, Cody Rhodes and Ted DiBiase and several WWE Divas.

Other Axxess attractions gave fans a chance to do things like call famous matches from WrestleMania history alongside real WWE announcers (Todd Grisham and Joey Styles helped out on Friday night) and take a walk through the Undertaker’s Graveyard with caskets from all 16 of his WrestleMania victims. Merchandise was also a prominent part of the show, but not to the same degree as in 2001, when the WWE had many more outside licensees.

The chance to see their favorite sports entertainers seemed to be popular with fans on Friday night, who didn’t mind paying $29 a pop and waiting in a line that ran the length of the Reliant Center to get in. VIP tickets for $49 allowed some to skip both the initial line and have Priority Access to the attractions, similar to the line-skipping passes available at some amusement parks.

One potential problem with Axxess is whether a single session is enough to take in everything. Autograph hunters pretty much have to make that their main objective, as the lines were so long that it precluded catching much of anything else.

With sessions running all weekend, some fans dealt with that dilemma by buying tickets to multiple show times, and didn’t seem to balk at doing so.

“This is really the only time most fans get to be this close to the WWE superstars,” said one fan who came all the way from London to experience WrestleMania. “So I have no problem with buying tickets to more than one session.”