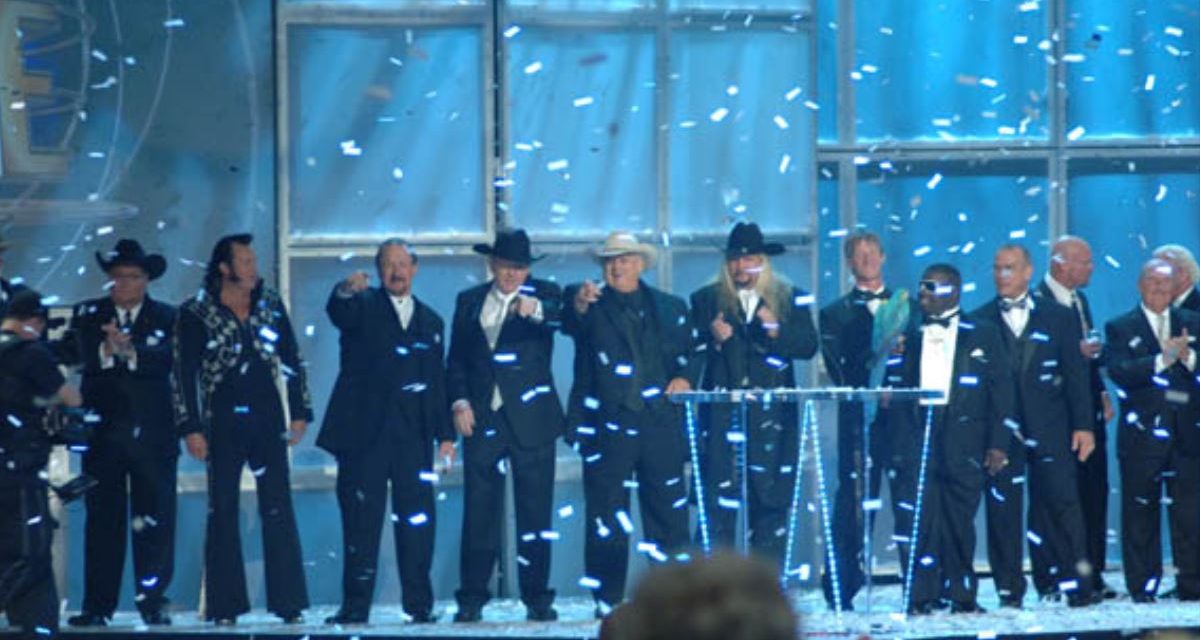 HOUSTON – A night that had a distinct Texas flavor ended fittingly in confetti and beer in honor of one of the state’s favorite pro wrestling sons. 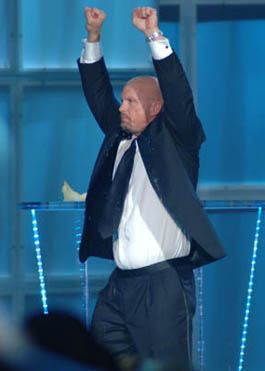 Steve Austin strikes a familiar pose in an unfamiliar outfit at the WWE Hall of Fame. Photos by Mike Mastrandrea

Thousands of fans turned out at the Toyota Center Saturday night to pay tribute to a WWE Hall of Fame class that included famous families like the Funks and the Von Erichs. But the loudest applause and the final honor of the night went to a Texan Vince McMahon introduced as “the most popular superstar in the history of the WWE,” Stone Cold Steve Austin. 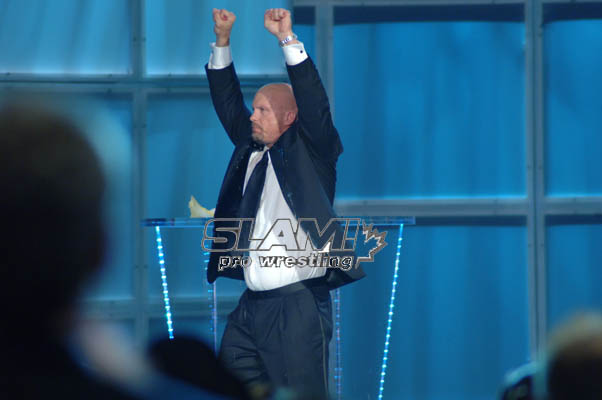 Looking quite a bit different from his wrestling days decked out in a suit – which he immediately poked fun at after losing a button backstage – Austin appeared genuinely grateful for all of the people who helped him achieve an unprecedented fan following during his WWE tenure. He thanked everyone from the video production people to the woman who assisted with his travel arrangements.

Though he shot down the crowd’s pleas for “one more match,” Austin gave a special thank you to everyone who supported him throughout his career and stuck with him through multiple injuries, divorces and other trials.

“Every time I was gone, you people always took me back, and I appreciate that,” Austin said.

Stone Cold also issued a rare apology to fans from Atlanta, discussing the time he “took his ball and went home,” disappearing from the WWE for about a year after no-showing a date in Georgia. Using some trademark self-deprecating humor, he called himself stubborn and likely to cut off his nose to spite his face, but noted that it had worked for him so far. 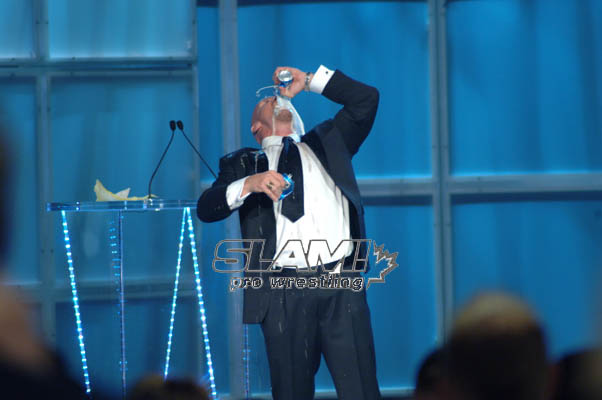 With several movie projects in the pipeline, Austin left little doubt that his immediate future lies in Hollywood. He brought the show to a close by standing amidst a shower of confetti and drinking multiple beers, even sharing one with John Cena.

Before Austin got his time in the spotlight, a much more traditional babyface also entered the Hall when Ricky “The Dragon” Steamboat was introduced by Ric Flair, who called him his greatest wrestling opponent ever. The high praise from the Nature Boy and the warm reaction from the crowd had Steamboat tearing up even before he gave his remarks. 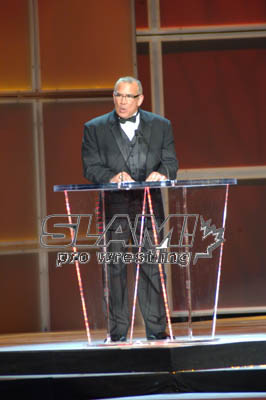 The Dragon graciously deflected much of the credit for his success to the dedication of the men he worked with over the course of his career. He also did a little business, calling out Chris Jericho and promising that he, Roddy Piper and Jimmy Snuka would be “taking you to school tomorrow.”

There were few other in-character moments when it came to the five other individuals or families to join Austin and Steamboat in the Class of 2009. Dory Funk Jr. talked about the pride he had in watching six current WWE wrestlers he helped train succeed, while his always unpredictable brother Terry urged youngsters to stay in school and philosophized about a “universal battle royal” in the next life. 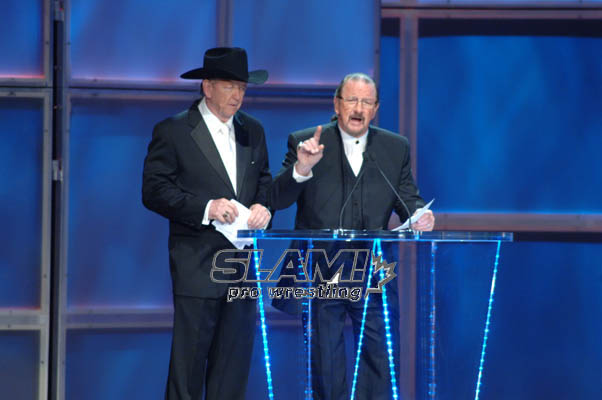 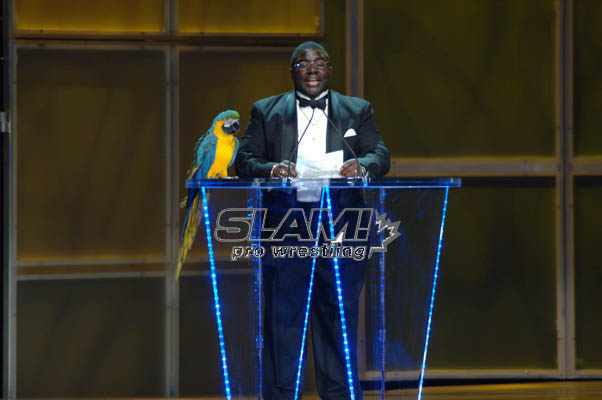 Koko B. Ware and Frankie. Photo by Mike Mastrandrea

Koko B. Ware was almost upstaged by his avian companion Frankie, and ring announcer Howard Finkel gave himself a great send-off using the booming voice that earned him his Hall of Fame nod. 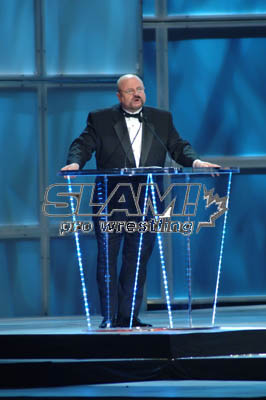 Bill Watts went the furthest past his allotted time thanks to a continuous stream of anecdotes. 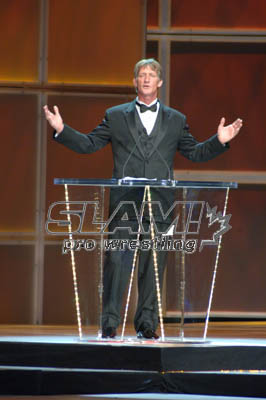 Perhaps the most touching moment of the night was during the induction of the Von Erich family, a posthumous award for father Fritz and all of the brothers except for Kevin. The surviving Von Erich admitted that he wished his family was with him, but he also said that all pro wrestlers are actually brothers, a theme that Flair picked up on later when he inducted Steamboat.