“What doesn’t kill you only makes you stronger” seems to be the motto of both Abdullah the Butcher and Devon “Hannibal” Nicholson.

For five years, fans have followed them from city to city and watched them bleed in every one. Wrestling historians will say that in this day and age, a five-year feud is unprecedented. But Abdullah plans to put out this fire himself, by announcing his retirement from professional wrestling with one last match. And he can’t think of a better opponent than the man who Abdullah calls the Bruiser Brody of this generation, Hannibal. 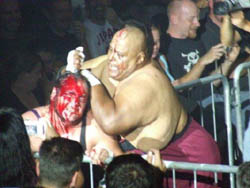 Abdullah the Butcher tears into Hannibal.

Women, children and anyone with a bad heart condition would be best advised to leave the room during this match, because it’s a guarantee that there will be blood and lots of it. Pro wrestling is a thing of the past to these two. This is going to be a fight. On April 4, Abdullah the Butcher will either retire, or die trying during his last bout in Canada, at the NDR Centre in Montreal.

“I have fought this guy in certain places and he has given me a run for my money,” Abdullah told SLAM! Wrestling. “Every time he was kicking my head in, I was thinking about Bruiser Brody. This guy is a vicious wrestler. He doesn’t care what he has to do. He’s really good. Before I leave Canada, I want to prove that I can still get it on with him.”

Nicholson remembers growing up in a house full of Abdullah fans. Both of his parents introduced him to the world of professional wrestling and the first time he laid eyes on Abdullah, it opened his eyes to the brutal side of pro wrestling. He hasn’t looked back since.

“I was very impressed with Abby,” Nicholson said. “He was very merciless and sadistic and he was different than anybody else I had seen at the time, because his style was just so realistic. I remember watching with my parents during Abdullah’s glory days and seeing how violent he was.”

Likewise, Abdullah thinks very highly of Nicholson as well. He’s very impressed by Nicholson’s tenacity and endurance. Most wrestling veterans would not even consider getting into the ring with an opponent who hasn’t really been established. But Abdullah considers it an honour to get the younger generation ready and also prove that he can still go with the young lions.

“I’ve broke bottles over his head and he keeps challenging me. I don’t want to say no to him, but I’ll be there for him. I will give him an ass whoopin’,” Abdullah said. “This kid’s good. And in real life, he can beat you to death anyways.”

During their intense rivalry, both men recall one incident in particular that was more or less the climax of their feud. Abdullah smashed a coffee pot over Hannibal’s head, which split him wide open like a watermelon. The police wanted to stop the match and take Abdullah to jail. Luckily for Abby, it didn’t get that far.

“He didn’t want to go to the hospital, but he had to, because the blood was pumping from his head,” Abdullah said. “They were going to lock me up for hitting him with the bottle.”

That night, Nicholson proved the passion he had for the wrestling business. He didn’t blame anyone and all he wanted was to finish the match. The fact that he chose to wrestle Abdullah again after that is a great illustration of how tough he actually is.

“I lost a tremendous amount of blood that night,” Nicholson said. “A lot of the fans were freaked out, because my head was starting to look like a faucet. We had a lot of success in Puerto Rico following that. Most wrestlers plan out certain spots in matches, but Abby and I just go out there and fight. I basically just go in the ring and beat the s*** out of him.”

Former pro wrestler Adam Firestorm handles video production for a lot of the independent promotions. He’s followed Abdullah’s career for quite some time and is very close friends with Hannibal. He says this feud has brought out the best in both men.

“Abdullah is a very unique type of person. There aren’t very many people around these days who can actually make fans fear them to the point that people run to the exit whenever they come out. Abdullah has that advantage,” Firestorm said. “Hannibal’s a sick guy. He knows what he’s doing in there and Abdullah rarely gets any repeat customers, because not a lot of people want to face him. Hannibal can take whatever punishment Abdullah can dish out and ask for more.”

Firestorm remembers a cameraman asking Abdullah for an autograph one night and Abdullah’s agent told the man that if he even thinks of coming near him with that camera, Abdullah was going to stab him with his fork. Abdullah was never one to break character at a show, but Firestorm says sometimes it was hard to tell if he was serious or not. 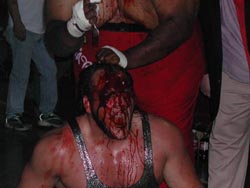 The infamous coffee pot did its job for Abdullah.

“Abdullah is one of the last of a dying breed,” Firestorm said. “The majority of people know this is entertainment, but they will all still get out of his way. He just has that aura.”

So this is how it ends. On April 4, Abdullah will enter a wrestling ring for one of the last times and be prepared to give the fans what they’ve been expecting. Montreal will be a final resting place, as he and Hannibal let the sparks fly and just have at it.

“Abdullah has had other retirement matches before, but he just didn’t want to go out that way,” Nicholson said. “I’m just going to go out there and fight, and give both Abby and the people their moneys worth.”

It means so much to Abdullah to have his final retirement match in Canada. He was born in Windsor and if it started in Canada, he thinks it’s only right to end it in Canada.

“I’ve wrestled a lot of people in Montreal, Canada. I’ve wrestled them all over. As far as I remember, nobody’s beaten me in Canada. So I sure as hell am not going to let this young kid win over me,” Abdullah said. “The man upstairs took care of me for many years. My dream was to wrestle in New York, but the only way I’d be able to wrestle in Madison Square Garden is to probably buy a ticket.”