DiBiase’s book has a price worth paying

With an evil laugh and the flaunting of a roll of hundreds, he once told millions of wrestling fans around the globe they all had a price as he lauded the almighty dollar. Now a Baptist minister, he preaches a new gospel to his flock as he spreads the word of God. 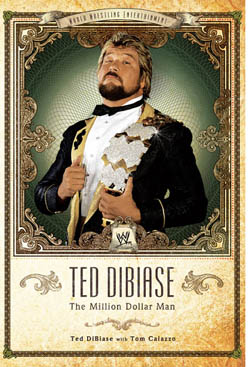 In his self-titled autobiography, co-authored by Tom Caiazzo, the WWF’s one-time “Million Dollar Man” Ted DiBiase paints a picture of a man born into the wrestling business who would star as a top talent before eventually turning to religion to save himself from its excesses.

DiBiase grew up wanting to follow in his parents’ footsteps. His mother, Gladys Helen Nevins (a.k.a. Helen Hild), and step-father, “Iron” Mike DiBiase, were both professional wrestlers. The business had a profound effect on his formative years, and DiBiase would spend his early childhood immersed in the sport, moving from territory to territory. From the time he was in kindergarten, DiBiase had moved eight times in seven years. When he was 15, “Iron” Mike died in the ring.

But wrestling remained in his life as a good friend of “Iron” Mike’s swooped in to take the younger DiBiase under his wing. His name was Terry Funk. Funk steered DiBiase, a young man blazing a trail in high school football, to West Texas State University. What he didn’t know was DiBiase’s ulterior motive for choosing that school. In addition to its fantastic football program, West Texas State owned an impressive alumni of professional wrestlers. Much to Funk’s chagrin, DiBiase would drop out of college to follow Dick Murdoch to Bill Watts’ Mid-South Territory. With DiBiase’s lineage, football background, and many contacts — most of whom knew and respected “Iron” Mike — he had no trouble breaking into the business.

DiBiase’s career would blossom in the NWA but it was in New York, where he donned the “Million Dollar Man” gimmick, that he reached the pinnacle of his success. But in spite of his riches and wrestling achievements (winning three tag titles with Mike Rotunda, a.k.a. Irwin R. Shyster), his personal life was crumbling. DiBiase does not shy away from admitting that notoriety and wealth went to his head, and points out he became his character as he blew stacks of cash drinking and carousing his nights away. It was only when his wife Melanie confronted him about his adultery that he began to turn back to his boyhood religious roots. (He quit the WWF shortly thereafter and that same year, a serious neck injury suffered on a Japanese wrestling trip ended his in-ring career permanently.)Although DiBiase was lured back to wrestling (as would occur on several occasions), he never relived those previous heady days, as he commentated and managed in WWF for a couple years before heading to WCW, where in time he would be relegated to doing little more than carrying Hulk Hogan’s belt to the ring. Even after spending the five years following WCW’s demise travelling across North America sharing his testimony about Christ, he went back to wrestling, but this time in a backstage role. DiBiase’s take on how much wrestling changed from his days as a talent are little different from most retired wrestlers who no longer recognize the modern era where drama and scripted dialogue overshadow actual matches. But because his assessment does not contain a hint of resentment (despite being let go from his post on the creative and production teams after only one year), his comments come across as genuine and engaging.

DiBiase, who has gone back to full-time preaching, spends most of his book describing his origins and his wrestling career, and only speaks about religion when explaining how his path changed and why it did so. There is no sermonizing in this well paced, bitter-free 241-page book, unlike, say, his first autobiography, Every Man Has His Price, which came out in 1998, before the wrestling book boom, from Multnomah Publishers, Inc.His latest book is the tale of a man who appreciates everything he has been given and does not dwell on the negatives of wrestling like so many others before him have done. Perhaps his gratitude reflects his faith. In any case, DiBiase leaves no confusion about how just about every facet of the business he lived and breathed delighted him. It should then come as no surprise that the comments interspersed throughout the book from some of wrestling’s biggest names put over DiBiase with glowing praise, revealing the former heel was underneath it all truly a fan favourite.