Colleagues and fans had a lot of respect for Steve Doll, who died in a Nashville hospital on March 22 at the age of 48. An obituary in The Tennessean reported he passed away in his sleep due to complications from previous surgeries, surrounded by his family.

Originally from Dallas, Texas, Doll began training to be a professional wrestler in 1984 and debuted the following year. He won numerous tag team titles with Pacific Northwest Wrestling in the late 1980s and early ’90s. The Southern Rockers was his most famous team and one he formed with Scott Peterson. Later, Rex King (a.k.a. Timothy Smith) replaced Peterson. 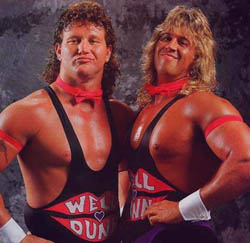 The Southern Rockers were a knockoff of the Rock’n’Roll Express, but that didn’t matter, said Mike Rodgers, editor of Ring Around the Northwest newsletter. “It really clicked here because Northwest fans hadn’t seen it before,” he said. “Doll provided the leadership of the team, was very underrated, was good on the mic. If he had been bigger, he very well could have made some serious money in the business.”

“Steve was great in Portland, and around forever,” recalled Pacific Northwest fan (and occasional SLAM! Wrestling contributor) Kurt Nielsen. “The Southern Rockers (both versions) finally gave us PNW fans a world-class tag team that we could watch on a regular basis. I’ll always have fond memories of Steve’s work.

Doll and King tagged together for a decade, including when they teamed as Steven Dunn and Timothy Well to form Well Dunn, primarily an undercard team with the WWF. Doll also wrestled with WCW, and was competing in a match when Scott Hall arrived to start the nWo angle in 1996.

Reno Riggins (a.k.a. Neal Hargrove) and Doll teamed up in the late 1990s, wrestling as the Tennessee Volunteers (a.k.a. “The Volz”) in Music City Wrestling. The two were also good friends and Riggins was at Doll’s side at the time of the latter’s death. He claimed Doll’s problems began some time after back surgery, for in 2007, Doll was hospitalized again following a seizure from an intestinal blockage.

“I had the pleasure of wrestling him on many occasions and enjoyed every match,” said Ken Wayne, who now runs “Nightmare” Ken Wayne’s School of Professional Wrestling. “I don’t recall ever seeing him in a bad mood or complain about anything, even when he broke his nose on Memphis TV. I hated to hear about his health problems over the last few years and I am even more saddened by his death. A really great guy has left us and he will be missed.”

Colonel DeBeers (a.k.a. Ed Wiskoski) said that when Doll first came to Northwest, he carried the “Von Erich attitude of ‘how can I beat you two straight falls and still look strong,’ or ‘if I’m going over I should have 99% of the match and win too.'”

“Being the businessman he was, Steve learned quickly how the game worked and turned into a really enjoyable guy to work with,” DeBeers added. “I was in and out during his time up here and was married beside that, so me partying with a guy like him would not have been a good thing for my delicate marriage. But I knew him well enough to say he was a good worker who did not have an attitude.”

Doll’s survivors include his wife, parents and a sister. Funeral services will be held Thursday in Nashville.