He is known around the world as the Canadian musical wonder K-OS, but before he envisioned constructing musical soundscapes, he was cheering on his favorite wrestlers during the 1980s Rock ‘n’ Wrestling era. On the brink of the release of his fourth album, K-OS revisited a few of his Wrestlemania memories. 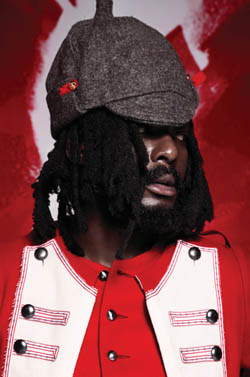 For the 37-year-old Kevin Brereton [a.k.a. K-OS] and his generation, the world was turned upside down in November 1986 when Ricky “The Dragon” Steamboat suffered the traumatic injury to the larynx, courtesy of the vicious Randy “Macho Man” Savage double axe-handle ring-bell shot heard around the world. It was shocking footage for its time and would set up one of the great feuds and perhaps the greatest Wrestlemania match in history. It’s a moment he remembers, among many.

Though not too keen on much of today’s product, as a kid Brereton was swept up by the larger than life wrestling characters. “I was an old WWF wrestling fan back in the day,” he explained nostalgically. “Like Rowdy Roddy Piper, Ricky Steamboat and the British Bulldogs. I’m from that era of jumping off my balcony during The Main Event. But after the characters kind of got less flamboyant, I lost interest pretty fast.”

Perhaps, in a small way, it helped him become who he is today — rapper, singer, songwriter, and producer.

He usually performs with a live band — not a la Vince McMahon in Stand Back — but more like the Honkytonk Man in Cool, Cocky, Bad — with an abundance of attitude, information and an unapologetic delivery.

Asked about his favorite WrestleMania moments, the three-time Juno award winner joyfully rebelled in sifting through some of them.

“I remember enough. I think probably the best one was when… Hmm, that’s a tough one,” he pondered, after a few beats.

“I think aside from guys like Steamboat and Piper and good wrestlers turning bad which was always traumatic for me, I think that my greatest Wrestlemania moment was Jake ‘The Snake’ Roberts … Give me five seconds … They’re all in the annals of my mind,” he confessed.

“Andre the Giant and Hulk Hogan was just crazy.”

It was more than just pinfalls and the main events. It was also about those who got the job done, week in and week out.

“You know who else I liked? Lanny Poffo. He was kind of like a hip-hopper, because he used to write those poems and throw out those frisbees.

“He’d be like, ‘I leap and I bound, and I twirl around, and today I am going to take so-and-so to the ground.’ Then he would throw the frisbees.

“And the other dude, Koko B. Ware, which I was kind of embarrassed of, but he was hilarious as well with his bird dance. You don’t get entertainment like that anymore. Shameless entertainment.”

The Birdman received the call for Hall of Fame induction at Wrestlemania 25. Brereton overcame adolescent insecurity and fulfilled his calling as a dispatcher of information over musical lines as the artist K-OS [Knowledge of Self]. Much like Koko, he realized the business of paying dues early on.

Yes!, set for release March 31, is 12 tracks deep. The current Vancouver native’s latest single is 4321, and the music video for it was shot in Toronto’s Dufferin Mall.