Fans may know Kevin Fertig as Kevin Thorn, but perhaps they should know him as Brian Pillman. Like the former “Loose Cannon,” Fertig has successfully sought a departure from a major wresting company in pursuit of creative freedom. The former vampire character on ECW has vowed that his leave of WWE is “only the beginning.”

A former fan of Jerry Jarrett’s USWA, Fertig got started in the wrestling business in Memphis, TN. “It was always something I watched, but not something I had a dream of doing. I started working at Gold’s Gym at 18 and one thing led to another. Sid Vicious was in there at the time working out. Our workout partners were missing and we worked out together. Then we worked out together for months. I was just working out with him and not trying to get intro the wrestling business.” 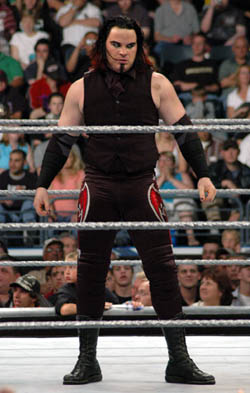 Kevin Thorn in May 2007. Photo by Mike Mastrandrea

“One day he asked me to go out to Buddy Wayne’s house. Wayne had a ring in his backyard. I had thoughts of what a wrestling ring would be like and that wasn’t it. The ring was worn down and actually had rats in it.”

Fertig’s first WWE character, Mordecai, was the brainchild of Vince McMahon and Fertig. “I had always done something called Seven and it basically was about the seven deadly sins. At the time Travis Tomko and I were tagging and we thought we would be a tag team. We had been on the road six months doing dark matches and house shows. Then Vince wanted us as single stars. They went with Travis as Christian’s bodyguard. For me, they liked the idea of a huge hypocrite who was a religious bigot. Everybody always thinks black is bad, so I was thinking why can’t I wear all white? White cars, white clothes, I was living the gimmick. The vision was that I was perfectly clean.”

“If I had been more prepared for Mordecai it was have been phenomenal. I was, like, 300 pounds and swollen. I think it hindered me a lot because my body frame was not able to handle that weight. They told me, ‘We’re no longer going ahead with your character.’ I had got into a fight in a bar a few weeks before it started and put a kid in the hospital. I was in lawsuits and they had to protect themselves. They sent me back to OVW to deal with it. I had to deal with it.”

With the addition of a third brand to WWE’s television lineup, ECW on Sci-Fi, Fertig reemerged as the vampire character Kevin Thorn. “Sci-Fi wanted an alien, a monster, a zombie, and things like that. Tommy Dreamer called me and said, ‘Look I think this will be a great thing. They want to do a faction with you Gangrel, and Shelly Martinez as vampires.’ I didn’t know how long it would last because they did spoofs with the others. They stuck Shelly with me and we had a look that nobody else had. The majority of our fans go to Hot Topic. They have been to a rave once or twice in their life. Vampires are in. True Blood on HBO their first season was a success, and the second season is on its way. The vampire culture has been a part of America as long as I can remember.”

When Fertig emerged on television with Martinez — known as Ariel, the two enjoyed immediate chemistry. “She was great. On screen she was it. You could not pick a better chick on it. Backstage we had a brother sister kind of relationship. We had our fights. It was like this love-hate thing. When we walked through that curtain it was always on.”

Although Fertig respects Paul Heyman, his favorite time in WWE was when Dusty Rhodes was booking ECW. “I watched a lot of stuff from Kevin Sullivan. Dusty had these ideas of me and Punk doing some of the Dusty-Sullivan stuff, like the spike to the eye. He kept being turned down because Vince hates vampires. I did promo after promo in the promo room with Dusty. Dusty would tell me, ‘You can talk. You can work. I just need to get this passed.’ When a guy like the American Dream tells you he would have made money with you, it’s a big compliment.”

One of Fertig’s career highlights was competing at Wrestlemania 23. At the time, Fertig was a member of the New Breed along with Matt Striker, Elijah Burke, and Marcus Cor Von. Fertig enjoyed teaming with his partners against ECW originals Tommy Dreamer, Sandman, Rob Van Dam, and Sabu.

“There could have been so much more done with it. It was an eclectic mix of individuals. Elijah thought he was the leader. We had the teacher. And Shelly and me. I was the muscle. After Wrestlemania, we were in Ft. Wayne, Indiana, and we had one hell of an extreme rules match. It was the match we were supposed to have at Wrestlemania, but they were afraid we would steal the show. They used it to start building (CM) Punk, which could have been done differently. I lost to Punk and quit the New Breed.”

At the heart of Fertig’s discontent is WWE’s unwillingness to push a gothic character. “They could have made me a babyface, but the ball got dropped. The agents said I was too much of a heel. They assumed black meant you were a heel. Before November I did the blog and it was like a big FU. I wanted to get fired. I did the blog saying I just wanted to be me. Plain old guys don’t get over unless Vince wants to push them to the moon and he only likes guys with the same look.”

“I decided that I was going to start a brotherhood on their WWE Universe blog. I am a nice guy; I stick up for the abused and picked on. We are all brothers and sisters and we have all been picked on at some point in our life by someone who didn’t want us to succeed. I had 80,000 views. Why in the hell would a guy who hasn’t been on TV in a year get this much traffic on a WWE Universe site? I had 80,000 views. The top guys didn’t have that many. They had petitions and fan sites starting brotherhood factions. According to them nobody cared. I proved them wrong without any TV time.”

Fertig is friends with Matt and Jeff Hardy and feels they have also been victims of Vince McMahon’s prejudices when it comes to the looks of wrestlers. “You look at the Hardys and how many times did they try to stop it. There has to be a time when they listen to fans.”

One McMahon favorite that Fertig does admire is John Cena. “I think John is phenomenal. He is the hardest working man in the business today. There are so many haters. He is the next generation’s Hulk Hogan. He gives it all every time. It is like Hogan. He wasn’t the greatest wrestler but he knew what worked for him. John Cena is a great entertainer.” 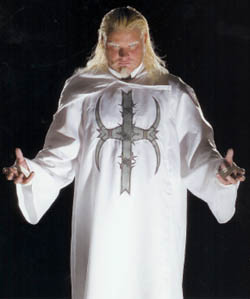 “Who is the guy in the main event every night that leaves the Arena at 12:30 and wakes up at 7:00 and does media for three hours and Make-a-Wish stuff? He still shakes everybody’s hand. He’ll bong a beer. On the overseas trips, sometimes the guys go to get a few drinks (and) there is no bill to be had and John is walking to his room and going to sleep (having covered the bill). He’s what a wrestler should be like and treats everybody with respect.”

Top acts like Cena and Randy Orton do have influence over McMahon in Fertig’s opinion. “I think Cena has a lot (of power) and Randy is getting a lot. Those are two guys that are cornerstones and futures of the business. They have a lot of say. They have the ability to influence where others go. Just a side comment to Vince can change what happens to others.”

Vince McMahon was not someone Fertig was close to. “You are not in his inner circle until you are a top guy. He just looks at you like so and so until you make him a lot of money.”

“At that time it was like Vince would come up to me one day and say, ‘Get the red out of your head. You wear a red tie. A red tie looks comical. Lose the eye liner. The eye liner looks comical. We want you in all black.’ So then one night ECW is taped after Smackdown. The Undertaker Undertaker had just got done. I wrestled first against KC James. I am getting yelled and screamed at for trying to be like Undertaker for wearing all black. Then it trickles down because everybody else is a yes man. I apologized to Undertaker and he said, ‘Why? It’s part of your gimmick, you never disrespected me.’ Johnny (Laurinaitus) grabs me and I told him Vince is the one who told me to do this and wear all black.”

Plans were actually on the table for Fertig to join some other wrestlers in a feud with the Undertaker in 2008. “In September I had hip surgery. I had tore some cartilage when ECW started. I didn’t want to lose my spot and I kept working on it. I called the office and told them I need to get this fixed. Doctors said six to seven months until I can get in the ring. The office called and said they had this great idea. I said I could get back in two months if I need to. Two months go by. I kept calling and sitting at home. Undertaker went to bat for it and someone got in Vince’s ear and shot it down.”

Following this disappointment, Fertig sat at home inactive before asking to be let go. “I called them in ten times since October and never called back. I said no hard feelings I just want to work. I don’t want to sit at home and collect a pay check. I know I have something to offer. Sitting at home, I wasn’t putting any money in the bank.”

On April 5, 2009, Fertig’s contract runs out. Ring of Honor and TNA serve as potential destinations. “I can’t really talk to anybody until April 5. I went to a ROH show two weeks ago. They have phenomenal athletes and they drive all over the country to do what they love. TNA is becoming a bigger threat by the day. With Abyss, (Matt) Morgan, some of those guys, I could be a good fit. I want to go to a company and do my character my way. I want to prove how wrong WWE is.”

A tour of Europe is in Fertig’s immediate future and he is considering competing in Mexico and Puerto Rico. “After April 5, 2009, I am going to prove a point and people want to book me please contact me. I come I give 100% regardless of crowd size. To the people who supported in WWE in the brotherhood I know I have been away for a while I am going to get the ball rolling again. This is definitely not the end of me it’s the beginning — I promise.”

Matt Johnson is a researcher and historian of World Championship Wrestling. He graduated from Northern Michigan University with a double major in English and Social Studies and can be e-mailed at [email protected]