When the call came that he had been released by WWE, Kizarny (real name Nick Cvjetkovich) was dumbfounded. As far as he knew, everything was rolling along fine.

“All the producers and agents were giving me great write-ups,” said Cvjetkovich. “The writers liked me. I got along great with the wrestlers. Everybody seemed to be cool and I was having a blast. It hit me out of left field.” 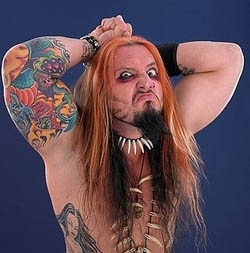 Cvjetkovich believes it could have just been a move on WWE’s behalf to trim their budget, but also feels he was a victim of the confusion between Vince McMahon and the rest of the WWE writers and producers over the direction of his character.

“All the writers and everybody took me as a villain when Vince McMahon saw me as a good guy,” said Cvjetkovich. “The running gag was utter confusion. Between that and budget cuts, I think that was my temporary demise.”

His character was supposed to be Doink the Clown meets Rob Zombie, or as Cvjetkovich puts it: if Jake “The Snake” Roberts and Doink produced a lovechild.

In reality though, his gimmick is largely based on his real personality.

“I will keep a lot of aspects of Kizarny because that is me and the aspects I didn’t like I will discard,” said Cvjetkovich. “I sort of giggle when I hear the word character because I wasn’t saddled with any specific gimmick. If I was to quit wrestling tomorrow and be a plumber or a lawyer or an astronaut, you’d get someone fixing your toilet or flying the spaceship that has all these tattoos and long hair and goatee and crazy costumes and stuff. All the sideshow stuff, that wasn’t WWE’s brainchild, I’m a legit sideshow performer. Sinn, Kizarny, it’s all me.”

Cvjetkovich, under his former ring name Sinn Bodhi will now return to the independent scene as well as wrestle abroad, making his first appearance since his release with Carlos Colon’s WWC promotion in Puerto Rico and also hopes to tour Japan. He is open to North American options such as a return to TNA and a Ring of Honor debut, but has yet to explore these avenues.

“I’d be happy to perform for anybody that owns a ring,” he said.

Starting June 18, Cvjetkovich will join the Jim Rose Circus vs. Jake ‘The Snake’ Roberts tour, which will feature sideshow circus acts competing with hardcore pro wrestling — particularly a nightly main event of Cvjetkovich versus Roberts — in a battle to top one another.

“Picture something with a lot of circus stunts and crazy feats of pain mixed with some really weird trippy hardcore and lots of mayhem,” said Cvjetkovich. “And it’s Jake ‘The Snake’, so anything goes.”

In the same week that Kizarny was released from WWE, so to was The Boogeyman, bringing to question whether far out gimmicks like these can work in today’s WWE.

“I absolutely think they can work,” said Cvjetkovich. “It’s just a matter of what they’re [WWE] inclined to do. They say that they want to get away from the ’80s style of wrestling, which is fine. I think some things don’t work nowadays that worked back then, but I think a lot of stuff still does work.”

Cvjetkovich, whose favourite era of wrestling was the ’80s, believes that wrestling today can offer a unique blend of athletic competition and characters, storylines and soap opera drama that still appeal to kids and adults, much in the same way that the product during his youth did.

“If I want to watch two guys just beat the crap out of each other for no good reason, I’ll go watch drunken street fights on YouTube or I’ll go watch MMA or something,” said Cvjetkovich. “To me, wrestling is full contact theatre. It’s a movie that is really happening in real time. As a kid growing up, it was wrestling and comic books. Wanting to be a wrestler was kind of the closest to being a real-life superhero or supervillain. I still think that today.”

Regardless of where he ends up, the former sideshow performer is sure to leave an impression on his audience.

“It’s my priority number one to have an entertaining match,” said Cvjetkovich. “Win, lose, or draw, good guy or bad guy, that to me is the big thing. I don’t go out there and make sure I score a victory. Winning is nice, but entertaining is better.”