Legends of WrestleMania for XBox a good start 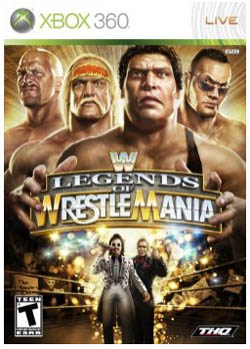 Looks like there may be a nice future for wrestling video games after all. After a horrible and redundant version of Raw vs Smackdown 2009 hit the XBox 360 last year, TNA followed with one of the worst wrestling video games in recent memory. But this one… this Legends of WrestleMania is different.

WWE and THQ have partnered up once again to create Legends of WrestleMania. The game is a lot more fun than Raw vs Smackdown, but does have its flaws. For one, the mechanics of executing moves, reversing moves, and just all things moves related needs a little work. After playing the game for two or three hours I dare say I may have finally gotten the hang of it, but it doesn’t capitalize on the Xbox 360 controller — several buttons go basically unused.

But let’s start off with the good things. First of all, if you’re looking for a hit of nostalgia, this is definitely the game for you. In “Re-Live” mode, you get to relive memorable ‘Mania matches, like Hulk Hogan vs King Kong Bundy, Hogan vs Andre the Giant, Hogan vs Ultimate Warrior, Hogan vs Sgt. Slaughter, Bret Hart vs “Stone Cold” Steve Austin, Austin vs Shawn Michaels, Austin vs The Rock, and so on. Before you play each match, you get to watch a video of the build up to the match, as well as highlights of the actual match. Then, it’s up to you to recreate the magic. You are given a list of objectives before each match. The more you complete the better, but in the end if you win the match, you move on to the next.

There is also the Legend Killer mode, in which you create a Legend and start from the bottom, competing in gauntlet matches and wrestling the likes of Jim Neidhart and Junkyard Dog. As you rank up, you’ll start wrestling guys like Bret Hart, Ric Flair, Hulk Hogan, and the upper echelon members of the roster. While not quite as detailed as Raw vs Smackdown, creating a Legend is a lot more to the point. Creating an Entrance is very quick and there is almost no loading time, so it becomes enjoyable rather than frustrating.

This game is visually stunning. The crowd looks a little weak but the wrestlers themselves look larger than life. One of my favorite things is that when you wrestle in the earlier WrestleManias, they cover all their bases. Howard Finkel introduces each wrestler, they come out in those mini-ring trolly things that they used to come out on, and their names appear on the screen with old school text — you know, that yellow lettering in a generic font. Fantastic. As you progress, so does the environment. WrestleMania 2, for example, looks much different than WrestleMania 13.

The audio is also incredible. All of the old school theme songs are in this game. The only one that is noticeably different is Big Bossman‘s — he comes out to that redundant theme song he used in the late ’90s in the WWE, rather than that “If you ever take a trip down to Cobb County, Georgia…” work of musical art from the ’80s. Regardless, the music sucks you in from the minute the game starts up; a random theme song plays while you browse the menu.

Another great thing this game has going for it — manager’s actually make a difference! This isn’t like Raw vs Smackdown where some random wrestler is assigned to be your manager, and he basically beats the snot out of your opponent when you ask him to. In this game, Bobby Heenan becomes an actual pest. He’ll get up on the apron, you’ll knock him down, but Andre the Giant will clock you one from behind and The Brain will have served his purpose. And it’s all done seemlessly — you don’t feel like you’ve just unlocked a cut scene, it actually flows properly.

For all it’s good points, though, as mentioned above it does have its flaws. For example, the controls really do suck. You have to tap buttons in sequence as they pop up on the screen — but if your opponent hits the button first, the move gets reversed. Sounds like a good concept, but the buttons pop up randomly and you have 0.2 seconds to react. Nine times out of ten your opponent wins the exchange.

Replayability is also an issue. This is a renter, not a buyer. You’ll have the game finished in a week, and aside from the terrific graphics and audio, the gameplay itself leaves something to be desired.

Noticeably absent from this game: Randy “Macho Man” Savage. They’re releasing a DVD of the guy, but they can’t put him in this game? Sad.

Nonetheless, the game is worth a try and it is definitely something for THQ to build on.