The Sheik still lives … in Florida

In the 1960s, The Original Sheik was perhaps the most violent character that the professional wrestling business had ever produced. He would make fans tremble with fear, by tossing chairs and fireballs their way. In the ring, he was a madman. He used every foreign object imaginable, from chairs to pencils to fire. Everyone hated him, but they would still pay money to come to the arenas, hoping that he would lose.

The man who portrayed that Sheik, Ed Farhat, died on January 18, 2003. But The Sheik is still wreaking havoc. 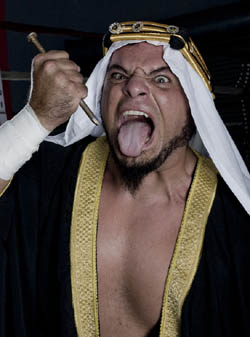 Wrestling history is rife with Sheiks of all sorts, with curly-toed shoes, Arabian headdresses and spitting vitriol. But the current Sheik, Joseph Cabibbo, makes it believable. Cabibbo resurrected The Sheik gimmick as a living tribute to Farhat. He’s been using it for years on the independent circuit.

“I spoke to The Sheik’s nephew, Sabu, backstage at an event one time,” Cabibbo told SLAM! Wrestling. “I had known him prior to this and I told him that I was doing a tribute gimmick to his uncle. I said I was calling myself Sheik Ali Azzad and he said I should drop the Ali Azzad and just go with The Sheik. I said I didn’t want to use his gimmick name, but Sabu told me it would be better if I did. So I got his blessing and that’s all I needed.”

Cabibbo fell in love with pro wrestling at the age of three. He was sitting on the back of his brother’s motorcycle and he burnt himself very badly. He ran in the house crying, until he caught a glimpse of Dusty Rhodes on the television. The tears drifted away and Cabibbo’s eyes were glued to the TV. He was hooked. 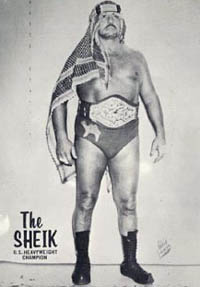 “My father used to take me to the arenas in those days and I loved seeing all of my favourites like Dusty and Abdullah the Butcher and Bruiser Brody and Terry Funk. I went as often as possible,” Cabibbo said. “It got to the point that if I wasn’t there, the wrestlers would ask about me and wonder if I was sick.”

Now at 34, Cabibbo is a part of the business that he grew up with. At 5-foot-10, and 225 pounds, even Cabibbo’s tale of the tape is similar to Farhat’s. The funny thing is Cabibbo is the respected owner of a construction company and tanning salon. But much like Farhat, he is hated as a wrestler, because of his gimmick, and he loves it.

Cabibbo says that every wrestler tries to pattern their style after their favourites and he’s no different. But not everything he does is directly related to The Original Sheik. Cabibbo does have an “old-school” mindset, but he does a masterful job of making an old-fashioned gimmick relevant to the current fan base.

“In these days, if I were to throw fireballs at people in public, I’d be arrested. But I do try to keep a low profile and stay in character in a public environment. I wouldn’t be smiling or anything,” Cabibbo said. “I come out like a madman and it’s very interactive. Children are scared of me and it gets to the point where people start to run for the exit door when I come out.”

The Sheik can certainly be described as an attention getter. NWA Midwest Promoter Ed Chuman definitely has his eyes on the up-and-comer.

“He’s absolutely terrific,” Chuman said. “He’s having knockdown fights all over Florida and Puerto Rico, been selling out with Savio Vega … fighting out of the arena, out on the street.”

Chuman is very high on Cabibbo’s gimmick and is hopeful that The Sheik will be one of the NWA’s biggest attractions. According to Chuman, Cabibbo has already proven himself and is ready to make his mark in the promotion. 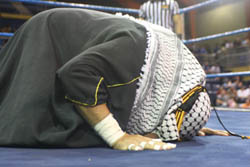 The ritual of pre-match prayer.

“He’s going to TV,” Chuman said. “I’m putting money into him and bringing him up to my territory and sending him to TV.”

Most wrestlers in the business who aspire to be the best, have to learn from the best and Cabibbo is no exception. He’s been through his fair share of hard knocks and credits a handful of veterans such as Bushwacker Luke, Prince Iaukea, Savio Vega and John Tenta among others. But he credits Casey Thompson, who teaches at Blackjack Mulligan’s school, for teaching him the most valuable lesson of all.

“I started as part of a tag team called The Black Market with Shawn Ambrosino and we trained with John Tenta, who was Earthquake and his partner Typhoon and I told them that we were the best tag team. They kind of looked at me like they didn’t believe me, but after being in the ring with us, Tenta said we very well may be the best tag team,” Cabibbo said. “At Blackjack Mulligan’s school, we would learn to take clotheslines and it was almost like driving, where one person had to be in the left lane and one person had to be in the right lane. If we were in the wrong lane, they would purposely pop us in the nose and try to injure us, to make sure that we did it properly the next time. There were a handful of veterans on the outside who would constantly tag each other in and we had to keep selling for them. It was a relentless beating we took for over an hour, but it taught us respect for the business.” 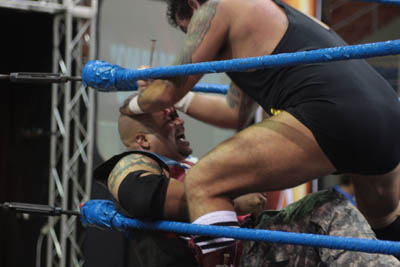 The Sheik is willing to carve his way to the top.

David Marquez, who is a producer of the NWA Midwest territory, agrees with Chuman’s point that The Sheik is one of the most unique and interesting characters in wrestling today.

“The guy’s a madman,” Marquez said. “Joe and The Sheik have two different personalities. Joe’s a good guy, but The Sheik’s an asshole.”

The Sheik may be an entertainer, but Marquez says he gives fans an idea that it’s real, just like The Original Sheik did. He says Cabibbo is playing a character, but he does it so well.

“I would like to see him on top of what we’re doing. He could be a big star,” Marquez said. “The colour that goes with his personality is unbelievable and we look forward to every time we bring in personalities like The Sheik.”

The Sheik’s publicist, Shannon Rose, knows both The Sheik and Joseph Cabibbo probably better than anybody. Rose has been in the wrestling business since he was 12 and has seen a lot of great personalities and considers The Sheik to be one of the top names on that list. 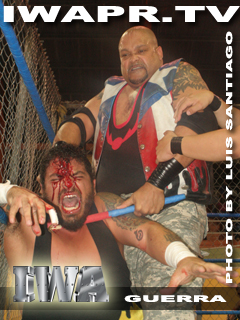 Rose also assists Cabibbo as a PR representative of Cabibbo’s Florida-based promotion Pro Wrestling Fusion. Rose says even though some people fear The Sheik, they always look forward to the show, because they either want to see him lose or they are just curious to see what he’ll do next.

“Everybody’s scared of The Sheik, but in the wrestling business, you’ve got to have a face and you’ve got to have a heel,” Rose said. “I usually have to even look over my shoulder because he’s so unpredictable. He’ll be swinging chairs and barricades around and you never know what he’s going to do. Too many people are wise to the business these days. A wrestler is like a magician, because you come to see the magic trick, but you don’t want to know the magician’s secrets. Joey just puts a lot of passion into his character.”

Whenever a wrestler attempts to pull off a gimmick that’s previously been done successfully, there is always a concern that it might not be as good as the original. Cabibbo is aware of the risk, but does not consider it a problem. He says that while his gimmick is The Sheik, he emulates a bit of everybody, so nobody thinks of making that comparison.

“I kind of embrace the old school and do The Sheik gimmick as a tribute, but I don’t watch tapes of him, because I don’t want to try to do what he does in the ring,” Cabibbo said.

Cabibbo hopes to travel internationally in the future. He intends to travel to Japan and England one day to learn more styles of wrestling. Cabibbo currently runs the Pro Wrestling Fusion promotion in Florida and should be making his debut soon in NWA Midwest.