An Evening with Ric Flair days away 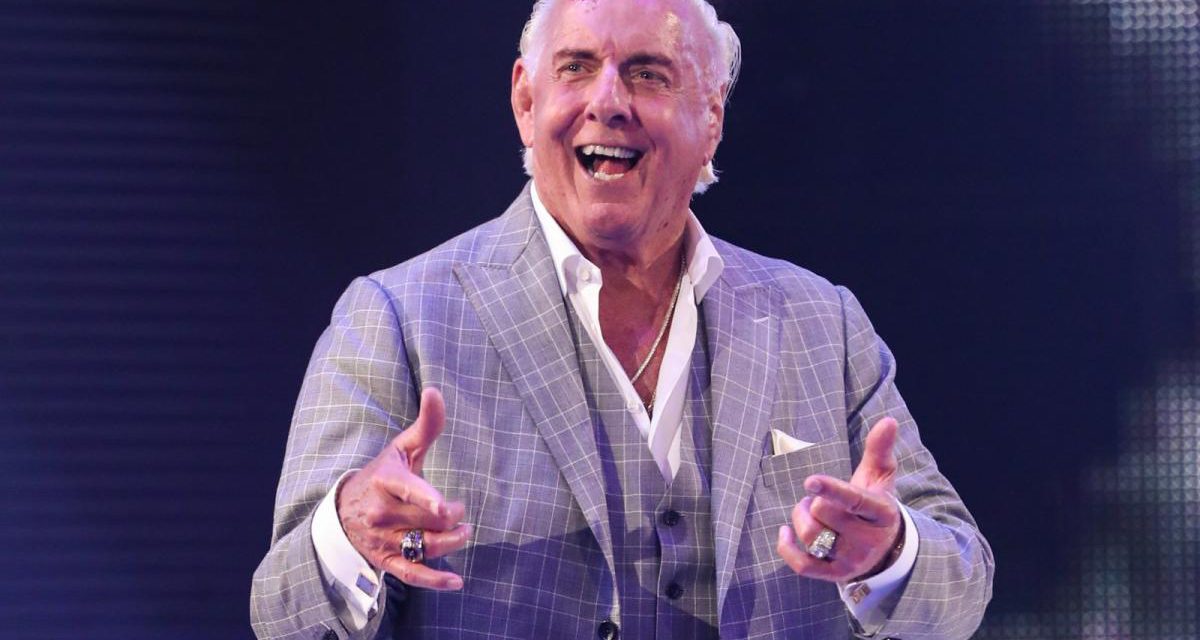 You’ve probably watched shoot interview DVDs or even read interviews here on SLAM! Wrestling with your favorite wrestler and thought, “I wish I could ask a question.” For fans of Ric Flair, that opportunity will be available Saturday night, February 7th, when “The Nature Boy” appears for a speaking engagement at the Myer Horowitz Theatre in Edmonton. 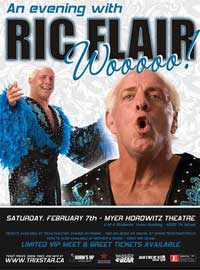 A promo poster for Ric Flair’s upcoming visit to Edmonton.

The event is the brainchild of local concert promoter and lifelong wrestling fan Kevin Radomski, who was inspired after attending a lecture with director Kevin Smith.

“I really wanted to emulate what I saw with an Evening with Kevin Smith. He was so flexible; he talked about gay rights, homosexuality, and his favorite movies all in the same sentence. In seeing that, that is what I wanted Ric to do. I contacted Ric Flair’s management and said, ‘I think this guy’s story needs to be heard.’ If there is one person who can go all night with stories, it’s Ric Flair.”

So began three months of negotiations before tickets went on sale on November 15, 2008. Radomski admits promoting the event hasn’t been without its challenges.

“The biggest challenge I have seen so far is the education. I hang up a poster and have actually heard women say, ‘Why is that guy wearing a bath robe?’ You take for granted that even being a quasi-wrestling fan, everyone knows who Ric Flair is. It is a good observation that Alberta as a whole is a great market for wrestling, but not for the NWA. I think that was a challenge we didn’t see. Another challenge is that wrestlers do things a lot differently than rock bands. My background is in concert promoting and the rules wrestlers play by are specific to wrestling. A rock band is more concerned about how much beer they get before, after and during the show. Ric Flair couldn’t really care less about the drink. When he promotes himself as a ‘limousine riding, lear jet flying son of a gun’ that is exactly what he is. It is not fake or a face. He flies first class everywhere he goes, his hotel room has to be a suite.”

When told that the going price I’ve heard for Flair is $10,000 USD per appearance, Radomski laughed.

“It is substantially more then that. If it was $10,000 I would be clicking my heels right now, it would be a bargain,” he said, adding that it was worth the large financial risk. “I am a concert promoter and when you believe in something, if it doesn’t happen you say, ‘I guess there aren’t as many people like me as I thought there was.’ I did the numbers on Ric sideways and backwards and if I can’t sell 700 tickets to meet Ric Flair there is something wrong with the world. I would be lying if I said the economy was perfect for this because it is pretty much perfect for not doing it. The dollar took a huge dive pretty much the day after I booked him, from par to 75 cents on a dollar so that hurt.”

Within 15 days fans snapped up the VIP package that includes a meet and greet after the show with Flair. The demand was so high that a second pre-show meet and greet has also been arranged, with packages still available.

“The first VIP package included seats in the front two rows. Those seats are worth $55. So in essence you are paying $175 to meet Ric, get an autograph and photograph, and one on one time. You can also bring in one object from your private collection, whether it’s a DVD, his book, a belt, whatever and he will sign that as well.”

While some have complained that the price is fairly high for the VIP, it is becoming more and more common for musical artists to offer “VIP Packages” for up to $1,000, many of which don’t even include meeting the artist.

“I went to the Motley Crue meet and greet last year with the Carnival of Sins tour and they wouldn’t sign a thing and it was a group photo only. It took two and a half hours to get in after paying $250 a ticket, and I have a photo on my wall with 50 other people I had never met before. When I created this VIP package I wanted to have something people could hang on their wall proudly. My Motley Crue one, if I lost it tomorrow morning I wouldn’t even care. It really put a sour taste in my mouth. That is why it was so important to me with the VIP, they are going to walk away from that going, ‘I would do that again and pay more if I had to because I got a once-in-a-lifetime experience.’”

The concept for “An Evening with Ric Flair” is simple. Flair will share stories from his career as well as take questions from the audience. Radomski says Flair has made it clear that nothing is off limits.

“Ric’s team has said this is the first time Ric has ever done this. People want to hear their favorite moments for sure, but they also have the interesting questions they want to ask. He has said that everything is on the table, nothing off limits. He doesn’t want any scripting of the questions whatsoever. There will be two open microphones and all you have to have is the gall to get up in front of 700 people to ask that question. Ric himself doesn’t know what is going to happen, the people are going to dictate the evening and it will be an amazing event.”

So far, the buzz has been very positive, with tickets being sold from around Alberta, British Columbia, Saskatchewan and even Ontario. The support from fans has been incredible.

“The number of people from outside of town has really surprised me and my business partner. We really expected to sell 100% of our tickets from the province of Alberta but it looks like 10-15% is being sold from outside. There are only 15 tickets left in the balcony. The first VIP sold out a month ago, and there are still a few tickets in the second VIP package and regular tickets. It should be about 90% sold out which is very positive. It just goes to show you that a Ric Flair fan knows how special this opportunity is.”

The support from the local wrestling community has been vital as well. Prairie Wrestling Alliance promoter Kurt Sorochan was one of the first on board.

“Kurt and I have known each other for almost a decade but never had the pleasure of working together. When I told Kurt what I was doing he was the first guy to say, ‘What can I do to help you?’ and never asking for a thing. When you bring a band in, the hands fly out for free tickets, and want them at this bar after the show. Kurt was all about, ‘Let’s make this work’ and not even worry about what it costs to him. It has meant the world. Kurt has gone from someone I knew to a friend over the course of this promotion.”

Radomski attended the PWA event recently in Calgary, and was caught by surprise by the fan reaction.

“I took a lot of heat from people saying, ‘How dare you bring him to Edmonton and not Calgary.’ I just started laughing because a second show would have cost twice as much. I had to start somewhere. I wasn’t prepared for the lynching I almost got,” he said, explaining why he chose Edmonton. “I’ve lived in Edmonton for 15 years and know the players in radio and media. To go into Calgary ice cold would have scared me a little bit because of how much Ric is worth. The money was too big to risk in a market I knew nothing about.”

The success of this event could lead to more “An Evening With” presentations with wrestlers.

“I have already been in negotiations with some amazing talent. I don’t really want to tip my hat and tell you exactly who. I would look at athletes with amazing histories with really great work back in the day. I just want to get through this event and let the dust settle and see what my challenges were.”

The recent Highspots.com shoot interview with Flair covered a lot of ground, but left many questions still unanswered. If you watched that DVD and were left wanting to hear more, this is the event for you.

“I don’t know the taping process they did, how much was off the cuff and how much was rehearsed. This will be 100% off the cuff. With Ric no longer having a contract with WWE, I think he may be less politically correct than he would have been a year ago. He is still tied to WWE, and is very appreciative of Vince McMahon so I don’t think he is going to slay Vince, but I think he will be a lot more open. When someone walks up to the mic on Saturday and asks him his real opinion of wrestler X, it will be interesting to see what he comes up with. There is no other show like this in Edmonton. If you miss this I don’t know if or when he will come back.”

Jason Clevett is counting down the days until he meets Ric Flair. Whooo!