He may never have been mentioned in the same breath as all the other great Italian wrestlers of the golden age, but Jumpin’ Rocco Colombo was one of the leading junior heavyweights who could more than hold his own against the very best of that era. 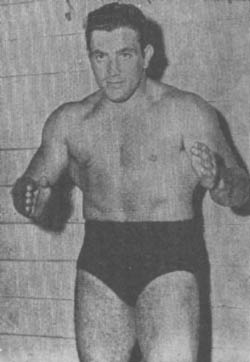 Colombo also worked under the name of Rocky Columbo and was a true star of the mat. But to this very day, a mixture of rumours and innuendos mar what could otherwise have been a brilliant career. Professional wrestlers such as Colombo would have been great candidates for the Global Positioning Systems (GPS) as they stomped across the rings in every nook and cranny of North America, building a reputation that could carry them to the next level of mat notoriety.

He was one of the special breed that was perhaps a little ahead of his time as he combined speed and lightning fast moves with a devil-may-care attitude that endeared him to fans and promoters looking for skilled performers in the post-war period. With his acrobatic ring style, Rocco quickly established a reputation as an entertaining wrestler always willing to mix it up with anyone so disposed.

Described as the “whirling dervish of the wrestling mat,” his reckless use of flying mares and dropkicks often backfired, resulting in more injury to himself than his opponents. For most of the 1950s he was at the top of his game and was considered “a wrestler of the atomic age.”

Yet his career has been largely overlooked by wrestling historians.

John Rocco Colombo was born in 1928 in the Bronx, New York, a hotbed for many promising pugilists, poets and potential candidates for fame. He often wrestled with other servicemen while he was with Transport Command of the Royal Air Force stationed in Bermuda. Like himself, none had any ring experience. He never wrestled as an amateur but after a visit to a New York gym where he met wrestling figures Jess McMahon and Rudy Dusek, he followed his instincts into the mysterious mat world.

After only two weeks of training in a gymnasium, he made his pro debut in Bridgeport and to everyone’s surprise held Boston roughneck Jim Wallis to a draw. It became clear that his path to stardom lay in a wrestling ring. 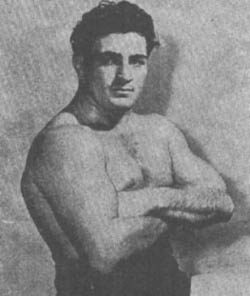 Whether it was at the Eastern Parkway Arena or Ridgewood Grove in Brooklyn, Sunnyside Gardens or Jamaica Arena in Queen’s, the Bronx Winter Gardens, or the St. Nicholas Arena, young Colombo was sure to be on the card. His list of opponents early in his career numbered Lord Carlton, Ovila Asselin, Sammy Berg, George Becker and Donn Lewin.

On one particular card at the fabled Madison Square Garden headlined by Rocca and Stanlee, 16,979 wrestling faithful paid $51,962.81 to watch matches that included Mike Mazurki, Marvin Mercer, and Chief Don Eagle as well as the local Bronx boy, Colombo, who lost to Johnny Barend on the occasion.

Hy Turkin of the New York Daily News penned an unforgettable postscript to his story on the evening’s proceedings to the effect that “No one was hoited.”

Ironically, several years later in Charleston, West Virginia, Colombo made the pages of the local Gazette when he was involved in a legitimate accident. It was reported that he had just scored a victory over Professor Roy Shire and had escaped unmarked. However when Rocco was returning to his dressing room, he fell down a flight of stairs. The misstep cost him an ambulance ride to the hospital where he was treated for a sprained knee and released.

Colombo’s star rose rapidly and at times he was billed as the “Bronx Beast.” He was also known as “Mr. America” when he worked for promoter Jack Pfefer out in the hinterlands. But when he returned to New York City to face wrestling’s real Mr. America, Gene Stanlee, he not only got second billing but came out on the wrong end of the decision. When he came back home he also used Colombo as his surname even though Pfefer and others listed him as Columbo. Rocco later was changed to Rocky. Some promotions simply billed him as the “Great Columbo,” or Jumpin’ Rocco.

But his fighting was not confined to the five boroughs of his home area as Colombo discovered a much wider world for his talents. He traveled extensively to all the great junior heavyweight territories and matched grips with the best of the day. Whatever name he used, he became one of the leading junior heavyweights and promoters usually gave him a push to main event status. He only carried 210 pounds on a muscular 5-foot-8 inch frame. Size may have kept him out of the better paid heavyweight division but it didn’t restrict his career when he worked for leading promoters such as Morris Sigel, Nick Gulas, Leroy McGuirk, Al Haft, and Larry Kasaboski. 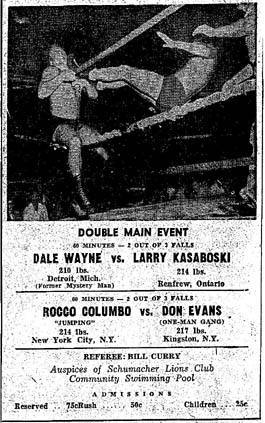 “He was a pretty solid performer as a face in the early TV days. When the game was revived at Madison Square Garden, he was a mid-carder, although cast as a fall guy. He was part of that last big wave of junior heavyweights who eventually were on their way out, also thanks to the popularity of television.”

It was perhaps in Kasaboski’s Northland Wrestling Enterprises that Colombo felt most at home since he returned almost every year over a 12 year period. He was always popular with the fans and particularly the kids. Harry Hart, the son of the famous Flying Dutchman, Frankie Hart, was often brought back into the dressing rooms by his father and met most of the stars on the circuit. The Harts also operated Pine Falls Lodge below Sudbury, Ontario. The resort was a haven for the wrestlers in the territory.

“I remember going into the room one time,” Harry recalled, “and there was Rocco Colombo chinning himself on the door frame, legs extended. He explained that by working on his stomach muscles, it prevented constipation. He was always good to us kids up at the lodge.”

Colombo fit into the landscape quite well, so much so that he married a North Bay girl.

“She was the daughter of Benny Chalk.” Hart said. “Her first name escapes me. But I remember her brother Harry. He was an elite athlete at Scollard Hall.”

No one knows how the marriage fared. The Chalks were Jewish and there was some recollection that the family frowned on the marriage of their daughter to the handsome young Italian wrestler.

But Rocco was accepted by the fans with no questions asked. He quickly became a star for the Kasaboski promotion and is well remembered for his participation in the 1954 Labatt’s Junior Heavyweight Championship tournament. The competition included Dory Funk Sr., Chris Belkas, Roy Shire, Kit Fox, Jim “The Black Panther” Mitchell, Ruffy Silverstein and North Bay natives Herb and Dinty Parks. The ultimate winner was Maurice Vachon before he assumed the Mad Dog persona. 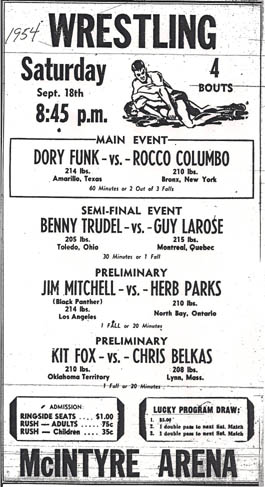 During his sojourn in the north, Colombo ran the gamut of opponents. In keeping with the true northern spirit, he faced the famous wrestling bear, Gorgeous Gus, in an unforgettable match…. but perhaps a match Rocco liked to forget.

The bear was owned by Jerry Graham and Chuck Molnar. According to the Timmins Daily Press, for the first time in his career, the popular Colombo was laughed at and unable to throw his opponent to the canvas at least once. Also for the first time, his conqueror congratulated him by licking him on the cheeks after every move Colombo used ended in failure. After exhausting his extensive bag of tricks to subdue the gorgeous creature, Rocco decided to stand toe to paw with the beast and slug it out to a finish. To no avail however as one mighty sweep of the bear’s paw knocked Colombo to the mat for the count as Gorgeous Gus kept his unbeaten streak in tact.

But if Colombo’s adversaries in the ring were tough, they compared little to the demons he fought in real life. Known only to those in the business, Rocco had a heavy dependency on alcohol and drugs. Little did his legion of fans know that he was on a path of self destruction.

While several contemporaries from his past acknowledged that Rocco had a drinking and drug problem, no one was willing to expand on his problems. But J Michael Kenyon filled in many of the blanks in the Bronx battler’s career.

“I heard many stories, mainly by word of mouth from guys who had worked with him over a half-century ago. He was a longtime drug and alcohol abuser of almost legendary proportions,” Kenyon conceded. “There are remarkable stories from his peers who liked him and thus regretted his decline. It was said he was somewhat able to come out of stone-blotto comas in the morning, travel to wherever that night’s card was and then perform, generally at a decently high level.”

Kenyon further explained that it was unusual for longtime veterans of the mat world to remark about the excesses of their brethren since many of them were living life in the fast lane. The term “legendary” is somewhat overworked at times in the sports genre but the historian remarked that when the foreheads of veterans furrowed at the recollection of some of Colombo’s escapades from decades previous, then “legendary” status is very much in order.

Colombo was still working Kasaboski’s circuit as Rocky Columbo in the early 1960s matching holds with the likes of Paul Vachon, Tarzan Tourville and Rocket Monroe. When the promotion seized for the winter months he headed to the Pacific Northwest for Don Owen. There he was in familiar company for the next several years with top mat men such as Kurt Von Poppenheim, Shag Thomas, Tony Borne, Billy Whitewolf, and Bill Savage. Overall, Colombo’s ring record looks like a who’s who of pro wrestling. 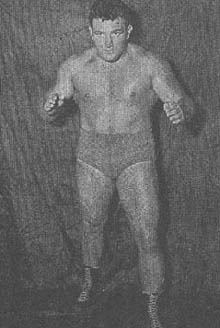 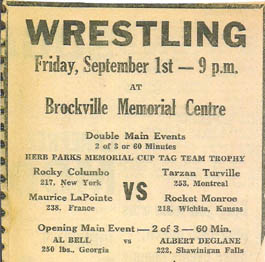 “When I saw him in the early 1960s, he was a distinct low and middle-carder, still with a fairly photogenic physique,” recalled Kenyon. “But you could see the mileage on his face. He was in truth, no great shucks in the ring near the end of his life … as you might suspect.”

Indeed Rocco Colombo was nearing the end. He died in a Spokane, Washington, hotel room on March 6, 1964, as a result of what was believed was a drug overdose. The years of traveling, the wear and tear on his body and his continued substance abuse had taken their toll on the once promising young mat star from the Bronx.

Colombo had represented an era that featured the cream of the crop among heavyweights and junior heavyweights. They were the migrant mat men who followed the cheer of the crowds and sold their labour to the obliging promoters from one end of the country to the other.

Their stories are still being told. Their careers finally recognized for their contribution to the world of professional wrestling.