Trish Stratus made an appearance at the Chapters-Indigo store in downtown Toronto this past Tuesday, signing copies of Inside Fitness magazine and memorabilia for wrestling fans. The seven-time WWE women’s champion chopped it up with SLAM! Wrestling before the event, getting down to business on a number of topics, including a confident prediction of the UFC 94 main event of St. Pierre-Penn.

Her Stratusphereyoga studio still keeps her busy, but for the time being at least, Stratus has come full circle to her fitness model roots. She is the first wrestling personality to appear on Inside Fitness and the magazine’s president and publisher Terry Frendo — whose business relationship and friendship with Stratus goes back at least ten years — explained some of the science behind choosing the picture that made the cut. 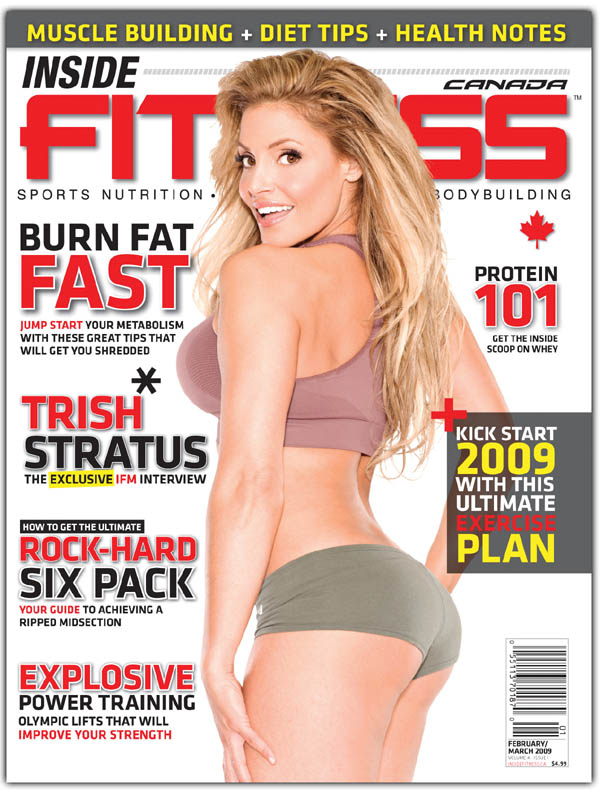 Trish Stratus on the cover of Inside Fitness magazine.

“The cover you see was a fun shot that really kind of caught people’s attention and for us it was a no brainer to use it,” Frendo said. “When we looked through the photos, it was a real winner because it had something that was appealing to everyone. Trish is definitely known for her good looks and we didn’t want to alienate males or females or anyone like that. We wanted to have a nice photo that was attractive to everyone.”

When told there are several Facebook accounts impersonating her image, Trish confirmed that while she does use MySpace, she does not have a Facebook account. “It would be great to clear up that I can be found on MySpace only. I am not on Facebook. That way no one is duped into thinking they are communicating with me when they are not,” she said to make things clear for all.

Her recent tag match on RAW at Toronto’s Air Canada Centre — teaming with John Cena against Beth Phoenix and Santino Marella — is still generating positive chatter from the fans and Trish looked back fondly. “It was awesome to go back, especially with those two things in place. I never had the chance to face Beth and I felt — along with from what I’ve read from the fans — that would be an intriguing match up,” she said contently. “Fans got a chance to see us on-screen together once before — but she was on my side then — so now to face off with the buzz of the Internet, and some smack talk from both of us was a sweet moment!

“Also, teaming with the current champ John Cena is always a good crowd pleaser — actually we have a pretty good track record as a team. I also have become a huge Santino fan. I think he adds so much to any segment he is in, so it was great to have him and add that ‘Je ne sais quoi’ to our segment.

“I made sure to practice the matrix move I did on Santino at least 40 times to make sure I could still do it,” she laughed.

Stratus has been on record against returning full-time to the former federation, save for one-time special events, but it’s hard to imagine the 25th anniversary of wrestling’s biggest stage passing her by. Asked about a possible appearance in Houston at Wrestlemania, she mentioned that she had not been contacted about appearing, but left the impression that something could come together down the line.

Perhaps a matchup with Phoenix or Natalya maybe? She acknowledged the possibilities and in a hint of things to come perhaps, laid down the gauntlet to both.

I would definitely like the chance to finish off what I started with Beth in a one-on-one scenario,” said Stratus. “No tagging out, no Santino shenanigans, just one dominant female against the other. And Nattie I think is going to be a major player soon, given the right chance to do what she does best. Everyone knows how much I respect the Hart lineage, using Bret’s sharpshooter in my retirement match, wearing the pink and black boots in Toronto — which I think Nattie had a problem with — it’s not a coincidence.

“So I would be honoured to face someone who is a part of that legacy and I have no doubt in my mind that we could blow away an audience. Do I want to make her tap? Damn straight I do!” 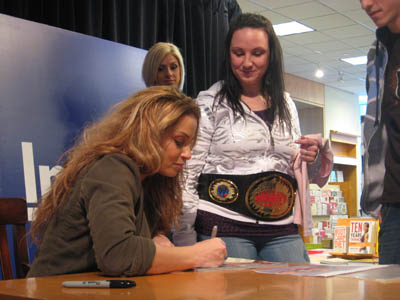 Stratus signs an autograph for a fan. Photo by Kenai Andrews

The conversation finally turned to the upcoming UFC 94 and its main event. Stratus left no doubt she is backing fellow Canuck and UFC welterweight champion Georges St. Pierre against the American challenger BJ Penn.

“Because he rocks,” she said simply.