Bazooka Joe is an indie wrestler who travels around the country to pursue his dream. Like most athletes in his position he is his own brand, he promotes it, markets it, and he has to balance that with his day job. 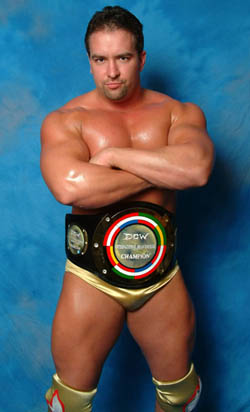 “It’s rough out there. It’s hard to meet any kind of veterans. There aren’t too many veterans out on the road nowadays. It’s hard to learn and get better when everybody is kind of on the same level as you are.”

He might be the best “hi-technical” wrestler on the planet based on what he can do on the keyboard and in the ring.

He now works for a different company and he wishes to keep that name out of print. But he has guys that will cover for him when he is out on the road.

At 6-1, 250 pounds he is clearly not a high-flyer. He boasts such signature moves as the Bazooka Bomb, Bazooka Buster, and the Bazooka Launcher. His finishing move is the O3.

“The O3 actually means ozone. It’s a torture rack into a neckbreaker. So I say when an opponent actually steps in the ring he actually enters the Joe-zone layer,” he said. “I’m not sure if anybody kind of gets it but I think it’s kind of witty.”

His career started taking off after he took some training with a legend of the squared circle.

“In 2007 I attended the Harley Race school out in Missouri. It was an honor to meet him and he gave us a lot of insight on the business. It was a great experience and I was able to learn a little bit of different style, a Japanese style.”

Joe also regularly heads to the Monster Factory in Bellmawr, New Jersey, once a week for additional training.

“We think he has plenty of potential. He is still relatively new to the biz so he can use some more experience,” said Ed Atlas, from the Monster Factory. “But overall the sky’s the limit as long as he works hard and keeps on wrestling, there should be no ceiling on where he ends up.

“If his brains turn out to be as big as his arms he is in for a helluva career,” Atlas added.

A Florida trip yielded more lessons. “Recently I went down to Tampa, Florida for the WWE tryout/developmental camp and that was an unbelievable experience. Guys like Steve Kern, Billy Kidman, and Norman Smiley, Tom Prichard, all those guys train you down there,” Joe said with excitement in his voice. “I learned more in that week than six or seven months on the indie circuit.”

Joe’s been a champion for various independent federations but he wants to make it to the big time and not too long ago he attended a taping of Raw in Philadelphia in hopes of making it on the card, even if was a dark match.

“I used to go to the Spectrum and Wachovia Center to watch matches so that was kind of cool to be on the scene and on the payday for the WWE for a day. If you are not a contracted guy with the WWE you are brought in as ‘extra talent’ to have any role like a dark match or for security,” Joe stated.

“Mainly this is for a dark match or they put you up against Kane and you get killed.”

Joe didn’t get in that night but he got a nice view for the Slammys presentations.