By CHRIS AND BRYAN SOKOL

Throughout his career, “The Nature Boy” Ric Flair lived the high life and partied will the best of them, but behind all the glitz and glamour is a very intriguing story. That story is told in the Highspots shoot interview, Diamonds are Forever, an in-depth and light-hearted look at the life and times of Ric Flair.

The four-disc version of the shoot interview, which covers Flair’s career in exceptional detail, clocks in at over 13 hours and is probably one of the most complete shoots on the market today. Flair appears open and honest throughout the course of the interview and seems genuinely excited to elaborate on certain parts of his career.

As the first disc begins, mention is made of Ric Flair’s black eye, which stemmed from a fight that Flair had been in with his daughter Ashley’s boyfriend. According the Associated Press, the police that responded to the domestic disturbance call said that Flair had a “no problems here” attitude and just wanted the incident forgotten. When the interviewer brought it up, Flair said that he wouldn’t comment, in order to “protect the innocent.” 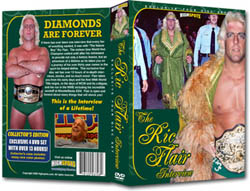 The shoot itself certainly compliments Flair’s autobiography, which the interviewer references to on several occasions. Highspots should be commended for the research they did in preparation for the interview, as the interviewer appeared knowledgeable and was able to expand on questions and coax better answers out of Flair.

Flair spent an entire segment of the shoot speaking about the infamous plane crash of 1975 and how he was nervous about bumping afterward. Flair showed great compassion for those involved with the accident and said he held no grudge with the pilot and feels as though the crash only took away some of his time, but also enhanced his legacy.

Flair talked about his run-ins with Ricky Steamboat, Harley Race and Wahoo McDaniel, dedicating a segment to each of them and going over the ideology behind the booking of each feud, which was interesting in its own right. Flair offered his opinions as to why each feud worked and what he liked about each opponent inside and outside the ring.

Each of Flair’s title reigns is discussed at one point or another during the shoot, as well as the challengers he faced during each reign. Flair also discussed his personal life and friendships within the business, citing Shawn Michaels and Triple H as two of his closest friends.

If you’re looking for serious dirt or scandalous comments, this shoot doesn’t deliver along those lines. Flair is wise and doesn’t offer up any serious derogatory comments. For the most part, he remained mellow and recounted his career, without incriminating anyone or calling anyone out.

For example, Flair consistently put over Triple H and Shawn Michaels for being “old school.” He touted Kurt Angle and Jack Brisco as being amongst the best crossover wrestlers from amateur to pro and put over Harley Race as being a man who would do what’s best for the company he worked for, no matter what the situation. That of course was in reference to Race’s dropping of the belt to Flair at Starrcade ‘83.

Flair did release some anger in the shoot specifically when speaking of Jim Herd and WCW. Flair said of WCW, “I was so happy to see that cluster**** come to an end.” Other than a few shots here and there on the management of the company, Flair was pretty careful in terms of what he expressed.

Another bright note about the Four-Disc Special Collector’s Edition is the packaging and exclusive photos that come with it. Highspots went above and beyond expectations to make this DVD stand out in a class of it’s own. In addition, the pictures and footage shown throughout the interview adds to the production quality and puts this DVD over the top. A three-DVD set is also available.

Final Verdict: Buy it! Spend the extra money and get the four-disc set, it’s well worth it. The shoot may not be jaw-dropping and aggression-fueled, but it’s an enjoyable, well-produced look at a true icon, Ric Flair.

Chris and Bryan Sokol are two brothers from Long Island, neither of whom were born when Flair first won his NWA World title; therefore this video was a great education on many levels.

Chris and Bryan Sokol are from Long Island, NY and enjoy tag team reporting for SLAM!