Reid Flair about to strut into the spotlight

The eyes of the wrestling world will be focused on Charlotte, North Carolina, this weekend. Saturday, December 6th will mark the debut of Reid Flair, the youngest son of “Nature Boy” Ric Flair. Reid will team with older brother David against The Nasty Boys and manager Jimmy “The Mouth of the South” Hart.

Everything takes place at the Vance High School in Charlotte. The icing on the cake for the fans is an appearance and signing by Ric Flair, who will also manage his sons during the match and Hulk Hogan, who will be the guest special referee in what should be an exciting evening of wrestling. 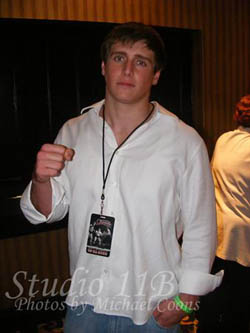 Reid Flair at a fan fest in August 2008. Photo by Michael Coons

In addition, both the Rock ‘n’ Roll Express (Ricky Morton and Robert Gibson) and the Midnight Express (“Sweet” Stan Lane and “Beautiful” Bobby Eaton version) will re-unite and clash for the first time in approximately 20 years.

There are no plans to record the event, according to Bochicchio.

“I approached Ric and said, ‘Why don’t we make this Reid’s first match in Charlotte? It would be a good experience for him to have you on the show.’ Ric said, ‘That’s a great idea,'” explained Bochicchio. “Originally Reid was going to wrestle one of his trainers, George South, in a very simple match. Ric has turned this into a much bigger show now.”

The 6-foot-3, 215-pound Reid, who has been training for approximately four months, is well aware of the expectations of his last name.

“I feel fortunate that my father is taking time out of his busy schedule to do something like this for me,” he said during a break from training at the Harley Race Wrestling Academy in Eldon, Missouri. “I feel like it is going to be the start of hopefully a great career. I’m feeling pretty positive about it; a little nervous at the same time. But if you’re not nervous, you probably shouldn’t be there.”

Any memorable nuggets of advice? “Take in everything that you learn and the best thing is to put it together how it works best for you. Listen to everybody, get a different opinion about everything and just keep your head up and work hard. I think that’s the best thing you can do.” 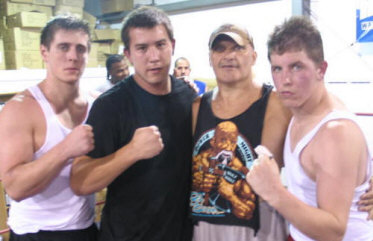 A WWE developmental deal is apparently on the table for the 20-year-old, but he emphasized his preference not to rush things. “I think it is (on the table). I’d like to get a chance to get a better view of the business first and see how things work and learn to appreciate it, instead of just getting down to Florida just because of who I was. I want to kind of work through things, do it like how everyone else does it. I know some things will be different because of my last name but I didn’t want go down to Florida without any knowledge of wrestling or basically be down there because of who I was.”

Reid recently added supplementary training at Race’s Academy to his regimen and the former eight-time NWA champion shared some insights on the youngster’s progress.

“It’s like a lot of guys, you know like the Hennings (with current prospects grandson Joe and granddaughter Amy),” Race reflected. “When you’re around as someone as popular and as high up the ladder as they have been and especially Ric Flair, because there hasn’t been anybody higher than him … Once you can get them to realize that they’re not their father and they don’t have to prove themselves like they think they do, then they start catching on real well.

“Each night is a three-hour training session, and I have 15 kids. Once they get done with their calisthenics — which is every night — then we get into the matches with them according to their development. [Reid] had a lot more (training) than probably anyone else that’s been in the business the length of time he has because of all the matches that he has here three nights a week.”

Hart mentioned that he is looking forward to Reid’s debut as well as reuniting with the Nasty Boys and revealed a tidbit about the Hulkster’s last-minute involvement. “What I want people to know is that Hogan is doing this for free as a favor to Ric,” he said. “Ric asked him to come down and he is doing exactly that. You know, in this business if you ask a favor of someone, a lot of times it doesn’t get returned, but whatever opinion people may have of Hulk Hogan, he helps his friends out.”

“Ric Flair approached Hogan and wanted him to be part of this to make it a big show for his kid,” Bochicchio elaborated. “Hogan is good friends with the Nasty Boys and stuff so, it’s just one of those things where he’s doing it out of love for wrestling, not so much because someone wants him to be there. He’s not going to do autographs, he’s not going to do pictures. He’s coming in strictly to be part of Reid’s match and probably in all honesty as a favor to Ric.” 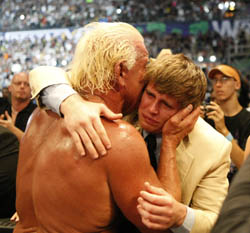 Equally as interesting is how Sweet Stan was coaxed back into the ring. “Stan has been doing commentary work for speedboat racing,” Bochicchio clarified. “We have a show the night before, December 5, in Greensboro and that’s where Stan lives. I think he was interested because this show was near his house and he hadn’t been in the ring in awhile. So he was pretty excited about that, and that match was going to be the original big draw.”

Asked if the Nature Boy’s appearance would create any tensions with Vince McMahon, Bochicchio replied it would not as the two parted ways on good terms and have a mutual respect for each other. “Ric and Vince have a very good relationship even to this day. They left on the best of terms,” he said. “Ric holds him in the highest regards. I’ve never heard Ric say a negative word about Vince McMahon. In the (Highspots Ric Flair Shoot Interview DVD) interview that we did, Ric revealed he was not ready to retire; it was Vince McMahon that asked him to do the retirement. Ric did it for him, but his head is still into wrestling.

“I know TNA has made offers for Ric and all that stuff, but he won’t go to these other companies, 100% out of loyalty to Vince McMahon. Ric’s been doing this autograph tour for a while since he and the WWE parted ways. I don’t think it’s too abnormal, so I would not expect to hear anything from Vince.”

So now the stage appears set for young Reid to walk — perhaps even strut — down the aisle alongside his brother and father Saturday night.

A portion of the proceeds are being donated to Vance High School, where the card is being held.

REID FLAIR’S DEBUT
Here are the results from the show, promoted by Highspots.com, on Saturday, December 6, 2008 at Vance High School in Charlotte, NC: