Though he wasn’t a big enough star to be remembered by most wrestling fans, those who did know Charles Buffong, who died of a heart attack in Calgary on November 27, 2008, just hours after the funeral of his 22-year-old son Jerimy, will never forget him.

Buffong started his career for Georgia Championship Wrestling in the 1970s and was quickly noticed by Stu Hart, who signed Buffong to come work for Stampede Wrestling in 1981. At the time, Buffong competed under the name Otis Taylor. When Stampede started promoting shows in Antigua, where Buffong is from, they allowed him to compete under his real name. Stu’s son Ross remembers Buffong quite well.

“He was a likeable fellow,” Ross said. “He wasn’t the most talented wrestler, but he had great physique and was able to maintain his physique for the rest of his career.”

Ross added that whenever Stampede had shows in Antigua, they were always welcomed with open arms.

“Charles was very appealing to the fans over there,” Ross said. “We were very well received and the people loved Charles.”

Ross was also impressed with Buffong’s actions out of the ring. He said Buffong represented Antigua very well and being a man of colour, he had more than his fair share of backstage brawls and was always up to the challenge.

“Charles was very good at handling himself out of the ring and I could see that he knew how to throw a punch,” Ross said. “I respected him for that.”

Ross remembers Buffong best as part of a tag team with Gerry Morrow. He says anytime a pro wrestler passes away, it takes an emotional toll on the entire business.

“It’s sad to hear about his passing,” Ross said. “I liked him personally and I would rank him as moderately successful.”

Ross said his older brother Smith would have known Buffong best, as they were very close friends. 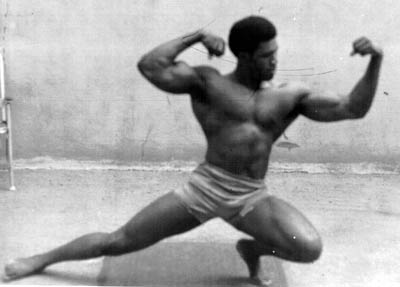 Smith was shocked when he heard the news that Buffong had passed away. He agrees with his brother that Buffong’s best attribute was his physique and that he opened the door for Stampede to promote shows in Antigua.

“Charles had the best life in Antigua,” Smith said from his home in Puerto Rico. “We sold out stadiums every time we went down there.”

Smith says Buffong was a pretty good boxer, before he started wrestling. He mentioned all the times Buffong had to deal with backstage politics and fights, but said he also chose his battles wisely.

“Charles didn’t back down from anybody,” Smith said. “There were times when he could have easily torn somebody apart, but he just let it go, because he was a real good guy.”

Smith said he tried to move Buffong’s career in the right direction and get him the right kind of exposure.

“I did what I could to help him get some TV exposure, but there was a lot of racism back then and even my brother Bruce was kind of rough on Charles,” he said.

Smith also recalls the dedication Buffong had, when applying for Canadian citizenship.

“Charles worked very hard for his citizenship and when he finally got it, he didn’t want to leave Canada,” Smith said. “I believe that he enjoyed his stay with Stampede. It was like his second home.”

Smith knew Buffong better than the rest of the Hart family. They were the best of friends and he is deeply saddened by Buffong’s passing. In fact, he was surprised to discover that Buffong, 64 when he died, was older than him, because he still looked so young.

“That’s really damn bad that Charles is gone,” Smith said. “I just turned 60 recently and I thought Charles was younger than me, because he always looked so damn great.”

Perhaps nobody knew Buffong better than his ex-wife Lori Froese, who wrestled as Tiger Lady. Froese still cherishes the memory of the day she and Buffong met.

“I was a wrestling groupie at the time,” Froese said. “The first thing I noticed about Charles was his size. He just had this way about him and he was very charismatic.”

Froese says Buffong was a very passionate man. She says he loved his family just as much, if not, more than he loved the wrestling business.

“People had a lot of respect for Charles,” Froese said. “He was very wise and he would always try to help everybody.”

Froese says he was a big man, with an even bigger heart. She misses him dearly and will always remember the times she spent with him.

“Charles was a hero to everybody and he always gave good advice,” Froese said. 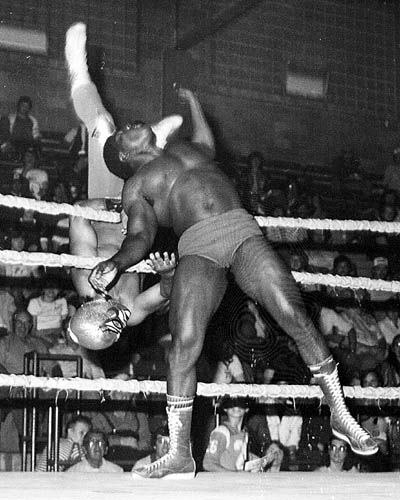 Buffong’s oldest son Charles Buffong Jr. remembers when his uncle took him to the stadium in Antigua to watch his dad wrestle. Junior was 13 years old at the time and it was the first time he ever got to see what his father did for a living. He says he’ll never forget it.

“As soon as I saw him coming to the ring, I went nuts,” Junior said. “I couldn’t believe what I was seeing. I thought they put on a good show. It was great entertainment.”

Junior, now 38, remembers his father as a hard worker, who was very determined and loved his family.

“I lived with my dad for about two years,” Junior said. “Every family has good times and bad times, but he taught me to do what I had to do and take care of myself.”

Junior added that Buffong was his mentor. He says that his father was a good man and he always did what needed to be done.

“The time I spent with him was great,” Junior said. “I used to watch him work out and he inspired me to get bigger.”

The people that knew him believe that Charles Buffong left this world long before his time. He was a loving father, a caring husband, a close friend and an all around good man. He is survived by his ex-wife Lori, his son Charles Buffong Jr. and his daughters Jade and Kathy Buffong. He was predeceased on November 15, 2008, by his 22-year-old son Jerimy James Buffong.