After watching the Highspots shoot interview with Terri Runnels, it is obvious Runnels has many assets other than just her implants. She comes across as smart and professional with her main preoccupation being her daughter. Runnels chooses her words carefully when talking about other people in the wrestling industry and does not offer up many shocking revelations. 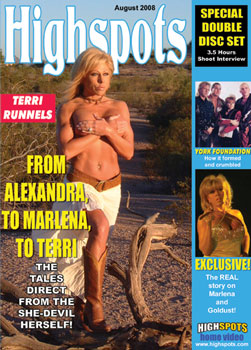 Runnels starts the shoot interview detailing her life growing up in Florida. The interview quickly moves on to her career as a make-up artist with CNN. Runnels maintains she was rarely starstruck but does admit to an infatuation with Tom Selleck and Eric Estrada. She does not have kind words for CNN host Larry King. Runnels alleges that King tried to hit on her with the question, “Terri, I’m feeling tired. Not just tired, sexy tired. Do you know what I mean by sexy tired?” After Runnels brushed aside his advances, she alleges she did not work on The Larry King Show again.

For wrestling fans, these may be trivial details. Runnels does explain how she got her start working with WCW and eventually becoming Alexandra York. While Runnels worked as a make-up artist for CNN she also did make-up for Jim Crockett Promotions on the weekends. Runnels did make-up for wrestlers like Sting, the Road Warriors and on-air talent, Tony Schiavone.

When Ted Turner bought WCW in 1988, booker Ole Anderson invited Runnels to be a part of the WCW roster as a manager. The character of Alexandra York was developed over a lunch meeting with Tony Schiavone. Runnels credits a number of people for introducing her to the wrestling game but particularly credits Terry Funk. She cites enjoying working with Terry Taylor, Ric Flair and Sting. She does not offer up any tabloid details about her dating relationship with Brian Pillman.

Runnels the diplomat is evident when discussing her relationship with Dustin Runnels and his famous father, Dusty Rhodes. Terri Runnels states that she has always preferred “manly men” and Dustin Runnels fit the bill. Her and Dustin were married in 1993 and had their daughter, Dakota, in 1994. Terri Runnels speaks both with admiration and disdain for Dusty Rhodes. She cites him as being an incredible performer and a great grandfather. She also lays blame on Dusty for spreading rumours that she was cheating on Dustin and was just after his money. Terri also says Dusty was the reason why she left WCW. She does give Dusty credit for having grown over the years and becoming a better father and grandfather but there does seem to be a lingering animosity between the two.

Runnels opens up about her years in the WWE as Marlena and her time with Dustin Runnels character Goldust. The character of Marlena was inspired by Marlena Dietrich. The cigar-smoking came from the fact Runnels enjoyed smoking cigars in real life. Runnels gives credit to Dustin for making the Goldust gimmick work and also feels Vince Russo did a masterful job of writing many double entendres for the Marlena character. She also reveals that Scott Hall initially had a reluctance to wrestle Goldust.

In many ways, the WWE attitude era defined Runnels as a WWE diva. She seems to have mixed emotions when describing her time with the WWE during this period. Runnels admits to never being a great wrestler. She feels she tried her hardest and would take whatever bumps were given to her but did not enjoy the wrestling aspect. She also did not enjoy doing female on female matches and confesses to enjoying managing much more than wrestling.

Runnels speaks mostly in positive when describing her fellow female wrestlers. She particularly singles out Trish Stratus as someone who greatly improved as a wrestler and performer.

Runnels saves her anger for people who have doctored photos of her on the Internet making it seem like she posed naked. Runnels emphasizes the point she has never posed naked for publications like Playboy and never will. She points out that in the doctored photos “the carpet does not match my carpet.” She also has a lot of hatred for people that pose as her on the Internet.

Overall, the shoot interview exposed Runnels in a very positive light. She did have a tendency to ramble at certain points and used the expression “here I go again chasing rabbits” as a segue to apologize for a long story. She does not offer up an extreme amount of dirt about her fellow wrestlers on the industry. Instead, it is more an overview of her career and personal life. Runnels comes off as an active mother who is trying to transition to a new phase in her life.

There are a few bonus features where Runnels manages for Jerry “The King” Lawler at some out-of-the-way promotion.

The DVD is well worth viewing for any Runnels fans but do not expect to get a great deal of titillation for your 20 dollars.