Terri still having a blast

MONTREAL – After being in the WWF for many years, Terri Runnels still gets as much pleasure coming to work as she did when she first started.

But it’s at the house shows where she really lets herself go and try new things. In a recent interview with SlamWrestling.net in Montreal, Runnels said she really enjoys house shows as she can be more creative with her character, relax with the crowd and even attempt tricks with them that she normally would not. 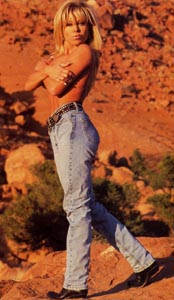 “On TV tapings or pay-per-view, you must keep your body and face towards the camera, you have to be careful,” Runnels said. “But on house shows, you can actually talk to your partners without the fear of getting picked up by the camera”

The WWF creative team actually encourages this attitude as the occasional new storyline is developed from these “try-outs” at house shows. With the cameras off, everyone gets more liberties.

But, ultimately, all storylines always make their way to the top, and by read Vince McMahon. Runnels has great respect for her boss. “Vince is the Master scriptor, he’s the master everything, then there’s everyone else.”

Runnels said that she has never refused to do any storylines since her debut with the WWF, although there were a few angles she’d rather forget – none more than the now-defunct, “Moppy” story with Perry Saturn and Raven. At least she hopes it is over. “You would think that once I’ve killed Moppy, the angle would be over, and I really hope it is.”

Her utmost trust with McMahon’s “vision” of storylines is the reason she never refused to try new storylines. Mind you, in today’s WWF, storylines are sometimes decided an hour before any given show, contrary to when she first came aboard, when she would know the direction of any story about six months ahead. But Runnels appreciates the fact that there is one person to take the final decision, because it makes for a better working atmosphere and an organized environment. That trust in McMahon’s vision has been rewarded many times over, and that’s the reason she puts so much trust into his timely decisions.

But there is one angle that’s still very close to her heart, and with a biased smile, Runnels said that the Goldust angle was her all-time favourite. Although she recently re-married, Runnels still has a very amicable relationship with her former husband and storyline partner, Dustin Rhodes, with whom she speaks at least twice a day, often about things other than their daughter Dakota.

“We still have a great relationship, he’ll call me twice a day, just to say hello, or ask me how to cook this or that,” she said. “As a matter a fact, I’m presently lobbying to get him back in the WWF as Goldust as I think he could still get lots of reactions with that crowd.”

She believes that the angle would be an instant hit again and the fans would just love to see that gold dust falling from the ceiling. Dustin is also very open to the thought of coming back and apparently has the support from many of her co-workers, Runnels said.

When asked where she sees herself in 10 years, Runnels candidly answered that she just wants to be the best wife to her new husband that she can be, and continue having that great mother/buddy relationship with her daughter Dakota. “I just want to be a good mommy and wife.”

Runnels then wondered aloud whether she would still be in the wrestling business in 10 years from now. Having given it some thought, she nods a goodbye, and raises two fingers behind her head in a ‘V’ as she leaves for another interview. Trying out new gimmicks with the press seems to work too.