Among the many wrestlers who crisscrossed North America after World War II on their way to fame and fortune, North Bay’s Bill Curry remains one of the game’s truly unsung heroes. 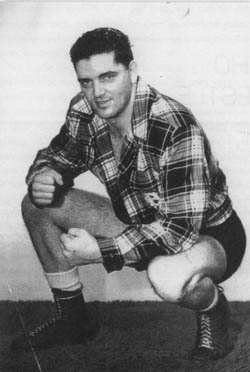 After years on the road, Curry chose to put family first as he ended his career in the early 1960s to remain in his home town in Northern Ontario to raise his family. If winning a championship belt requires sacrifice and dedication, Curry could just as easily take pride in the fact that providing for a young family requires an equally Herculean effort. Today, he reflects back on a life that has been truly rewarding both in and outside the ring.

Born in Windsor, ON, in 1929, he also has deep roots in the Ottawa Valley where he resided with his parents at an early age in Deux Rivieres, a small bush town between North Bay and Pembroke. While there as an adolescent, he worked in the lumber camps and on the river drives.

But he was drawn back to North Bay where he resided as an infant. It was there that Curry not only flirted with the idea of following a career in boxing but actually developed into a promising light-heavyweight prospect on the Canadian scene in the late 1940s. While he was developing his boxing skills, he fell in with the wrestling crowd on Lakeshore Drive where veteran wrestler Herb Parks operated a tourist camp.

Promoter Larry Kasaboski was just getting Northland Wrestling Enterprises off the ground and he and his veteran wrestlers were always on the lookout for new talent. It was the beginning of the 1950s and the game was quickly drawing a loyal following in Eastern Ontario towns such as Renfrew, Smiths Falls and Pembroke and in the rugged northern mining towns of Sudbury and Timmins.

Curry formed a strong bond with Parks and under his tutelage, the tall, skinny boxer was gradually transformed into a wrestler after becoming discouraged with the boxing profession.

“In boxing, everyone wanted a piece of you,” Curry recalled, “or at least a piece of your earnings. Too many people would tell you how good you were or tell you anything you wanted to hear just to keep you going and get their share of your purse.” 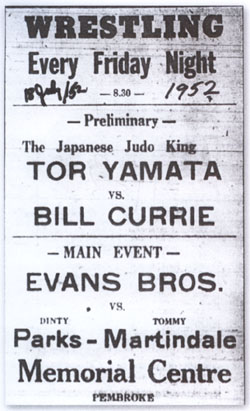 But working out with Parks and hanging around with wrestlers, he developed a respect for what these athletes were trying to achieve. Herb Parks was a sound technical wrestler and one of the most respected men in the game. He was also grooming his younger brother Dinty for a mat career but found time to spend with the tall, gangling Curry who grew a strong attachment to the older man, regarding him as a mentor and father figure. Under Herb’s watchful eye, the young boxer was slowly transformed into an accomplished wrestler.

“Herb and I would go at it pretty seriously in the ring, and I usually found myself on the short end when we finished,” Curry said. “I was always amazed at the way he could handle me with ease even at his age. I found myself on my backside more often than not. Herb always said I had the toughness and determination to make it and confided in others that he wished his brother Dinty would go at it the same way I did.”

Bill “Dinty” Parks, tall, tanned and muscular developed a large fan following wherever he appeared and became a star in his own right across North America.

Curry’s transition from boxer to wrestler did not happen overnight as he paid his dues. In his early twenties, the young wrestler served his apprenticeship in a promotion that boasted stars such as Dr. Jerry Graham, Chris Belkas, Rocco Colombo, Louis Papineau (Gino Nicolini) and Dave Sims not to mention the Parks Brothers and Kasaboski himself.

As a carpenter or jobber, Curry often found himself absorbing punishment from the likes of Roy Shire, Don and Whitey (Whittler) Evans, Tor Yamata, Jack O’Reilly, Maurice Vachon and Wild Bill Zim. He gained a healthy respect for veterans such as Leo “The Lion” Wallick and rugged Rebel Bob Russell as he acquired much needed and valuable ring experience. His first match was against the ring savvy Wallick and the outcome was not in his favour, as was expected. 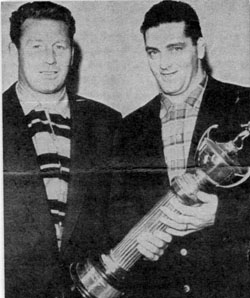 But Curry persevered and became one of Kasaboski’s regular foot soldiers, dependable and loyal. He was well liked by the wrestling fraternity and in the early days spent as much time driving a carload of wrestlers or getting a feel for the ring as a referee, often taking his bumps in the process. He started getting some fan recognition when teaming with Papineau or Kasaboski and Dinty Parks.

When Northlands rolled up the mat each fall, the practice was for everyone to head for other promotions in the U.S. and Canada and Curry was no exception. While working in a lumber camp in Latchford, ON, he met his future wife Anita and the two would share Bill’s early career on the road. Like many other wrestlers it wasn’t long before the Currys became familiar with what could be characterized as “rasslin’s revolving door” traveling from territory to territory, sometimes only staying for as long as it took for your laundry to dry.

For starters, Curry worked for Cliff Maupin in Toledo, Ohio, where he established his credentials by answering a challenge from the local Navy amateur champion. Bill pinned the sailor in 30 seconds and never looked back After a stint with Al Haft in Columbus, Ohio, and Bert Ruby in Detroit, his travels eventually took him out to Portland, Ore., where he worked for Don and Elton Owens. The Currys lived in close proximity to their friend Louis Papineau and his young family. Luigi Macera was another close friend.

There were many ups and downs on the road for the next decade but Curry has some fond memories of the good times. On one occasion he was heading out to Spokane, Wash., to work for Tex Hager when he decided to stop over night in Missoula, Mont. 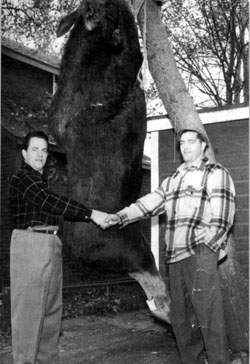 “There was a match at the arena that night so I decided to wander over to see what was happening,” Curry reminisced. “When I got to the arena I bumped into Hager who recognized me from my advance photos. He told me they were a man short and if I had my toolbox I could fill in as a replacement. Primo Carnera was headlining the card that night and there was a big crowd in attendance. Luckily I had my gear with me and they put me on the card.”

At the end of the night Curry was paid off in an unique way.

“Tex paid me with 710 silver dollars,” Curry laughed. “I put them all in my toolbox. At the hotel, Anita and I spread them out on the bed. We had never seen that much money before.”

But not all promoters possessed Hager’s largesse. Nick Gulas in Tennessee had a reputation for poor payoffs and Curry’s experience in that territory was less than satisfactory.

“First he shortchanged Dinty Parks and me when we were operating as a Canadian tag team, never giving us a payoff that we thought reflected the size of the crowd. If you were not in good favour, they sent you on some long-ass hauls to little towns for low paying jobs, hoping you would become fed up and leave.”

The fact was that while some promoters played fair, others had a hand on your wallet. But regardless of the reception he received in some territories, Bill established a solid reputation in the game. He became known as Herb Parks’ protégé and his reputation usually preceded him.

But each year, he returned to North Bay to work for Kasaboski in Northland Wrestling Enterprises. He became a fixture on the circuit and a close friend and ally to the veteran promoter. Curry identified easily with the fan base in the Ottawa Valley and Northern Ontario. A plain, plaid jacket became his trademark ring attire as the farmers and miners and blue collar workers endorsed his work ethic and sense of fair play.

It was left to Maurice Vachon, Tony Morelli, Len Rossi and Dinty Parks to wear the coveted Labatts’ North American Jr. Heavyweight Championship belt. Curry gradually assumed the unofficial role in the territory as policeman, a role previously filled by his mentor Herb Parks, after the veteran wrestler died in a hunting accident on Lake Nipissing. He also started booking for the promotion.

“Each promotion had a policeman,” Curry explained. “It was usually a veteran who took care of troublemakers and subtly resolved problems among the rest of the guys. Herb had always filled that role. I just fell into it when he was no longer around.”

His stature in the ring also rose and soon he was facing the likes of Tony Borne, Reggie Siki and Wild Bill Savage. When heavyweights such as Pat Flanagan, Tiger Tasker and Mike Valentino (Baron Sicluna) from the Frank Tunney promotion in Toronto came up north, it was Curry who answered the bell as their opponent.

“Toughest big guy I ever faced was Fred Atkins,” he reflected. “The toughest little guy was Herb Parks. And George Gordienko out in Calgary was probably the toughest of all.” 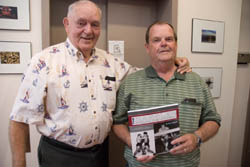 Bill Curry and author Gary Howard at a book signing at the North Bay Museum.

While Bill and Anita Curry followed the carefree wrestling lifestyle, they also started a family and soon the Currys had three children. It was then time for some serious soul searching. At the outset, both had agreed that when the children became school age, Bill would come off the road and the children would receive a proper education.

By the early 1960s the game plan was put into action and Bill wound up his career. A match in Smiths Falls against Cowboy Len Hughes and a grudge match against a young upstart named Ronnie Garvin were Bill’s swan song matches.

The Garvin match was orchestrated among Terry and Ronnie Garvin and Kasaboski and Curry to raise money for the West Ferris Minor Hockey Association of which Bill was one of the founders.

Although wrestling fans in other areas often confused Bill Curry with the more rambunctious Wild Bull Curry, they were not related. But Bill never had an identity problem in North Bay even when the promo ads spelled his name Currie instead of Curry. After retiring from the ring he eased into a position with an insurance company. Later he took a job as a car salesman, quickly rose to sales manager and finally bought the business. All the while he was coaching minor hockey and teaching wrestling at Scollard Hall in North Bay.

Just as he carefully crafted a ring career with Anita by his side, the pair also was successful in their family life. Today, their son Bill Jr. is employed in a senior management position with General Motors in Saginaw, Mich., while daughters Veronica and Kathaleen are nurses. Grandchildren are much in evidence as the Currys split their time between North Bay and Florida enjoying the fruits of their labour.

Curry is still remembered and respected in the city that has become known as the Gateway of the North. Along with Herb and Dinty Parks, he has been inducted into the North Bay Sports Hall of Fame. The sporting fraternity has a special place in their hearts for one of the last warriors of wrestling’s glory days.

He may never have worn the belt but as he traveled across the heartland of Ontario, he was always everyone’s choice as one of the truly good guys from the northland.