Maria Garcia was a female wrestler during the 1960s, having trained under the Fabulous Moolah. She came from a poor household with 12 children but would later have a family of over 30, when she became a foster parent after retiring from the ring. She died October 29 from circulation disorder. She was 66.

Born Margarita Gaitan on February 4, 1942, she grew up on an 85-acre farm in Central Texas. She was the sixth child of Maria and Procoro Gaitan and took the American name of Margarita early in her life. She was the first to graduate in her family and would help make ends meet for the family by picking cotton and corn. She knew didn’t want to be a farmer. 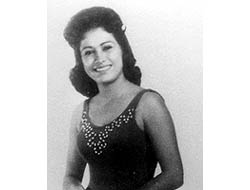 She helped her mother raise the younger children and took pride as if they were her own children. Her love for raising children would catch up to her later in life.

She gained a love of wrestling by her father, who served for the U.S. Air Force. He loved sports, particularly wrestling. She knew from when she was young that she wanted to give wrestling a shot later in life.

“The next day the girls drove stakes into the ground in a sun-parched Texas cow pasture, stretched barn ropes around the four stakes and started their training in a makeshift ring,” she told Big Time Wrestling in a January 1964 article. “Every Wednesday they attended the San Antonio wrestling arena, then next day drilled in the field on holds they had witnessed the night before.”

Following her high school graduation she wrote wrestler Buddy Lee, proclaiming her passion to become a wrestler. Lee referred her to his wife, Mary Lillian Ellson. Ellison, who was better known as the Fabulous Moolah, had a female wrestling school in Columbia, S.C. Garcia got part of the money for a bus to Columbia from an older sister who knew Maria’s passion.

Moolah controlled most of the women wrestlers well in the 1980s. So when a promoter was seeking a female bout, Moolah was called. Moolah would often defend the women’s world title with opponents of her picking. Moolah would also send her trainees to shows all across the country.

After two months of training, Gaitan made her debut as Maria Garcia on December 6, 1962, defeating Olga Martinez in Lynchburg, Va.

While most wrestlers drove, Garcia took the bus. She liked the time to herself and found it more peaceful than driving or riding with other wrestlers.

“I enjoyed being able to sleep or look out the window when I wanted to,” Garcia said in a 2004 interview. “You couldn’t do that when traveling in a packed car. This gave me a chance to unwind and meet new people.”

Early in her career, having Spanish heritage, she was nicknamed ‘The Mexican Spitfire’ by Moolah. Her Latin beauty was easy on the eyes. A natural babyface, she was little in size at only 5’3”, but with 11 siblings, knew how to handle herself.

“She’s just a darling woman,” said Cauliflower Alley Club president Red Bastien in 1984, “but I can assure you Margaret was not a woman you would want to mess with during her wrestling days. She really was a Spitfire!”

She would later tell people that she worked most of Canada and all of the continental United States but Florida. “I worked with Moolah, Rita Cortez and Tony Santos, to name a few – they all ran their own circuits.”

Judy Grable was her favorite partner. “She was so smooth in the ring.” She noted her toughest opponent was her teacher, Moolah. “When I was done wrestling Moolah, I was absolutely exhausted… and I was in good shape!”

In the summer of 1964, she took time off from the ring to follow in her father’s footsteps when she joined the U.S. Air Force. She would often return to the ring after her call of duty was over but never full-time. She decided she wanted to raise a family and could not do so if she was wrestling.

“The pay wasn’t any good,” her widower John Strong told the American Statesman. Her body took a toll, she was did not force herself and would only wrestle occasionally, including last in the early 1990s for LIWA.

She returned to the wrestling spotlight in 2004, when she accepted an award at the Cauliflower Alley Club’s annual convention in Las Vegas. “Thank you for being there and have an input into my life,” she told the crowd that night.

“I’ll be the first to admit that I am modest about my accomplishments. For me, wrestling was just something I enjoyed working, then I was fortunate enough to work in the business. The way I see it is I enjoyed the sport, and if you enjoy it you shouldn’t be awarded – being in it is enough in itself.”

She would live her later years in McDade, Texas, working at the local school district and raising foster children. Her and her husband served as parade marshals for the McDade Watermelon Festival.

She is survived by her husband, two sons, a daughter and five grandchildren.