The three-disc set The Best of Pro Wrestling Guerrilla Vol. 1: PWG Sells Out is nine hours of some straight-up wrestling that the average fan may have never seen or heard of. But after sitting through all three DVDs, this reviewer has realized that PWG needs more attention from the fans that keep pro wrestling in business. 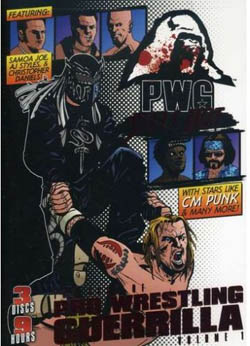 It’s hard to single out certain matches, but the Daniels-Evans match on the first disc is top-notch (Evans needs more exposure and he could be a stud as I’m sure SLAM! Wrestling colleague Jason Clevett can attest to) as is the Pearce-Kazarian cage match. Each match is in excess of 20 minutes (not the three-minute BS we get each week on Raw) and the ability put on display is truly awesome.

The Super Dragon-CM Punk match shows what Punk (a blonde heel here) can do when not tied down to a WWE character and it’s truly amazing. Dragon defending the PWG title against Samoa Joe (and winning via a cheap countout) is a match you may see on TNA, but all the wrestlers in PWG, regardless of the minute crowds in high school gyms, seem to be passionate and go all-out in each match. Joe and Styles always have good in-ring chemistry and their match on the first DVD is outstanding.

And seeing Gibson as a big-name wrestler just makes one shake their head when you see what he’s relegated to in WWE these days. His match with Styles is awesome. Gibson’s feud with William Regal these days? Putrid. Just wrestle for God’s sake.

The second disc has a solid PWG tag team title match between Evans and Strong challenging Richards and Dragon and it’s four stars at least. Hmmm, do we sense a trend with Evans? The crowd cheers and claps for both teams throughout and the end comes when Richards pins Evans to retain.

Cima and El Generico have a strong match and not to beat a dead horse, but no match is bad on any of these three DVDs. Some are better than others and all top even the best WWE pay-per-view matches. That’s because PWG is wrestling personified. Not sure WWE can say that.

The Briscoe Brothers get some time on the third disc in a tag match against Pac (not X-Pac) and Strong that’s a treat. Danielson (will he please get some major mainstream exposure?!?) has a pair of splendid matches versus Cima and El Generico that to say are outstanding doesn’t do them justice.

Kaz Hayashi (remember him, WCW fans?) and Pac battle in a high-flying encounter and that’s the thing. Even the lesser-known wrestlers have the talent, athleticism and skills to make a name for themselves. It’s just that PWG is a regional company (based in southern California) and one that Vince McMahon hasn’t sunk his dough into yet.

Other names on this compilation include a couple Wrestling Society Xers in Scorpio Sky and The Human Tornado as well as Scott Lost, Chris Bosh (not THAT Chris Bosh to all you hoops fans) and Excalibur, a part-owner of PWG that provides the optional commentary on all three discs. The commentary is pretty comical, but at the same time, it doesn’t take away from the matches.

Basically, PWG has it all together. As evidenced by PWG Sells Out, a second volume cannot be far behind. And that looks to be better than Vol. 1, if that’s possible. Like the back of the DVD says, any fan should have this set because for the price you’ll pay, it might make you feel like you’re ripping off the store. Ain’t that the truth?