Las Vegas was the site of NWA Pro Wrestling’s Fiesta Lucha! event back in February 2007 and Big Vision Entertainment has released the show on a two-hour DVD. Most of the wrestlers on the card may not be household names, but the matches are pretty decent and keep the viewer entertained.

Fiesta Lucha! took place at the Orleans Arena on Feb. 25, 2007 and featured wrestlers mostly from the United States, but a few Mexican wrestlers gets sprinkled in. Kris Kloss (Wrestling Society X) and C. Edward Vander Pyle call the matches. Kloss plays the Gorilla Monsoon face and Vander Pyle is the Jesse Ventura-type to make a comparison for all you ’80s fans.

The show kicks off with The Real American Heroes (Joey Ryan and Karl “Machine Gun” Anderson) mocking the Mexicans in attendance (pretty darn close to non-PC), only to have Los Luchas (Phoenix Star and Zokre) storm the ring. Not sure if there was supposed to be a match here, but a four-way tag match starts after a backstage interview with Bobby Joe Marshall, an Australian version of Vladimir Kozlov and/or Ludvig Borga.

The four-way tag team match, always a chance for a cluster you-know-what, has some nice action and nice flow as The Young Bucks hit stereo 450 splashes on Nathan Ruelz of the RGO (or EGO?) team for the win. Each wrestler hits spot after spot and Ruelz’ look is a green double mohawk that puts Shannon Moore’s to shame. The other teams in the match are Midnight Dynamite (Charles Mercury and Johnny Paradise) and Tommy Kim and JJ Perez. Ruelz’ partner is AJ Hirsch and the Bucks are Nick and Matt Jackson.

A sweet Human Tornado interview in the back where he says he can’t find his partner Matt Classic, gets followed up by Kafu, a recent WWE signee, against Peter Goodman, who might as well have been John Goodman. Kafu is a Bruiser Brody rip-off who does the hockey slashing call all match long. Squash city here. 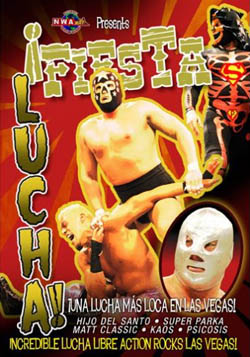 Big Q, who calls himself the “ghetto psycho,” chirps backstage about how he’ll win the 25-man battle royal later tonight because he’s the “sexiest piece of chocolate.”

Ricky Reyes and Marshall take on Colt Cabana (Scotty Goldman these days on SmackDown) and Sonny Sampson next. Cabana looks to be pulling double duty as (spoiler alert!) he’s also Matt Classic. Cabana has the comedian gimmick going and it’s definitely better than the DX toilet humor. Reyes and Marshall get rolled-up simultaneously for the duke.

Nelson Creed cuts a nice promo backstage about his match for the NWA Heritage title later on against Adam Pearce. Nice and intense and simple. Easy enough.

The King of the Summit battle royal is basically the Royal Rumble with a new wrestler coming in every 45 seconds. This match goes for almost 30 minutes and the final four are Kafu, Ryan, Goodman and Sexy Chino. Kafu took out 10 guys, but gets eliminated by Ryan and Goodman. Chino dropkicks Ryan over the top to win the marathon. This was a nice way to showcase everyone on the card and it flowed nicely. Ryan attacked Chino, but Kafu ran back for the save.

Matt Classic and the Tornado take on Los Pochos Guapos in a match normally seen on WSX. Los Pochos Guapos are former John Cena rival Jesus from WWE and Kaos. The Matt Classic gimmick is unique in that he’s a wrestler from the 1940s that was in a coma and awoke to not miss a beat. Tornado gets a splash off the top on Kaos to win it.

OK, now we get the Real American Heroes-Luchas match and it’s a Flag Match. Los Luchas get the flag, but Vander Pyle had run down to ringside to distract the ref. Pearce then hits the ring and takes the flag from the Mexicans, the ref turns and sees Ryan covering one of the Luchas and it’s over.

Pearce is backstage and has a rebuttal for Creed’s promo earlier. He tells Creed to make the most of his opportunity in front of 4,000 fans.

Nick Bockwinkel is in the ring for the Heritage title match. Pearce refuses to shake his hand and shoos him away. Wow. A screwy finish sees Creed KO Pearce with a chain (though plastic necklaces out of vending machines look more like chains) for the apparent title change after a ref bump and a second ref counts the pin. The first ref wakes up and reverses the decision. Vegas deserves better.

The main event (it wasn’t the battle royal?!?) has El Hijo del Santo and a, um, “bigger” Billy Kidman against Super Parka and Nicho El Milionario. Jesse Hernandez is the ref and if you’re a hardcore fan, you’ve seen him on ESPN Classic recently on the old Herb Abrams’ UWF shows and on the AWA shows from the late ’80s.

It’s obvious why this is the main event. Kidman and Santo are unreal. Towards the end of the match, Santo lands a huge dive to the floor on Parka that Undertaker has nothing on. The crowd is hot and Kidman cradles Nicho in the ring for three after all four were battling.

While not a five-star show, Fiesta Lucha! has a ton of sweet spots and never a dull moment. The crowd at the arena stays awake and focused and that’s definitely a good thing. The viewer did, too, so that’s another notch in the “good stuff” column for this DVD. Kloss and Vander Pyle play their roles perfectly and fit-in nicely with the matches.

Matt Mackinder’s sister, Lori, majored in Spanish in college and even studied for a semester in Mexico back in 2002 where she took in two Lucha Libre shows that featured Shocker.