TNA board game a home run

Recently, the Impact video game was launched for fans who want to recreate the TNA Wrestling experience at home. Now, through the new TNA DVD Boardgame, created and released by Game Development Company (GDC), fans now have the option for a more old-school method of gameplay. Recently, SLAM! Wrestling had the chance to visit GDC’s home office and was given some time to play the game.

The game mixes elements of traditional board games, and fantasy card and dice games (like Dungeons and Dragons or Magic: the Gathering), combined with a bit of memory recall skill, to create a fun experience suitable for the entire family. The objective is to guide a stable of TNA wrestlers to capture all four of the TNA championships (World, X-Division, Tag Team, and Knockouts), using skill, strategy, and luck. Players (2 to 4) move around the board and depending on the square they land on, have the chance to purchase wrestlers or attributes, challenge each other to matches for belts and/or cash, or answer a DVD trivia question. 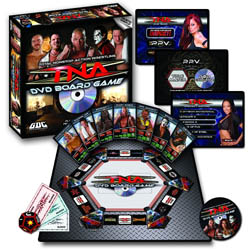 Matches are played out using rolls of the dice. Basic matches consist of players alternating throws of dice in a classic high-low elimination battle, with roll modifiers based on the character’s strength and stamina attributes as presented on the wrestler’s photo card. A special die gives a player a chance to go for broke by cheating to win, with the risk of things backfiring and resulting in an immediate DQ loss. There are special rules for the various types of gimmick matches that TNA is known for, including battle royals and House of Pain matches. The rules for these are more complex, so fortunately, the DVD comes with a handy Help feature that shows them on-screen. Depending on the number of players involved, the matches are actually quite fun to play out, and even those who aren’t directly competing can get into the action with side bets – so there are really no lulls in the game, even when it’s not your turn,

Landing on certain squares results in the player having to answer a DVD question. These are mini-games that utilize actual clips and photos from TNA’s video library. The questions can be spot-the-difference, memory recall, or fill-in-the-letters. GDC used hundreds of clips and they are randomly selected during the game, so each time the game is played will be different. TNA announcer Don West provides the voice-overs for the clips, adding to the authenticity of the experience.

The gameplay is entertaining and has a lot of longevity – because there are so many elements involved both in terms of luck and strategy, no two games are completely the same. Visually the game is stellar, from the full-colour photo cards of the TNA Stars and Knockouts, down to the board itself, which features a cool aerial picture of TNA’s signature six-sided ring.

If there is one complaint of the game, it’s that some players may find the DVD mini-games a bit too simple. However, that really depends on the skill set of the players involved, so it might not even be an issue. Even if it is, though, it’s one that’s easily remedied. One recommendation is to make up a “house rule” such as allowing any player to guess the answer in an open free-for-all, or after a certain time has elapsed.

Actually, the format of the game is flexible enough that you can enhance the game any way you see fit with a twist here or there – for example, increase the length of the game (average time is about 45 minutes) by making all title matches 2-out-of-3 affairs. Fantasy booking, such as nullifying TNA’s rule that a title can change hands on a disqualification, while not needed to enjoy the game, is certainly an option. The game also has blank wrestler profile cards that you can use to build a personalized character of your own. All of this adds to the appeal, and most importantly, the fun quotient of the game. GDC boasts that the game offers “unlimited game play” – and that’s not far from the truth,

Overall, the TNA Wrestling DVD Board Game is an excellent production, and strongly recommended for fans of the company, families, and board gamers in general.