Wrestling of the amateur kind is one of the skills that UFC competitor Marcus Davis will bring to the table when he competes at UFC 89 on Saturday, but professional wrestling fans may better know “The Irish Hand Grenade” as the man who “trained” Samoa Joe for his bout with Kurt Angle at Lockdown in April. 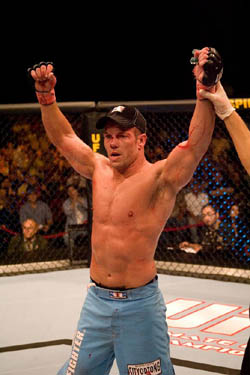 Fought inside a steel cage and with more than a hint of MMA influence, the bout is unquestionably one of the leading contenders for 2008’s Match of the Year, with a little over two months to go before fans can reach their own conclusion. Davis was stationed at ringside for the bout, though his participation in the events as a whole was down more to luck than plan.

“I was in Hollywood doing a photo shoot for the cover of Real Fighter magazine,” Davis explained to SLAM! Wrestling. “And the gym that I was being photographed in was also being used for a vignette for TNA, showing Samoa Joe MMA training for his match with Kurt Angle.

“The people who were filming it were from Spike TV, and it was kind of like a reunion for us, because we remembered each other from The Ultimate Fighter TV show. So I met Joe, and the TV people suggested playing it up like Marcus Davis is Samoa Joe’s MMA coach. So we just ran with it, and we shot it all inside an hour, I think. Then, when I saw it on TV, they said that Joe had been training in the gym with me for three weeks! Later, I got a phone call from TNA to ask if I would present the belt to the winner, and do an interview, so I did.”

Though not a big fan of professional wrestling — boxing and martial arts were always his true loves — in his youth Davis was familiar with the big players of the sports entertainment game, such as Hulk Hogan, The Junkyard Dog, Andre the Giant, and John Studd. Later, when he owned a bar just across from an arena in Massachusetts, his establishment was one frequented by the wrestlers after the matches.

“We used to have all kinds of wrestlers in there,” he said. “I remember one night when Hercules Hernandez freaked out in the club and tried to start a fight. The Undertaker was there that night, too. Thankfully we had help from the other wrestlers to get Hercules out of there!”

Going back to his dalliance with TNA, Davis was impressed by the camaraderie that he saw in the locker room, and the atmosphere that that produced.

“The people from TNA are really a tight-knit family — they are all really close,” he recalled. “You know, when two of the others are in the ring, everyone else is backstage watching the monitors, and checking out the match. The girls will be crying because they’re worried about the guys, especially since a lot of them go out there with preexisting injuries. It was kind of cool to see that go on, and be a part of it.”

When he got to the Tsongas Arena in Lowell, Massachusetts for the Lockdown pay-per-view, Davis, as noted, believed that he was there only to present the belt to the winner, and to do an interview. But that all changed, as he was soon informed by Kurt Angle’s agent, though he wasn’t about to let the Welterweight fighter in on everything that Kurt had planned.

“It’s actually pretty funny story. Kurt’s agent came up to me and said, ‘When you walk into the ring, we want you to try to shake Kurt’s hand, and he’s either going to shake your hand, or he’s not.’ Then he asked me if I had signed a waiver, so I said to him, ‘Just so you understand this, I’m a professional fighter. If Kurt hits me, I’m not a professional wrestler, and there won’t be a show. If he takes a swing at me, I’ll kill him.’ So his agent laughs and tells me not to worry about it.

“Later I went into the lunch room with Joe, and Kurt is sitting at a table on his own, and he invites us to come over. So we hang out, and Kurt asks if his manager had told me that he may or may not shake my hand. And I laughed about it, and Kurt said, ‘I’m just going to give you the finger. Don’t worry, I’m not going to do anything, ‘cos I know you’ll kill me!’ We both laughed after that!”

Angle himself has turned down offers from the UFC, including one which would have brought him to the company following his release from WWE. Of course, he instead took up the option to sign with Dixie Carter rather than Dana White, and Davis believes that Angle actually has no intention of ever changing from the six-sided ring, to the eight-sided one.

“He’s just talking about doing MMA — he doesn’t actually want to. He told me that he really respected what we do, but that he was too beat up and hurt. He wasn’t like, ‘Yeah, I’m going to do what you do.’ He may have talked about fighting against Randy Couture or someone else, but he just talks about it for the publicity.”

While the former Olympic champion may not wish to cross codes, the same cannot be said for Davis, who enjoyed his time in the TNA locker room enough to be happy to play out a similar scenario, should the occasion come up again. Stepping inside the professional wrestling ring as a performer, however, is not something that is on the cards.

“TNA was great for me, because I got to come across to another audience that may have never seen me in the UFC,” he concluded. “So through wrestling, they can kinda get to know who I am.

“I would do something again with TNA in the future, but I wouldn’t partake as an actual wrestler. I think what they do is much more dangerous than what I do! I want to be able to fight in the UFC, and I have injuries as it is. If someone threw me over the top rope, and I landed on my shoulder, for example, I could be done in terms of my MMA career, and obviously, that’s something I’m not interested in risking at this point in my career.”