Devine: Why I quit TNA

The questions are flying and the answers are few and far between, so I figure I will bust out a little column for now to address the questions for my fans and friends. Yes, I asked for a release from TNA. Yes, it has been granted to me. 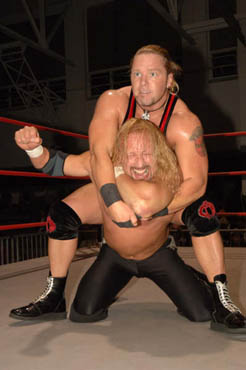 Johnny Devine wraps up Jerry Lynn at a Border City Wrestling show in Windsor on October 4, 2008. Photo by Mike Mastrandrea

Well that’s a long answer with a number of reasons — all of which are personal, and need not be thrown out there. For now I will simply say that I made myself a promise early on in my career. That was: when it’s no longer fun to wrestle it’s time to go. And it was no longer fun for me at TNA.

Now I realize that there will be many of you who will jump all over me and say things like, “I would kill to have that spot,” etc. But unless you have been there it’s very difficult to know how you would react in the same position.

TNA is a great place to work. The locker room is fun, the boys all get along for the most part. And everyone there can wrestle their butts off. But a lot of the time the guys are not allowed to show that, as it’s not what is right for the spot.

A lot of people don’t understand what does and doesn’t make a good wrestling match or TV show. I will simply use myself as an example of this. Simply put, my job is/was to make others look good. Did I do a good job of this? Yes. Sometimes too good? Yes. Could I have gone out there and done shooting star presses and 450 splashes galore? Yes. Those of you who know me know I am capable of many things in a wrestling ring. Would it have made my opponents look good? No. Would it have been too flashy for my role as X Division traitor? YES! Thus I didn’t do the things people wanted to see, I did my job and did the things people didn’t want to see.

I take a lot of pride in my job. It is my one MAJOR vice. Perhaps I have too much pride but that is my failing. I trained very hard with everyone I could to learn everything I can about the wrestling business. I still do it today and try to learn something every show, or every opportunity. The veterans who “knew” me always got questions as to the whys and hows of the business side of things. So when so much effort is put into something you are not allowed to show or capitalize on, it can get rather frustrating. And that frustration builds over time. Mine built to the level where I was no longer enjoying the little I was allowed to do. And that in a small nutshell is why I needed to leave.

What’s next for me now? Well, school is the first thing on the list. I am going to take a broadcasting and TV production course and see if the other side of the camera is as exciting as being in front of it.

Wrestling-wise, I will continue to work indies and instruct at Scott D’Amore’s Can-Am wrestling school in Windsor Ontario. So I am not gone form the biz — just looking at things a little differently.

Hope this helps to shed some light for those who have asked.

All the best with your future endeavours and yours is truly a butt that won’t quit!

Be safe and stay hot!