TORONTO – When TNA invades nearby Oshawa, Ontario this Sunday for the No Surrender pay-per-view, the event will have extra special meaning for TNA Knockout Angelina Love. 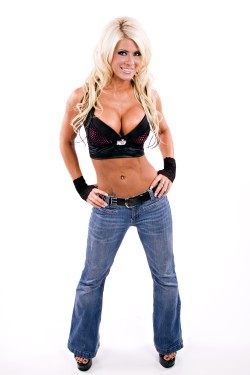 Born Lauren Williams, Love will be in her backyard as she grew up in the Toronto area, and actually attended post-secondary school at Durham College, which is located in Oshawa. To make things even more patriotic, she will be facing fellow Canadian, Taylor Wilde, at No Surrender. “For a company like TNA, that’s been growing so rapidly, to be coming here, with so many Canadian wrestlers on its roster, its such a cool thing to be happening,” she said. “A lot of my buddies from Durham College will be there for the show — it can’t get any better than that.”

Love recently sat down with SLAM! Wrestling and explained that she is not only excited about her match, but also the Knockout division as a whole. “TNA took a big chance (bringing) in all the girls that they did. It was a gamble, and I think it’s succeeded beyond anyone’s expectations.”

She bases the success of the women on their individuality. “Everybody has their own different look, and that means you’re going to see different things each week. We can all wrestle, which is a huge difference between the (WWE) Divas and the Knockouts.” Love is not basing these opinions on rumour, but from her own brief WWE experience in the developmental system. “When I got signed by the competition, I had my hair all braided and I was told to take them out, it was too different of a look,” she explained. “I asked, ‘Do they not want something different, or do they want twenty of the same girl?’, and I was told twenty of the same girl. I became Random Blonde 14, and it really didn’t mean much”.

As a whole, the 26-year-old wrestler believes that it is the company’s young stars that make TNA interesting and unique. The X Division and A.J. Styles make the top of her list, “The X Division (are) all young with very bright futures ahead of them — (Styles) can do anything in the ring … I think everybody would put him at the top of their list.” She is sure not to forget her fellow ladies as well, “I think all of them are up-and-comers and can really change women’s wrestling from what it’s been for a while to what it should be.”

However, Love knows that TNA still has a ways to go before they can be considered a threat to the WWE. She believes that one of the solutions has to come from management in the form of more marketing. “Getting Spike TV was a huge move. And I’m really glad that they’re doing more house shows and travelling for pay-per-views, because the Orlando crowd (where TNA tapes their weekly television) is spoiled.” Love goes on by saying, “you’ve got to market and promote it as much as possible and in as many places as possible, and stay on it. I certainly hope it continues to get bigger and better.”

On a personal level Love admits that she would jump at the opportunity to take a run at Hollywood. “I love doing things in front of audiences — I’m a huge mark for crowd reaction … I’ve done a couple of small things, some indy films and some fitness modeling.” Love said. “I know my body’s not going to stay in one piece forever — I’ve already had reconstructive knee surgery. I would love to have a lengthy (wrestling) career, but I don’t know if little old me can go on forever … So (movies) are definitely something I would like to pursue.”

Love, one half of The Beautiful People in TNA with Velvet Sky, finished off her time with SLAM! Wrestling by explaining how positive her time with TNA has been since rejoining the company in September 2007. “I’m thrilled with my experiences so far. They’ve really given us (Knockouts division) a great opportunity to show what we can do. In the ring, we can really, really go. I think that’s what people want to see, and I think the ratings speak to that too.”

TNA presents No Surrender live this Sunday at 8 p.m.