TORONTO — Big Sexy, Diesel, Nash, or just plain Kevin; the former world champion and current TNA star sat down with SLAM! Wrestling to discuss his past, present, and future.

In Toronto to promote this Sunday’s TNA pay-per-view, No Surrender, in nearby Oshawa, Ontario, Kevin Nash was extremely accommodating to any and all questions.

Mr. Nash pulled no punches and was quite honest in describing how difficult it is going from a headliner to his current supporting role. “It’s hard after being featured for so long to not being featured,” he said. “When you’ve slowed down and you’re not as athletic and as young as you once were, you don’t see it. People see it, but you don’t see it … I can’t watch myself sometimes.” 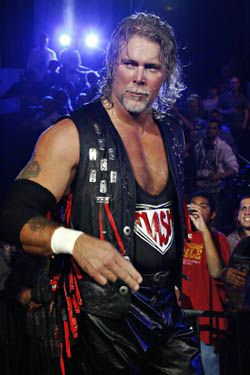 The former ‘clique’ member and backstage politician has matured over the years, and came across as humble when describing personal ego versus what is good for business. Nash cites a recent example in TNA where he almost tried to make himself the focal point in a Samoa Joe/Booker T feud. “If you look at things intelligently, you realize what’s best for Kevin Nash isn’t necessarily what’s best for business. When you’re completely blinded and don’t see that, then you have a problem,” reflected the big man. “I understand that and I see it — that doesn’t mean I have to like it.”

Nash joked that maybe his non-main-event status is because he is not quite the politician he used to be. “Maybe I haven’t been the angry, grumpy Kevin Nash enough. But I’ve had my time in the sun, so I’m quite sure I can live with a supporting role.”

The six-time heavyweight champion believes, without hesitation, that the most promising performers in TNA are A.J. Styles and Samoa Joe. “When you watch a guy like Joe closely, you realize he is the real deal. He can take us to the next realm with his athleticism.” Nash continues his praise for Joe, “he has a very different look, he doesn’t have that chiseled body … Joe’s kind of an every man’s champion.”

However, it is not only the men of the company that Nash is impressed with. “The women have really helped carry the numbers for us. I think our women are superior to what WWE puts out. Our girls can fight and look good doing it.”

The Trent, Michigan, native also puts his two cents in on controversial creative team member Vince Russo, and former WCW head Eric Bischoff. “Russo gets a really bad rap from a lot of people — people chanting ‘Fire Russo’ and all that. Vince doesn’t do so much with the Xs and Os of the wrestling. He basically does the story driven part of the show.” Nash goes on by saying, “I think he does a good job of developing and explaining characters.”

With a successful career spanning nearly two decades, the next logical question has to be, “What is there left to do in the business?”

“I always wanted to play the aging wrestler. Guys never age — their hair just keeps getting darker. I remember in the locker room with Randy [Savage] and Hulk [Hogan], and they had no body hair — I couldn’t get why they would do that — then one morning I looked in the mirror, and saw that I had a grey chest hair. And I got it.”

Nash believes that a character needs to age, especially if the wrestler has been around for a couple of decades. “Nobody ages in wrestling, so I kind of want to be that character that does.”

Having been cast in a couple of films, most recently The Longest Yard remake, more acting is definitely an avenue that Nash would consider if the opportunities arise. “With my size, it’s hard to put me in anything. The guy who’s 5’8″ and is being paid $20 million doesn’t want eyes averted to the guy like me who’s 19 feet tall standing behind him,” Nash joked. “If they need a giant monster who has to carry a 220-pound suit, that’s when they think, ‘We can use this Nash guy.’ … But if it comes down to Ocean’s 15, I don’t think they’re thinking, ‘Well, it’s between George Clooney and Kevin Nash.'”

Nash also has his own theories on the secrets of character longevity in the wrestling business. Simply put, “a guy has to have two things: First, the male demographic that watches has to want to be that character. Second, the women in the crowd have to want to be with him. If you have those two things, and can put a sentence together, you have a chance at some longevity.” Big Sexy makes a valid argument as he gave Shawn Michaels and Bret Hart as specific examples to his hypothesis. 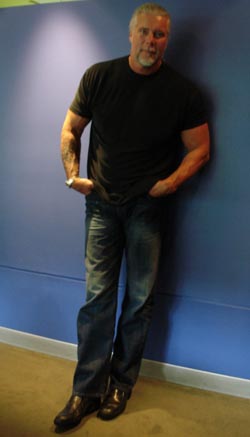 Nash is quite candid in describing superstar types who he does not believe can last. “I don’t think I would particularly want to be Big Show, nor do I think the majority of women would want to be with Big Show, or Khali … they’re big giant guys, but they’re not going to have that longevity.” Nash playfully apologized to his former co-worker. “Sorry, Paul (Wight), if you’re reading this. There’s very few deviations from that formula for guys to be super successful. I guess you’re either blessed with genetics or you’re not.”

Getting back to the present and what TNA needs to do to get to that next level of success, Big Kev, had two words — more marketing. “I remember when WCW decided to make a run, we put up a billboard right across from WWF’s headquarters with a picture of Sting’s face that said, ‘This is the face of wrestling. This is WCW,'” he recalled. “You have to spend money to make money. Eric Bischoff had a vision. He spent a lot of money to bring in talent, and he spent a lot of money on marketing.”

Nash believes that there are definite problems with TNA’s current amount of exposure. “I’ve walked through airports and people recognize me as Big Sexy or Kevin Nash, and then ask me, ‘When was the last time you wrestled?’ and I say, ‘Last Thursday.’ So there’s a huge problem.” He then stated, “If people have no idea that on Thursday nights I’m still available to be viewed. There’s your problem. It’s not what’s going on in the ring … We’re doing our end. Somebody needs to pick up the slack on the other end to make sure they know we’re on. And I’ll take the heat for (saying) that.”

With Nash’s TNA contract expiring in under six weeks, his future with the company and within the industry is uncertain. Regardless of what lays ahead down the road he has definitely enjoyed the ride. “Growing up on the south side of Detroit, if someone had told me I’d be where I am today, I would have said, ‘Not a chance,'” he admitted. “I still get a pinch-me-it’s-real moment every time I get to fly first class. If lightning strikes me on the way out (of this building), I’ve led a good life. I have no regrets.”

TNA presents No Surrender live this Sunday at 8 p.m.