TNA superstar Robert Roode is looking to shatter the stereotype that all Canadians are friendly and polite. And even though his countrymen might give him a hero’s welcome when the company brings its No Surrender pay-per-view to Oshawa, Ontario, on September 14, he isn’t measuring success in the number of cheers he gets, but rather in remaining as part of the company’s number one tag team.

“Some people like to cheer us,” he conceded to SLAM! Wrestling, “I guess. I think Beer Money (his team with James Storm) has almost a cult following. But we definitely like being heels. We don’t perform any differently, but some people who booed each of us as singles guys seem to have taken to us differently as a team. It’s just one of those things.” 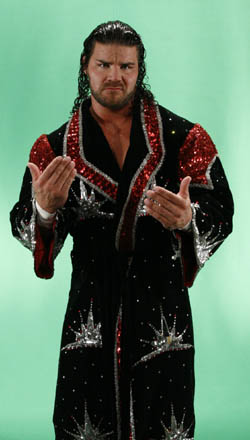 Regardless of whether they’re liked or not, Roode’s main concern is that Beer Money continue their reign as champions. It’s the third time that Roode has worn a Tag Team strap (the first two were the NWA Tag Team titles which he won as part of Team Canada), but that doesn’t mean the lustre has faded.

“It’s always a big deal when you win any world title in a company like TNA,” he said. “I’ve always been a huge tag team wrestling fan, so to be in the spot I’m in, it’s a lot of fun.”

He attributes a lot of that to being partnered with Storm, himself a multiple time tag champion. Though their pairing might not have been obvious, since both had been in lengthy singles runs before they joined forces, Roode is very happy with what they’ve been able to accomplish together.

“Before Beer Money was officially formed, we had some tag matches. I guess the office saw something in us, and decided to put us together, and it’s worked so far. We have some good chemistry. It’s been great.”

Naturally, Roode won’t rule out a singles run again if the opportunity presents itself. In another company, he might even prefer a singles career. But, he pointed out, other companies don’t give tag team wrestling as much prominence as TNA does.

“I think in a lot of companies, the art of tag team wrestling has really disappeared. When I was growing up,” he reminisced, “there were so many great tag teams — you had the Hart Foundation, the British Bulldogs, the Legion of Doom. In recent years, other than Team 3-D, you haven’t seen a lot of those standout teams. Fortunately, TNA has really committed to tag team wrestling and has kept the division alive and given us a place to shine.”

Though as of press time, a Beer Money title defense hasn’t been formally announced for No Surrender, it’s likely that the pay-per-view will indeed be his next opportunity to do just that. Belying his heelish ways, Roode can’t help but be pleased at the thought of wrestling in front of a home audience.

“We had a great crowd in Oshawa last December,” he recalled, “and we’re expecting it to be even better this time around. It’s always fun to wrestle in front of friends and family. The Canadian crowds, I feel, are a lot different than U.S. fans — Canadian crowds are a little bit wacky. So I would say that if you can get to see us in Oshawa, or in London the day before, you definitely should.”