Legendary Mexican wrestler Alfonso Dantés died early Wednesday morning at his Mananzillo, Mexico home. El Financiero out of Mexico is reporting that he died from cardiorespiratory problems from inactivity. He was 65.

Dantés was known as being a tag team champion with Mil Mascaras as well as his feuds with Chavo Guerrero that stretched from Los Angeles to Mexico City during the late 1970s. 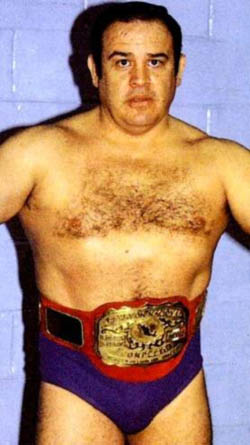 The son of Al Amezcua, who wrestled in Mexico as Golden Terror, Dantés was born in Guadalajara on April 13, 1943. His birth name was José Luis Amezcua Díaz. He and his brother Vick would follow their father into the sport. Vick would go on to wrestler as Septiembre Negro. The two were trained by Diablo Velasco, who is said to have given him the name Alfonso Dantés.

Dantés made his debut in 1960 at the age of 17. He was given a strong push right from the start based on the reputation of his father and brother.

It is unknown when, but within his career, he is credited for inventing the Toque Tapatio. The move would go to bigger fame when Satoru Sayama, the original Tiger Mask in Japan, made the move famous as the Tiger Suplex.

He received the nickname “El Tanque” which means “The Tank” for his short but thick build. He was 5-foot-8, but wrestled sometimes as large as 230 pounds.

Dantés’ first major title would come when he defeated Raúl Reyes for the Mexican National Light Heavyweight Championship on May 5, 1965. He would lose the title in February of the following year but would go on to win the title twice more, finally losing it on December 27, 1981, to Babe Face. The title is now famous in Mexico because of its rich history, non-affiliation to any one promotion, and it is currently held by Mexico’s biggest star, Mistico.

He also was able to win the NWA World Light Heavyweight title three times in the 1970s, including defeating Chavo Guerrero on April 15, 1977, in Mexico City.

Mil Mascaras, Francisco Flores and El Medico would all be Dantés’ partner in winning the Los Angeles based version of the NWA America’s Tag Team title in 1969; all three reigns would last only a month or less.

Jeff Walton, who worked public relations for the promotion out of Los Angeles, remembered Dantés stay in Los Angeles but memorable. “He was quick to learn the American style of wrestling,” Walton recalled. ” He didn’t stay here all that long, but he set the mark for really great workmanship in the ring.”

Dantés never donned a mask, although he was often involved in mask and hair matches in Mexico. He was involved in a famous triangular tournament where El Halcon lost his mask. Halcon would go onto to be Dantés best known opponent where Dantés was able to capture the hair of El Halcon. Dantés would also take the hair of El Faraon as well. 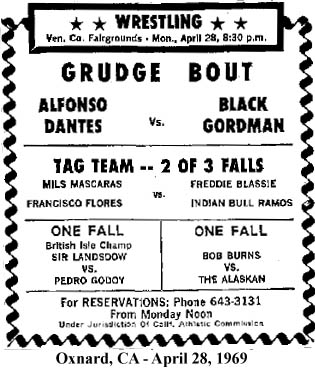 He also had his hair taken on a number of occasions including a match on April 22, 1978 where he and Blood Chicana lost their hair to Pharaoh and Ringo Mendoza.

When it seemed his career was winding down, Dantés was able to capture the Mexican National Heavyweight Championship from Cien Caras on March 30, 1984, in Mexico City. Dantés would lose the title but win it back one last time on August 8, 1988 when he defeated Gran Markus, Jr. Dantés would vacant the title when he chose to retire in March 1989 at the age of 45.

In his last years, Dantés would often team with his sons Apolo and Cesar. Apolo would go onto the greatest fame, often teaming with Dr. Wagner, Jr. and El Hijo Del Santo in a brutal feud with Headhunters in Japan. Apolo would also appear on WWE’s short-lived lucha libre show Super Astros in the late 1990s.

He was well respected within the industry for his work ethic and innovation in the ring. He was part of the inaugural class of the Wrestling Observer Newsletter Hall of Fame in 1996.

Dantés’ body will be transported to Guadalajara today for the funeral ceremony.