With TNA’s second set of trading cards hitting the streets from TRISTAR, I recently found myself recalling my involvement with the first-ever TNA cards, produced by Pacific, back in 2004. Then I called a few others who were involved with it too.

One day in 2004, I got a call out of the blue from former Pacific Trading Cards executive Jeff Morris and by the time I hung up the phone I had a short amount of time to write card backs for a wrestling set with some known wrestlers and many unknown grapplers. So I called upon my website partner Doug Cataldo and after I explained it to him we quickly chose who we intended to do picking out our personal favorites and then Doug saved me by taking all of the lesser known wrestlers because he had a great knowledge of them.

“We were in Nashville for the 2003 NHL Draft, and I went out to a bar on Printer’s Alley with Mike Waddell, who is an industry veteran. Mike and I had worked together in Nashville at Shop At Home. All of a sudden, Don West, who was our on-air guy at Shop At Home, walked in with a gang of pro wrestlers for a party. Don joined us for a beer, and was telling us how he had landed the gig as the play-by-play commentator for TNA Wrestling. We exchanged a few e-mails and we started to follow TNA, and we saw the growth and potential for TNA. We started negotiating the contract, and within a year, the Pacific TNA product was on the market,” Morris remembered fondly.

So the project was off and running and we were feveriously trying to get the 75-card checklist done as well as the inserts. When we made the deadline we breathed a sigh of relief and then all we could do was wait until we got the cards in the mail like every collector.

“Dixie Carter and Jeff Jarrett and everyone at TNA were great to work with. They saw us as a vehicle for helping promote TNA and create brand awareness, and the wrestlers were great to work with,” Morris added. “We created the product for fans and included autographs and tattoos. We had a good relationship with TNA and were hoping it would be a long-term one as wrestlers like A.J. Styles were growing in popularity. Unfortunately, Pacific would close its doors a few months after the product was released, after the NHLPA informed us they were not going to renew our contract. The TNA set had a moderate success out of the gate, but over the next year, as TNA grew, the popularity of the set grew with it and sales remained steady. I’m really glad to see TRISTAR taking on he project, because they will put a lot of care and effort into the set and TNA has a very passionate fan base.”

While I was waiting for the set to come out, Sunshine Girl Traci Brooks was in town and we talked about the set. I had her autograph her card and she signed it before I got it out of the top loader! She was as sweet as can be and eager to talk about her new gig in the federation and her new card.

“I’m in my school-girl gimmick,” said a blushing Brooks, who loves to the northeastern U.S. and was very excited to get a trading card. “I used to wrestle a lot in this area with WXW (a league run by former Wild Samoan, the legendary Afa). Pennsylvania is great for wrestling.” 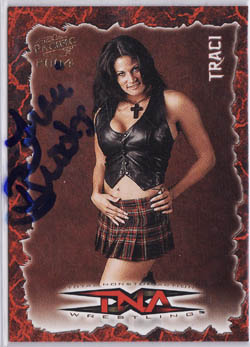 Then the conversation changed to pig farming and the Hilton sisters. She hails from St. Mary’s, Ontario, near London, and.grew up working on the family pig farm.

“I just wanted to throw them in the pig sh**,” said Brooks. “I give them credit for doing it, I don’t know what it’s like to be them … I couldn’t live the way they live. I would like to try. I couldn’t let someone do everything for me.”

I also had a chance to talk to Trinity who was one of their top female wrestlers at the time and a known Hollywood stuntwoman.

“I was glad they made a wrestling card of me,” said Trinity. “I was so excited that we have cards. I used to collect cards when I was younger. I always wanted to be a super-hero!”

So the cards finally came in and we loved the results. I had pulled a Roddy Piper autograph card and I was thrilled about that. And then I read the card back, and the copy we sent in, and quickly called Cataldo because what I had written had changed! At that point after a phone call or two we found out that our funny and edgy card backs were toned down a bit (even for TNA Girl Lollipop!). Oh well, the cheques did clear and we were part of the creative process and that’s always fun.

Still to this day fans will ask me about the A.J. Styles cards or about the process and how many parallels there are. It’s amazing to me that these cards have lived on and gained popularity over the years.

“I had a lot of fun helping with the writing on the original TNA trading card set from Pacific. I learned a lot about some of the new guys on the roster who are now some of today’s top TNA stars. I also really wanted to be a part of the set because at that time I thought the wrestling industry was getting incredibly stale, much like the trading card market, and that TNA would be great competition to the stagnant WWE,” said Cataldo. “I am happy to see TNA delivering such a quality product these days with the likes of Kurt Angle, Booker T, Christian Cage, Samoa Joe and it is good to see a new trading card set on the horizon.”

Well, the second series is out and TRISTAR has produced them. Check out my review: TNA back in the card business.

Russ Cohen, the producer of Card Corner, is a longtime wrestling fan from the northeast. Look for more trading card news from Russ in the coming months.