If you’re partial to skit-free pro wrestling and lascivious babes beating the tar out of each other, then ChickFight Collection: Goldrush is for you. 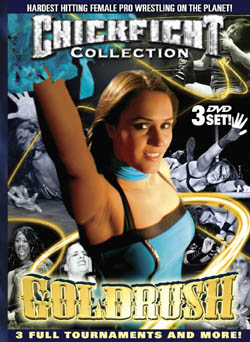 The matches have hardcore aspects to them, with the gals occasionally taking their fights out of the ring to bowl over rows of steel chairs with their opponents, whip each other into guard rails, and even knock themselves down concrete steps.

These girls are intense and brutal. No one’s fooling around here with thinly veiled beauty contests or strip teases. A couple of inter-gender bonus matches reveal the ladies aren’t afraid to mix it up with the lads either.

Adding to the smash-mouth action are the girls’ impressive and varied arsenals. Don’t expect a clothesline exhibit here, as one is treated to a mix of old school fundamentals and a variety of innovative acrobatic and ground moves, including a plethora of submission and pinning combinations.

Still, it might have been a good idea to let the girls cut some studio promos, even if only to allow the viewer to gauge their abilities on the microphone. Granted, some of the wrestlers address the crowd from the ring, but the recorded sound is distorted enough to make it difficult to clearly hear what they’re saying.

Another drawback is that only sparse crowds attend the shows, which somewhat takes the shine off of the bouts. Also, the commentators do little to further the stories or adequately put the competitors over.

But these are relatively minor quibbles. The DVDs, packaged and released to a wider audience through Big Vision Entertainment, are first-rate (and at $19.98, a great buy), with around eight hours of matches that include performers from Japan and even former two-time WWE women’s champ Jazz. But more importantly, they foreshadow the female wrestling stars of tomorrow.