There have been numerous professional wrestlers who have turned to the police work after their wrestling career wound down — Johnny Smith, Archie Gouldie, Hurricane Smith, Johnny Weaver, to name just a few. But to do it the other way around, to be a cop-turned-wrestler, is a rare feat. Add in a legitimate amateur background, and it’s scarcer. 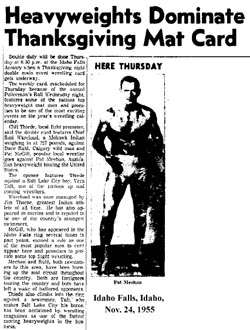 Born around 1908, Meehan walked the beat as an Edmonton cop; but it was an amateur wrestler that he made a name for himself.

In May 1934, Meehan claimed the Dominion championship as a heavyweight in an amateur bout in Lethbridge, Alberta. The story was easy to write for the Lethbridge Herald, as it pitted two police forces against each other — the champion was Jack Lyttle of Regina.

Here’s the description of Meehan’s victory: “Lyttle, present holder of the Dominion championship, took things calmly throughout the first round. So did Meehan. Neither man could gain the upper hand and they remained on their feet throughout. Second round started in much the same manner. Lyttle clamped a headlock on Meehan and threw him over his hip. Meehan reversed the situation with a half twist which rolled him over on top of Lyttle. The twist broke the headlock. Meehan got a cross-body armlock and secured the first fall in 2.22. Meehan completed the rout of the Dominion champ when he flattened him with a series of crossbody armlocks which resulted in the second fall in 3.26.”

In August of that same year, Meehan represented Canada at the British Empire Games, held in Wembley, England. He made it to the heavyweight semi-final, where he lost to an Australian named Knight. “Meehan was always the “underdog” in his tussle with Knight and showed little in the way of an attack,” reads the Canadian Press report of the bout. After the final, which Knight won, Meehan was given a crack against the losing finalist, Dodgeon of Scotland. Meehan was impressive in the battle for second place, and threw the Scot in eight minutes.

By early 1936, Meehan had turned professional, going at about 235 pounds.

“Pat Meehan, Edmonton’s grappling cop, is on long leave of absence from the capital forces, but has not permanently resigned,” recounts the Lethbridge Herald in an article entitled “He enforces his own laws, previewing a May 2, 1936 bout. “He has done some campaigning in the northwestern states, often squirming six times a week so that already in his brief professional career he has participated in 50 bouts.”

Though no real surprise, publicists in the wrestling game took liberties with the facts as Meehan was promoted for shows. 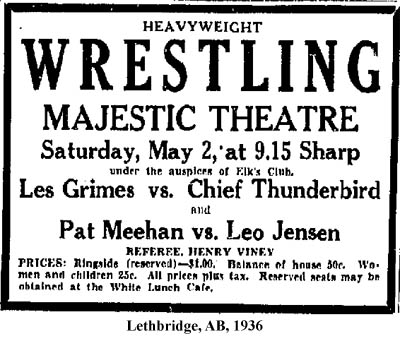 A Fresno, Calif., card in May 1937 says Meehan is a “personable Irish ex-mountie” who “specializes in the spectacular dropkick to the chin and it is through his pet weapon that he hopes to dispose of his rough adversary.” Fifteen years later, Meehan was apparently still able to jump: “Meehan is a master of leg locks and can use his feet with an adeptness that is amazing.”

The next year, he was from Down Under, for a Long Beach, Calif., bout. “Pat Meehan, good-looking Australian heavyweight champion, endeared himself to local mat fans with his sterling draw here last week with clever Bobby Managoff.”

The Australian connection is at least somewhat true. In a 1962 story about his life, Meehan talked to the Billings Gazette. “I spent quite a few years in Australia,” he said, and claimed to be the Australian champion in the 1940s.

As his career wound down in the mid-’50s, Meehan still fed off his early days as a policeman. A September 1955 Stampede Wrestling program said that Meehan “looked to be at peak form when he swung into the 1955-56 campaign last week” and that he is “an exponent of the more scientific type of grappling, in which holds and leverage count.”

In the newspaper article, he claimed that his last match was in 1958, though a Stampede show in Edmonton on Christmas Day 1961 must have slipped his mind — he was likely home for the holidays from his life as a “slow-talking big man, still without much of a paunch” in Billings, Montana.

In Billings, Meehan worked in insurance, and also handled publicity and helped out on the mat cards at the Shrine Auditorium, where the promotion was run under the name, The Midland Wrestling Club.

Meehan died January 10, 1974 at the age of 66. The Dahl-Brown Funeral Chapel buried him, and the funeral service was held at St. Thomas Church in Billings.

This story is a good example of Greg Oliver’s inability to let a tangent go. Had he found out about Pat Meehan years back, Meehan probably would have been in the The Pro Wrestling Hall of Fame: The Canadians.