Hustling to keep up with Paul Heyman 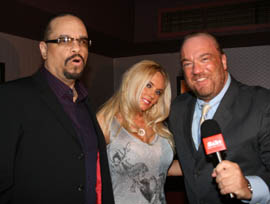 “The Heyman Hustle came about through a series of circumstances,” explained Heyman. “The original concept was just to do a one minute mobile program for international distribution based on New York City. Mitchell and I went out and shot a pilot. It was test marketed overseas, and that was going to be called The New York Minute. The feedback was astounding, and they wanted more so we expanded it to be a three-minute mobile offering. They test marketed it, and we called that The New York Hustle. Fortune Star Entertainment, which is the Asian production and distribution arm of News Corp/Fox, was handling all of the digital and mobile internationally for that corporation at the time. They said you have to call this The Heyman Hustle, so we went with it.

“It is different from what the original concept was and even different from the second, third or fourth concepts,” continued Heyman. “That is just a work in progress, and the evolution of a concept. Based on the feedback, test marketing and the test audiences it played in front of, this is what we came up with. It became the flagship show of News Corp’s new global broadband television network. It is shot in HiDef, which makes it different than all other broadband offerings because it’s not shot on a home video camera. You can take the footage that we are shooting, play it on a movie screen and it will look beautiful. So, it’s really not shot to be an Internet television show. It’s shot to be a television show that just happens to be distributed right now on the Internet.”

Heyman and Stuart formed a friendship nearly a decade ago when they were introduced to one another through a mutual attorney. Stuart wears a variety of hats in the entertainment business including director, executive producer, and music producer for the online music program, Stripped Raw and Real, which has featured acts such as The Killers, Bon Jovi and Miranda Lambert.

“I have admired his work greatly because he was one of the true pioneers of High-definition in New York City, and he had a sterling reputation in terms of being an innovator and the head of a creative think tank,” said Heyman describing Stuart. “He has never been held back by convention, but also respects those who preceded him in production. We got together sometime probably in 1999 or 2000 and started brainstorming different concepts that had nothing to do with wrestling. We just found that we had a great rapport. We didn’t think alike. We had different opinions, but we knew how to make them mesh and gel. I became a huge fan of his intelligence, creativity and work ethic.” 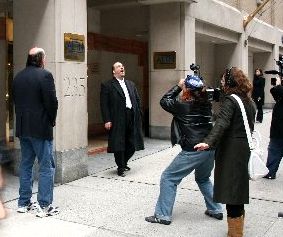 Stuart recently described his role regarding The Heyman Hustle with SLAM! Wrestling via telephone from his residence in NYC by explaining, “I created the series with Paul when we were working on a couple of screenplays together. We both assume producer responsibilities, and I direct most episodes. It’s totally ad-libbed on Paul’s part, and my job is to document that chaos and develop a thread that works stylistically. Our collaboration is based totally on trust. He trusts me to capture everything, and I trust him to know the boundaries under which we’re shooting. So far, it’s worked perfectly and we’ve never crossed over into each other’s shoes.”

Given Stuart’s involvement with the music industry, viewers can expect music to become a bigger part of The Heyman Hustle. In fact, singer-songwriter Gavin DeGraw, bassist Duff McKagan and musician Cisco Adler among others have appeared on the show thus far.

Stuart further elaborated on the role music plays in the show by saying, “Music is really going to be a big part of the show as we keep going forward. Having an extensive background in music, I have made some really good relationships within the music community.” The goal is that music will have a bigger role in the show, with plans afoot for Heyman to go to Los Angeles and Nashville to interview more musicians. On one occasion, a spur-of-the-moment tune led to a musical bit in a Hustle episode. “Dean Jarvis is the music director for Nelly Furtado. Dean has been an amazing partner and collaborator on the music side,” Stuart said. “I had this theme in my head, but I didn’t have time to record it. So, I called Dean and sang him the idea. It was based on this obscure cartoon show from the ’60s called Courageous Cat and Minute Mouse. He turned the idea around and had it completed within two hours.” Jarvis also wrote The Hustle Swing, the theme song to Heyman’s show. 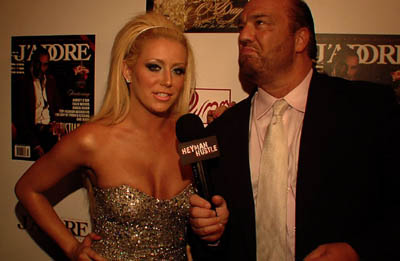 Instead of running from or denying Heyman’s former ties with wrestling, Heyman makes both obvious and subtle remarks about it including the occasional comment about WWE. It is also very evident Heyman is having fun letting loose in situations he may not be able to fully control, but he can manipulate — which is a good thing for viewers.

“We are not out there to make anybody look bad,” explained Heyman. “We are out there to have fun with somebody and show a different side of their personality — a side that you haven’t ever seen before and just have fun. Here is somebody in the middle of a grueling promotional tour having fun, enjoying themselves, having a laugh, and showing you their personal side.

“I am having a really good time doing it,” continued Heyman. “I am still creatively challenged by it because it is a four to seven minute show, and you have to keep it so entertaining because it’s so much easier to just plop down in front of your television set, kick your feet up and say ‘entertain me for thirty minutes’ than it actually is to get somebody to invest the time to click here, click there, push the button, hit play and actually intently watch a broadband show.”

So, what exactly does the future hold for The Heyman Hustle?

“I am curious to find out myself,” said Stuart. “I don’t want anything that is forced. I know that Paul doesn’t want anything that is forced. It has to be organic. Right now, it seems to have a mind of its own in terms of how it’s growing. This is a documentary series, which is how I look at it. By documentary, things come to you and you react. Given that we are shooting with New York City as the backdrop at the moment — and it’s the most amazing high energy place in the world — you never know what is going to happen, which is the best part about it.” 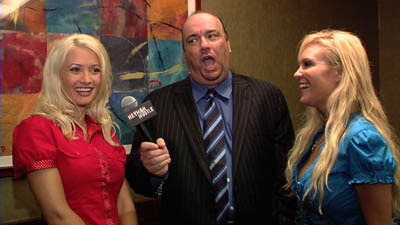 A perk of the job — Heyman interviews Playboy playmates.

There have been proposals to turn the concept into a reality TV series; however, it appears as though The Heyman Hustle will remain exclusively online for the foreseeable future as well as a potential DVD release down the road.

According to Heyman, “We have several offers right now to turn this into a reality show to do the interviews in real time or the way we are doing them to show the behind the scenes insanity getting to the interviews, setting up the interviews and letting the celebrities know this is not just a straight interview ‘hey, how you doing? What’s your next movie? What’s your next project?’ I don’t know if we are best served jumping in that today or maybe in the future, if at all. Right now we have so much traction doing this show the way we are doing it. To expand it onto a totally different medium, which would be making it a television show, may be counterproductive.

“I don’t know if The Heyman Hustle is better served being a four to seven minute program over and above being a thirty minute program,” continued Heyman. “We have heard a lot of good ideas about how to make it a television show, just none that I am ready to make that commitment to especially with the fact that we are working on other projects as well. To do a television show would require an extraordinary investment of time that I don’t know if we are ready to make at this point.”

Are you going to attempt the hustle the United States Presidential candidates this year?

“I would like to interview the presidential candidates. I would like to sit down with them and have a serious discussion with them. I wouldn’t want to disparage them by taking John McCain on a rollercoaster. I would break the format that we have been using and have a sit down political discussion with either one of them. That again would show a different side of our personality that we haven’t had a chance to expose yet. We started to do that with Ice T, and he carried that show. It’s not just a comedy show, and it’s not just a personality piece. I would really like this to be a very diverse offering.

“We have shot some stuff that hasn’t aired yet that is really poignant. It’s about issues that I don’t think as a show we are ready to tackle just yet. As we grow this show, we find doing the personality pieces is what people are looking for. As the audience grows, there will be a time to bring out a very poignant episode. I would welcome the opportunity to sit down with either Senator McCain or Senator Obama and the geopolitical ramifications of global warming, the next several nominees to the Supreme Court, the ramifications of pulling out or staying in Iraq, the economy, the social economical ramifications of a different health care system being implemented. These are all things that I am extraordinarily interested in and would so cherish the opportunity to discuss with these people. Whether that happens or not, I don’t know. It is certainly not something I would shy away from. Am I actively trying to pursue it? It has to be the right time, the right place and the right approach. Being that neither Senator Obama or Senator McCain have made themselves available in a massive press sit down of one on one interviews in New York, the opportunity has not presented itself yet. If it does, I will be clamoring for that opportunity and pressing our luck to see if we can make that happen.”