Mat Matters: The way it used to be

Maybe it’s because I turned 30 on June 26, but I guess I’m still in the old school mentality when it comes to accepting the “art” of pro wrestling. 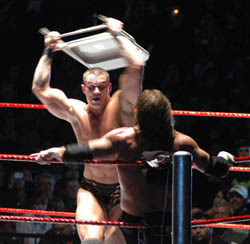 Remember when using a chair meant something? Photo by Mike Mastrandrea

And whatever happened to simple finishing maneuvers that didn’t require flips, comedic antics and poor names like the Reality Check or whatever John Morrison calls his neckbreaker? Can’t guys win with a clothesline or flying bodypress any more? And how does a handful of tights or feet/hands on the ropes give leverage?

Blood was only seen on pay-per-views and wrestlers were “good guys” or “bad guys” for stretches of years.

Where did we go wrong?

So much has changed in the 22 years I have been a wrestling fanatic, including the fact I no longer consider myself a fanatic, but more of a casual fan. I used to look forward to Saturday morning WWF Superstars of Wrestling and Sunday morning WWF Wrestling Challenge. And on the rare occasion, my parents would allow me to stay up late on Saturday and into the wee hours of Sunday morning to watch Saturday Night’s Main Event.

Wrestlers, not “Superstars” of today, like Ricky “The Dragon” Steamboat, Tito Santana, the Killer Bees, the British Bulldogs and the Ultimate Warrior played to small crowds (compared to today’s standards) and fans chanted “Go Ricky Go!” Today we get “Slut” and “A$$hole.” Nice, real nice. And forget about it if a wrestler screws up a move. They’ll hear the “You F’ed Up” chants rain down. Splendid.

Vince McMahon used to commentate the matches. Now he is the guy everyone loves to hate and makes himself the top priority of the show, even to the extent of his gong show of a million dollar giveaway promotion. He makes the federation out to be more of a business or comedy routine than the “sports entertainment” moniker suggests. Wrestlers get fired and suspended more now opposed to 15-20 years ago when they were given a lethal beating and were “out of action” for an extended period.

Some will say that WWE has changed with the times and with society and that’s probably true. But when did wrestlers stop being wrestlers and become superstars who don’t wrestle, but compete?

Nowadays, to open a pay-per-view or even Raw, the pyrotechnics are in effect throughout the arena and fans hold up signs that suggest a variety of things, mostly disgust for certain wrestlers or subliminal messages for Internet message board geeks. Go back and watch an old Coliseum Video (by the way, whatever happened to them?) of a WWF event from the 1980s and you might see five or six signs. And those were almost always in good taste and appealed to the “Hulkamaniacs.” 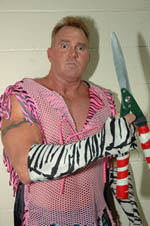 Can I just throw this out there and tell you that Brutus Beefcake’s barber gimmick was fantastic? Nothing like that any more, just 300-pound no-talent muscleheads (or 300-pound slobs) that bellow and show no microphone skills.

I feel the biggest problem with pro wrestling these days is two-fold.

First, WWE has oversaturated the market. You’ve got Raw on Monday nights, WWECW on Tuesday nights and SmackDown! on Friday nights. And each show is routine and starts and ends the same way. On Raw, for example, Wrestler A comes out, calls out wrestler B, who then gets interrupted by Wrestler C when General Manager A comes out and books the main event. After 15 minutes of scripted dialogue, we go to a commercial and come back to a women’s, er, sorry, Divas match.

ECW should be called something else (I’ve long suggested Tuesday Night Velocity), but this whole brutality of a wrestling show was covered by Matt Bishop in a previous Mat Matters epic.

SmackDown! is a darn good show, but who watches it? Friday nights are for escaping the work week, relaxing, doing something other than being a couch potato and WWE smark. But the times I’ve watched SD! in the past year or so, I’ve enjoyed it. I just wish more people would take notice.

The second problem with WWE these days is nothing is a secret due to the superb invention called the World Wide Web. Remember back when a wrestler making his or her debut was a shocker when you saw it? Or when a title change was a huge stunner and you would actually get excited? Now, just read any wrestling gossip site or dirt sheet and you pretty much have the inside scoop that goes beyond on-screen storylines.

And don’t get me started on drugs and steroids. Just take a look at most guys on the WWE roster and come up with your own opinions.

Also, does anyone use his or her own name any more? Why don’t Divas have last names? Can anyone under the age of 18 tell me what HHH, STFU and RKO actually stand for? And why do we need a pay-per-view (or two) every month? Doesn’t that pretty much water down the “Big 4” of the Royal Rumble, WrestleMania, SummerSlam and the Survivor Series?

TNA and ROH are good alternatives to WWE, but are many, many years from competing or being on the Fed’s level. Many years. Both have decent products, but it just hasn’t caught on with the diehard fans yet.

Like I said, maybe I’m stuck in the glory days of the ‘80s, but disagree with me and say that time frame was boring.

Matt Mackinder used to paint his face like the Ultimate Warrior with washable markers.