Hours before the WWE draft, Chris Jericho took time out of his day to talk to Jason Clevett and answer your questions. SLAM! Wrestling received more questions than we could possibly ask in the time we had, so here are some of the best, and Jericho’s answers. 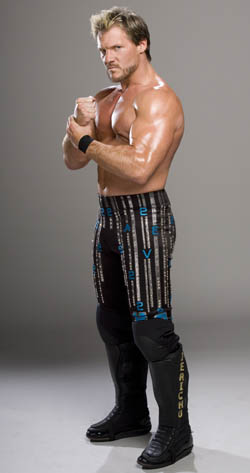 Q: Chris I’m just curious…I watched you perform with the Groundlings many times, and it looks like that experience helped you with your WWE character. Did it? Your promos with Shawn Michaels have been over the top good, and they have that improv ring to them! [Carol Clark]

A: It is kind of a reciprocal thing. The reason why I did fairly well with the Groundlings was because of my improv training on the job with WWE. That was just basic training. Will Ferrell, Lisa Kudrow, Phil Hartman, Paul Reubens, there is a list of unbelievable talents that came through the Groundlings. To work with them was the best of the best and really upped the ante for me thinking on my feet and knowing how to perform in front of a live crowd without a net. It was one of the best experiences I have had as a actor, wrestler, comedian, in terms of timing. It was a huge benefit to train with them for a year.

Q: Did the injury to Randy Orton create a situation where the WWE needed a new heel quickly? Is that why your character is making the transition? [Mike Wood]

A: This turn was in place long before Orton got hurt, there was nothing quick about it. If you look back we started this in April, it has been two months. All these things were happening with or without Orton’s injury. Obviously it opens a huge hole with Randy being hurt, so in that case it is beneficial for me, but it wasn’t like anything was rushed, it was an unfortunate thing that happened and things went on business as usual for Jericho.

A: His name is Shawn Hunter? That is hilarious. Hold number 635 is the three-handed family gredunzel with a lemon twist.

Q: What is a Gredunzel? If you don’t understand, don’t worry, he will. [Shawn Hunter]

A: You will just have to wait and see. Do you think if I told you all of my secrets I’d be as effective? Come on man!

Q: How does it feel in the locker room area now, compared to your original run in the WWE? [Frank Salemi]

A: It has changed because now I am one of the veterans there, whereas when I first came in I was one of the young guys. It has been a lot of fun since I came back. The experience level has gone down quite a bit. I was one of the young guys in age but had almost ten years of experience under my belt. Now I don’t think there are five guys that have ten years experience besides the guys like me and Hunter, Shawn, Undertaker, guys like that. It is a different world and it is kind of fun to be one of the guys who is asked for advice and help. I like to be able to do that, to have the capacity and experience to do that is a gratifying experience after all these years to be in this position of being one of the wise old owls. Yet I am only 37 and in the prime of my career so it is a good time. Part of the reason why I came back was for the young guys, to try and keep some of the different concepts and styles that I know around and alive.

Q: With the heel turn and possible alliance with Lance Cade, do you see a stable being built around you, like they have with Edge, to help push new talent and solidify you as a top heel? [Frank Salemi]

A: I don’t think I need a stable to be solidified as a top heel. I have never played well with others. I like having one guy to bounce things off of and I think Lance is a good choice for that and there is a good reason which we will find out more over the next weeks. But as far as having a bunch of guys following me around, I am not interested in that. I am too selfish for that — I want the spotlight just on me.

Q: What’s wrong with the Iron Sheik? Whenever I watch recent footage of the Iron Sheik on YouTube, ranting and raging (and lately pulling down his underwear and letting it all hang out), I often ask myself if wrestlers, like Chris Jericho, who grew up as huge wrestling fans in the ’80s, have seen the footage, and what they think of the Iron Sheik behaving the way he does. [Marshall Ward]

A: I think he behaves the way he does to get attention. I don’t think he is as crazy as you may think, he is a lot smarter than you think. It is a way for him to stay in the spotlight and quite frankly a way to make money. It is a sad thing that guys from that generation spent spent spent and didn’t have anything left on the back end. Sheik has to make $500 here and there acting crazy to try and keep himself alive. I just think it is sad that people take advantage of the fact that he obviously has substance issues and they would rather exploit that than try to actually help the guy.

Q: Do you think you’ll ever bring back any of the wild costumes like the pink suit, the black and white checks and silver outfit? [Tammy]

A: I don’t think so, I am constantly evolving and changing. That is one of the reasons why I have been able to stay on top of the business for almost 17 years. As strange as this sounds on the surface I have always considered myself to be the Madonna of wrestling. What I mean by that is she always changes her look and character and style of music but it is always Madonna at the core. I feel the same way about what Chris Jericho does. I have gone through many different looks and stages and I like that. Being on TV 52 weeks a year if you look and act the same every single week it gets boring pretty quickly. It is one of those things where I like to evolve the character and move on to the next stage of the character. As much as I enjoyed the sparkled sequined suits and checkered shirts and stuff I don’t think you will see it anymore.

Q: Do you have more creative freedom with your promos/interviews and match layout during this run with WWE as opposed to your first run? [Ryan Nation]

A: I always had creative freedom with my promos, so it has been the same all across the board. I have never been a guy who is given a piece of paper and told to read this. I have co-written all of my promos if not written them outright from when I first came in to the WWE to the promo I did last week.

Q: How difficult was it getting re-acclimatized to the all the travel and the grueling work schedule with the WWE after being away from it for the time you took off from wrestling? [Julian Saunders]

A: It wasn’t too bad because I was still keeping busy it was just more on my schedule. I was still doing a lot of traveling with Fozzy and going to Los Angeles quite a bit with acting and The Groundlings. It wasn’t that much harder to be honest with you. The reason why I left the WWE in the first place was because I was mentally burnt out and I knew I wouldn’t be back until I was ready. It took two years but I was rested and came back and was ready, it was time to get the job done and time to make the donuts. It wasn’t a problem for me because I didn’t come back half assed I came back in all the way. I knew what the schedule was. If anything it is probably a little bit easier now then it used to be because I am a little bit more taken care of then I was before as far as reservations and that stuff.