LAS VEGAS – The Cauliflower Alley Club’s Baloney Blowout held in Vegas as part of the 43rd Annual Reunion was a very special night. For the first time, the CAC paid tribute to the Mexican contribution to wrestling, honouring lucha-libre wrestlers like Pepper Gomez and Jesse Hernandez while also celebrating the efforts of famous Hispanic families like the Guerreros. 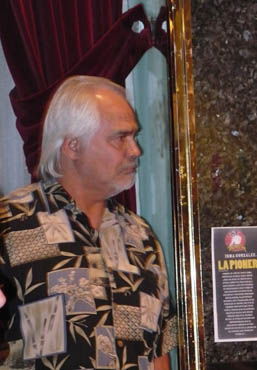 Mando Guerrero takes to the stage. Photos by Steven Johnson

The highlight of the night came when Mando Guererro, the older brother of the late Eddie Guererro, took the stage to speak and was given a long standing ovation. Mando paid tribute not only to his brother but to his entire family, pointing out that it was the combined efforts of all of the Guerreros that made that family’s legacy what it is today.

But before the Mexican tribute, CAC President Nick Bockwinkel took the stage and pointed out that the four women who had started his very first fan club nearly fifty years ago were in attendance at the event. The four women — named Karen, Beverley, Judy and Pat — were honoured by Bockwinkel who called them “both fans and friends.” It was a moving display of devotion from both sides.

Then the MC for the evening, CAC VP Karl Lauer, took the front to pay tribute to the 83 members of the CAC that had passed away in the past year. Fellow board member, Father Jason “Wolfman” Sanderson, took over and added, “Usually we would do a ten-bell salute, but I don’t really think that’s how they would want to be remembered.” Instead, he asked those in attendance to raise their glasses in a toast to the fallen members of the CAC family. “Raise a glass for them for touching all of our lives and to show our thanks that they did so.”

The mood changed a bit when Lauer took the stage again to announce that the coveted Friendship Award had now been changed to the Red Bastien Friendship Award. Bastien was asked to come on the stage to help present the award to this year’s winner, Joyce Paustian. George Schire said that Joyce was “so gracious with her time helping the wreslters and has been doing so since the age of 14. We wanted to give this award to someone who had given something back to wrestling and I am proud to say Joyce is that person.”

Paustian then took the stage, overcome with emotion. “Wow,” was all she could manage. “I am blown away by this. This means so much, thank you.”

Then it was time to present the James C. Melby Award to this year’s winner, historian and author Scott Teal. Introducing Teal, Schire affectionately called him “The J.K. Rowling of pro wrestling.” Melby was gracious in his acceptance saying, “I never wanted to be a wrestler, a referee or a manager; I never had an interest in the limelight of this business. I just wanted to know what happened in the past.” Rather than take credit for the vast information that is known about the sport’s past, Teal elected to thank the contributions of other wrestling writers and historians, including Kurt Brown and SLAM! Wrestling’s Greg Oliver and Steve Johnson. “It’s because of them that we have some of that lost history,” Teal said.

Directly before the tribute to the Mexicans began, Karl Lauer related the story of his recent stop to Jim Ross’ Barbeque Ranch in Oklahoma. He then asked Ross, in attendance for the event, to stand “so we can all see what a real cook looks like.” Lauer also gave some props to J.R.’s friend, Steve Austin, who was sitting adjacent to him. “I’ve known Steve for many years,” Lauer said, “ever since he wrestled for us in California. Back then, he had beautiful, long blonde hair and thought he was quite the sex symbol. That was before he turned into a bone-headed rattlesnake.” The audience laughed and applauded.

Then Dr. Mike Lano, the man largely responsible for putting on the Mexican tribute, took the stage. Explaining his rationale for wanting the tribute in the first place, Lano said, “Since 1982 I’ve been bugging the Cauliflower Alley Club to have more represenatation for the young hispanic and Lucha guys. I really wanted to honour the history of Mexican wrestling. Everyone knows how influentail Lucha Libre has been and I wanted to pay tribute to some of the boys that have made it that way.”

One of those men was the late Pepper Gomez, the first Mexican mentioned by Lano. Pepper’s family were present and were called up to the stage. Pepper’s neice was grateful for the recognition and said, “My uncle used to make us call him ‘Good-Looking Uncle Pepper’ wherever he went. He loved this business; it was his life. He instilled some of that love and passion for it in us. We love you Good-Looking Uncle Pepper.”

Another man honoured was trainer Jesse Hernandez, a man Lano said had “done everything.” Hernandez was short on words. “I am so proud to be part of this business,” he told the audience. “And I am proud to be here with all of you legends.”

Eddie’s brother, Mando, was up next and when the crowd finished their standing ovation, he spoke passionately about the role his family played in shaping the wrestling business. “Ours is a truly American story,” he told a captivated audience. “We were immigrants and we came to the U.S. to find our pot of gold – and it was wrestling.”

He made particular mention of his mother and sisters and suggested that they had too often been overlooked. “Where did my mother and my sisters come in?” he asked. “People know Hector, Chavo and Eddie, but what about behind the ring? Our family lived this business. My mother worked 16 hours a day some days just to keep our wrestling promotion alive. Eddie was just a baby back then, and some people would say, ‘you can’t keep your baby up that late’ but we did. Our whole family was involved and, as you can see, we still are.”

Mando paid homage to the Mexican style of wrestling. “Lucha Libre is like a ballet. We don’t just fly for no reason. We can’t fly if there is no catcher. The catching is important but that’s being lost today. It’s more about individual performers now than the performance in the ring. We’ve lost that connection between the two wrestlers. In our sport, people shoot themselves out there and people catch them – that’s the magic of Lucha Libre.”

“Our family has passed through everything,” Mando continued. “We’ve gone through the good, the bad and the ugly. The bad was a few years ago we lost our baby brother. Eddie was the cream of the crop, he really was.” When the crowd burst into another round of applause, Mando added, “I hoped you enjoyed him as much as we did. He was not happy unless he was in a ring. When he stepped between those ropes, he was home.”

Another standing ovation was then given for Mando and his family as the evening came to its conclusion. Some stories had been shared, some tears had been shed and wrestlers and their families were properly commemorated. If the late Eddie Guerrero had found his home inside the squared circle, then the CAC membership had found theirs too. And they shared it with the Mexicans.