In awe at my first Cauliflower Alley Club reunion

LAS VEGAS – Paul Vachon calls to me and thrusts a Polaroid picture into my hand. “Guess who the kid is,” he says to me. I take the Polaroid and stare at it. It’s a picture of a Paul “the Butcher” Vachon which looks to have been taken 20 or so years ago, back when he was actively wrestling. On his lap sits a kid about five or six years old, smiling away. 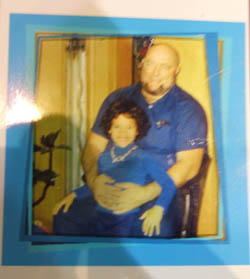 Paul Vachon and a young Rock.

So begins my very first adventure at the annual Cauliflower Alley Club Reunion. The 43rd annual reunion is being held in Las Vegas this year and I have been sent to cover the event for SLAM! Wrestling. It’s the first time I have ever been and so I am not sure what to expect. When I arrive at the Rivieria Hotel, where the event is being featured, I walk into a convention room filled with wrestling memorabilia — and wrestlers. It’s the official Memorabilia Fair, open to the public and many wrestlers are there not only selling off their wares, but chatting with fans and friends as well.

As I get my bearings in the room, I spot Harley Race coming towards me. Everyone is shaking his hand and asking for pictures. He is gracious throughout and does not deny a single request for a photo or an autograph. He’s just recently come off of hip surgery, so he walks gingerly, but the wrestling legend is beaming as he makes his way towards me — it’s clear he loves this intimate interaction.

I extend my hand and tell him it’s an honour to meet him. He graciously takes my hand and thanks me for coming. I am about to ask him a question when I bump into someone behind me. I turn to apologize and look right into the eyes of Terry Funk, who is looking past me to his friend Harley Race. Race whoops when he sees his friend and the two hug warmly.

Where else in the world can you be speaking to Harley Race one moment and then accidentally bump into Terry Funk? I can’t believe this. I step back so Harley and Terry can speak and notice Pat Patterson and “Dr. Death” Steve Williams having a conversation at the other end of the room. It’s almost surreal.

But then the first time is always like that. Or so I am learning. I spoke with several CAC members that first day and they all told me they could not believe how awesome the annual reunion was. They all shared in the excitement in meeting friends they had not seen in years or meeting people whose careers they had followed for nearly a lifetime. One CAC member told me, “This is the greatest time of year for me.”

One person likely to echo that sentiment is J.J. Dillon. The 2008 CAC Reunion is only his third — after years of procrastination, he finally decided back in 2005 to come to one the Reunions. Now, he can’t stop coming.

“The only regret I have about coming here is that I didn’t come more often earlier,” Dillon says from behind his merchandise table. Dillon adds that he had always wanted to come but for one reason or another, simply didn’t. “You get the email saying come to the Reunion and you circle the date on the calendar but when you remember to check it, the Reunion has already happened so you say, ‘Ill go next year.’ I don’t put it off anymore.”

J.J. likes the atmosphere of the reunion and the camaraderie that exists between old friends. But besides being an integral part of the business, he’s a fan too. One of his favourite pastimes at the Reunions is to look at the pictures that are all around him. “I could look at these old wrestling pictures all day,” he says happily. “I never get tired of that.”

Terry Funk was a latecomer to the annual CAC Reunions as well. He has only been a few times to the reunions in Vegas and like J.J., wishes he had come sooner. One of the event organizers comes up and thanks Funk for “all the years you have given us.” Funk thanks the man politely who then responds, “It’s too bad it took so long for you to find us.” Funk shakes his head knowingly and says, “Yes, I know; you’re right.”

I buy one of Funk’s books and snap a couple of photos, which reminds of me of Vachon’s Polaroid of The Rock. The photo was taken in either 1976 or 1982 — Paul Vachon can’t remember which. It was taken in Allentown, Pennsylvania, back when there was a wrestling T.V. show in that town. The Rock’s father, the great Rocky Johnson, was wrestling on that show with Vachon — that’s how the photo was taken.

Vachon remembers The Rock as a happy kid. “He was alwyas smiling, just like he does now,” Paul recalls, looking at the photo. It’s an amazing, historic picture and so few people will ever get the chance to see it. This is the magic of the CAC Reunion I come to understand. Sure, there are wrestling events held all over the world every day, but what can match the intimate and timeless environment of the Cauliflower Alley Club Reunion?

Still pondering this thought, my elbow is tapped. I turn to see who it is and see that Terry Funk is looking at me. “Hey Fred,” he says, somehow remembering my name, “thanks for buying my book.” He turns to leave then, heading out of the room to see another old friend, leaving me there trying to fathom what has just taken place. Funk, a legend in wrestling who paved the way for so many and made so many personal sacrifices himself, just made a point to specifically come over and thank me for buying his book which I really, really wanted. I repeat the thought in my head to make sure I understand it. Terry Funk thanked me.

How cool is that?