LAS VEGAS – The 43rd Annual Cauliflower Alley Club Reunion came to an end Wednesday night with their traditional Awards Banquet. It was a historic night for the CAC; not only were men like Jim Ross and “Stone Cold” Steve Austin in attendance for the first time, but Bret Hart and his father Stu became the only father and son duo to both win the prestigious Iron Mike Mazurki award. 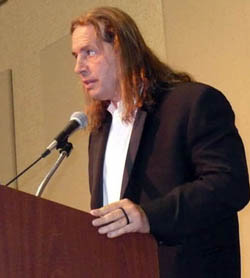 Bret “Hitman” Hart at the podium. Photos by Steven Johnson

Calling it the “biggest honour I have ever had,” the Hitman took to the stage at the Riviera Hotel Convention Centre to the sound of a rousing standing ovation to receive the award. The Iron Mike Mazurki Award recognizes not just greatness in wrestling, but in other areas as well. Hart’s recovery from a debilitating stroke and work on the musical Aladdin more than qualified him for the award. He told the crowd he had actually met Mike Mazurki once when he was just a teenager working the doors at his father’s shows.

“Just to have met Iron Mike was reward enough,” Hart said. “But being here tonight is meaningful for me because this award is coming from my peers, from those people that educated me about wrestling. I owe so much to so many people here in this room.” He acknowledged some of those very people — men like Harley Race, who he affectionately referred to as “Uncle Harley.” He also had some kind words for his WWE brethren, Jim Ross and Steve Austin. “I wish Steve and I had had the opportunity to tell some more stories,” he added.

Bret mentioned the impact the sport continued to have on him. “I owe everything I am to wrestling and all the people in it. Wrestling was my family’s life and to a certain degree, it always will be.”

He acknowledged the sacrifice he and his family had made and stated his belief that some of those sacrifices may have been unnecessary. “I feel strongly that there are some wrestlers that should still be here,” he said, referring to some of the wrestlers who have recently passed away. But then he quickly added, “The one thing I learned from wrestling is that you never know what worse luck your bad luck saved you from.” He again stated how honoured he was to receive the award and concluded his speech by saying, “I will do my best to live up to your expectations and be perfectly satisfied with absolutely nothing.”

That’s how the night ended, but it began with emcee J.J. Dillon thanking everyone for attending the banquet. “I hear the economy is bad,” he joked, “but you wouldn’t know it from all the people that are here that have come from all over.” He then quickly began the historic awards ceremony, starting with the Future Legend award, which went to a young man named Ricky Landell, who has recently been profiled in Wrestler and Inside Wrestling magazines. Landell graciously received the award and thanked mentor and trainer Steve Corino for urging him to join the CAC.

The late Orville Brown received the Posthumous award and Betty Niccoli was given the 2008 Ladies Award. Niccoli fought to have female wrestlers licensed for wrestling in the state of New York, a battle she would eventually win, though she never got to compete in New York State herself. Niccoli was also recently inducted into the Pro Wrestling Hall of Fame at a ceremony that took place in May 2008. Accepting the award, Niccoli beamed, “I never thought I would be honoured twice in three weeks, let alone three lifetimes.”

Paul “The Butcher” Vachon was up next to be given a Men’s Wrestling Award. During his speech that was cut a little short due to time, Paul said, “Pro wrestling is the greatest sport in the world.” The audience agreed with their applause. He continued: “I’ve wrestled over 6,000 matches in 33 different countries and there is no place in the world I would rather be than right here, right now.” He ended his speech with a modified quote from General Douglas MacArthur who once said, “Old soldiers never die; they just fade away.” Vachon’s modification was, “Old wrestlers never die, they just join the Cauliflower Alley Club.”

The Guerrero family was honoured next and given the Special Recognition Award. Mando Guerrero spoke at length about his family’s contribution to wrestling and offered a cute story about his late brother, Eddie. Once, in the locker room, Gene Kiniski and Dory Funk Jr. were arguing over a match. While this argument was taking place, Eddie Guerrero was sitting between them, lacing their boots up. “That tells you about his spirit,” Mando said of his brother. He thanked the CAC for honouring his family adding, “We will entertain you in professional wrestling for as long as we can.”

Ronnie Garvin was up next with another Men’s Wrestling Award. He lamented he should have joined the CAC a long time ago. “I am honoured to have this award,” he said, “and I am so fortunate to have such a great life. I am healthy, have a lot of good friends, many of whom are in this room tonight and are greats in this business. Thank you so much.”

CAC President Nick Bockwinkel took the stage to give the International Award to Haruka Eigen, a founding member of the NOAH promotion. Addressing the crowd, Eigen paid tribute to friend Harley Race. “I have known him for 40 years now,” Eigen said in Japanese. “He gave me heat during the matches and gave me heat when I was playing golf. He is my best friend.” Harley was clearly moved.

Jim Ross took the stage to present the Lou Thesz Award to “Dr. Death” Steve Williams, a cancer survivor. Calling Thesz the “Babe Ruth of wrestling,” Ross said it was fitting that Williams had won the award. “It’s an amazing accomplishment for a guy that was as tough as they come.” Providing an example of Steve’s toughness, Ross told the story of a match Williams had with Brad Armstrong in which he sustained a cut above his eye that required 108 stitches. “He had to wrestle the next night,” Ross recalled, “so he drove all the way to Houston and wrestled in a cage match with 108 stitches in his head. He’s a tough son of a gun and just a wonderful human being.”

To a standing ovation, Williams came up to accept the award. “I gotta tell you,” he began, “throughout this cancer battle, you fans and friends have been wonderful. This is my family. I appreciate you all coming. The best time of my life is right now. Thank you all so very much.” 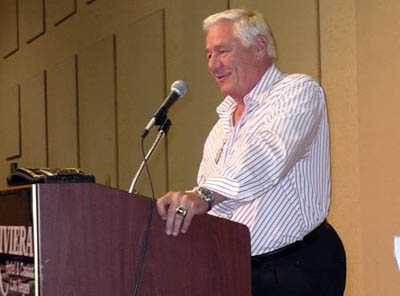 An even louder ovation came next for Pat Patterson, who received the Art Abrams Lifetime Achievement Award. Standing at the podium with the award in his hand, Patterson said, “How I got here, I have no clue.” He recalled being part of a dirt poor family in Montreal whose future looked bleak. A long-standing lover of wrestling, Patterson, then barely an adult, realized he would have to leave Canada for the U.S. if he was to be successful in wrestling. (Or so he thought.)

“So I borrowed $20 from my sister, a suitcase from a friend and went to Boston where I didn’t speak one word of English. I got booked in Boston and have never been home since and now here I am. I guess the reason I am here is that I loved the business so much and I still love it.” He then traced his personal history back to when he became part of the WWF/E office where he would constantly play ribs on Vince. “He would tell me to stop, but I would never listen.”

But the crowd at the CAC Reunion listened to him, as he spoke passionately for about 15 minutes. When he was finished, another long standing ovation was given and Patterson was touched by the gesture. Then he took his seat next to men like Bret Hart, Ronnie Garvin, Paul Vachon, Mando Guerrero, Haruka Eigen, Steve Williams and a passionate woman named Betty Niccoli. The Reunion was over for these giants of wrestling, but thanks to the Cauliflower Alley Club, their legacies are now immortal.