Boo and cheer who you want, Canada, says Jim Ross

It’s another Monday night spent away from home for WWE announcer Jim Ross, another few points in the travel rewards program. But this coming week, as Monday Night Raw broadcasts live from Toronto’s Air Canada Centre, things will be a little more unpredictable than normal. And that’s good. 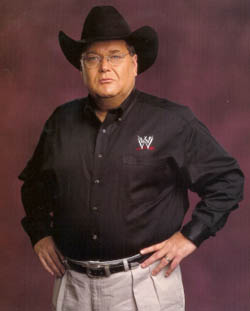 In the past, Canada was dubbed “Bizzaroland” for its fans wouldn’t boo and cheer as instructed. So what, said Ross.

“I don’t know who’s going to be booed and who’s going to be cheered, and I don’t care, it doesn’t matter,” Ross recently told SLAM! Wrestling. “The old promoter’s theory is, as long as there is a rear end every 18 inches, it’s irrelevant. I know whomever the fans choose to support is going to be loud and enthusiastic. I think that makes the whole process so much better, the presentation is perceived so much better, everybody raises their game because the fans are emotionally invested in the product — and Canadian fans do that.”

A native of Oklahoma, Ross claims to never have had a bad experience while in Canada.

“I’ve got great memories of Canada. Even going to the Dungeon and having long talks with Stu [Hart]. Knowing Bob Holliday in Winnipeg. The success that we’ve had in Toronto with WrestleManias, and Monday Night Raws, SkyDome experiences,” he said. “I don’t have any — and I’m not saying it to suck up to you — of all the places that we travel that are outside the boundaries of the United States, I’d much rather go to Canada; not just because it’s not that extensive a flight, but you get there and you feel comfortable, you feel at home, you feel welcomed, you feel like you’re the neighbour that came over for dinner and you’re welcome there. It’s always a real positive thing for me. And the fans, we haven’t been up there in quite some time.”

In fact, this Canadian tour hardly touches half the country, with the Raw and Smackdown crews split up to hit Moncton, Fredericton and Saint John, New Brunswick; Montreal, Quebec; and Barrie, Hamilton, London and Toronto, Ontario. A western tour has long been rumoured for this fall — the last scheduled swing in July 2007 having been cancelled in response to the Edmonton-native Chris Benoit double murder suicide in late June.

Ross is definitely a positive person, and happily shares memories from the past in Canada. “It’s always an unique audience. One of the most memorable night I’ve ever had in my career was when The Rock wrestled Hogan [at WrestleMania 18]. The whole thing was an amazing experience. And then, if my memory serves me correctly, the next night Hogan was in Montreal, and that was overwhelming. It was tremendous.

“Some of my best experiences, most memorable experiences, have been in Canada. I was fortunate to sign some very good Canadian kids that helped them facilitate their dreams. Edge is a prime example.”

With a restaurant to run back home in Norman, Oklahoma, a wife, two daughters and two grandkids to see on occasion, as well as responsibilities to WWE outside of broadcasting, Ross is a man with a lot of demands on his time. “I’ve always seemed to stay busy, and I like being busy,” he admitted.

Ross usually leaves Sundays for wherever his destination may be, with Saturday departures the norm for overseas broadcasts. He generally gets back home on Tuesdays.

Like anyone who travels a lot, the airport security can be a real grind, and it is heightened with customs departments in each new country.

“I think when that becomes THE issue, of going and dragging yourself to the airport to pull yourself on a plane, to go through the security issues, like when we come to Canada, we go through Customs,” the 56-year-old Ross mused, alluding to an eventual retirement in the far future. “I think my retirement and my leaving the air or the WWE is been much overstated, because I don’t have any timetable,” he said, explaining that he wants to get out before his work suffers. “I don’t want my legacy to be, ‘Well, he was pretty good at one time.'”

The customs employees mean well, he knows, but can be a drag as well. “Even though people know who you are, they ask you the same questions — they’re just doing their job. Sometimes, some of those issues get a little bit overbearing, not overwhelming, but overbearing. If a Customs guy takes you into a room like you are a suspicious character, and then they make you wait, and you hang around. Then they want you to sign autographs for them. You wonder, I would have been happy to sign the autographs — that’s not an issue, it’s never been an issue; but if you’re upfront and you say, ‘Would you mind? My sons are fans. I’m a fan.’ Whatever. No problem. But that gets a little bit overbearing at times.”

In short, to use the terminology of his favourite sport of football, pro wrestling never has an off-season, and since Ross has been involved in pro wrestling since 1974, having graduated high school just four years prior to that, he’s never worked in a business where there has been an off-season.

Time on the road is a hassle, but it’s also a chance to get some work done in the quiet of a hotel room, or on a plane.

Ross keeps a little yellow notepad with him that he writes topics and subjects down on for his popular blog at jrsbarbq.com. He’s always on the lookout for what are people are talking about.

He also writes a column for WWE.com.

But the big task that eats into his time is his position helping with the talent payroll, coordinating that aspect of the Talent Relations department. “That’s a weekly deal, because each event creates its own payroll, and the payroll has to be processed and the performers have to be paid. So that’s a neverending function that I perform,” he said, admitting that “a lot of weekends are spent working on payroll.”

Still, he loves being ringside, calling the matches and trading banter with “The King” Jerry Lawler. He’s been doing it a long time, after all. But that doesn’t mean he doesn’t believe that he can’t improve.

“In my role, I’ve never looked — at any point in my career — where I felt that I had gone as high as I could go,” he said. “I always felt like there was more to learn. I certainly believe, and it’s true to this day, that I can get better at what I do. I approach every Monday night with that in the front of my mind.”