The crack of a bat, the sound of ball meeting leather, and the cheering of fans. Yes, ladies and gentlemen, it is baseball season once again. Other than the odd ringside seat crowd camera shot, or brief storyline involvement, most sport fans would not commonly associate baseball with pro wrestling. But that’s probably because you don’t know about Art “The Great” Shires. 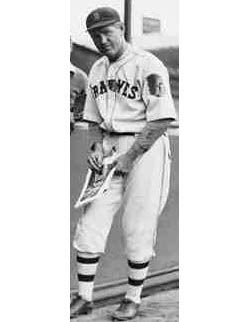 Breaking into the majors during baseball’s golden era of the late 1920s, Art Shires’ reputation for being a character on and off the field had followed him up from the minor leagues. Born August 13, 1907, the brash first baseman seemed to be a born heel with his headline grabbing remarks, disdain for authority, and publicity stunts.

A perfect example comes from the 1967 Associated Press (AP) article recapping Shires’ self-thrown homecoming parade following the end of his inaugural big league season in 1928 with the Chicago White Sox. “He hired an entire band when he got off the train in Dallas to make the 30 mile trip to his current residence of Waxahachie (Texas). Shires had signs painted proclaiming ‘The Great Shires’ … he staged his own parade down Main Street,” read the story.

Coined as baseball’s “bad boy” of the 1920s, Shires’ flamboyant comments to reporters and fans seem to mirror that of a cocky Ric Flair promo rather than the typical bland athletic rhetoric. For example, a fan once hurled an insult down from the bleachers to Art “The Great” during an exhibition game. The 1934 International News Service article recorded the incident, “Halting stockstill, Shires turned on his heel, grinned and doffed his cap. ‘Sonny, if you want to talk to me, you’ll have to buy a higher-priced seat.'”

Shires’ remarks to White Sox teammate Ted Lyons, after going 4 for 5 at the plate in his first major league game, seemed to also foreshadow his future involvement in sports entertainment. “So this is the great American League we heard so much about down in Texas … I’ll hit .400,” recapped the 1967 AP piece. Shires did not reach his .400 prediction, but still hit an impressive .341, and ended up with an overall average of .291 during his injury shortened four-year baseball career.

The 6-foot-1, 190-pound first baseman’s temper was well documented and quite often landed him on the front page of the sports section. One such instance was in his second season with the White Sox. Shires was getting into daily arguments with manager Lena Blackburne; and when things finally came to a head, Blackburne found himself with a black eye courtesy of “The Great.” It was a “punch heard around the nation in 1929.” Due to the consistent squabbles with management Shires was traded to the Washington Senators mid-way through the 1930 campaign.

However, when the self-dubbed “What-a-Man” finally did get involved with pro wrestling around 1934, it was not the first time he had stepped into a ring. Shires made some extra cash, and additional headlines, by moonlighting as a boxer when he was not on the baseball field. WrestlingClassics.com confirms that his heavyweight pugilistic record stands at 5 wins (all by KO) and 2 losses beginning in 1929.

One of those losses, in December 1929, came against George Trafton in Chicago. The United Press wire story took great glea in mocking the loser. “Shires told everybody about his greatness, with a sign on his red bathrobe which said, ‘Art, the Great Shires.’ In case anybody couldn’t see that sign, the Great Art had similar notices on the backs of his two seconds,” it jabbed.

According to baseball historian Ron Coons of www.findagrave.com, the outlandish first baseman took on some ex-football players, and even had a bout set up with Hack Wilson of the rival Chicago Cubs, before Wilson backed out. He also bragged of how much money he made with his fists, apparently owning over 50 suits and 100 hats! He was suspended several times by the commissioner of major league baseball, Kenesaw Mountain Landis, for his participation in the sweet science, before Landis put an end to Shires’ boxing days in 1930 by prohibiting any ballplayer from appearing as a fighter. Shires did have two final bouts in 1935 once his major league days were over.

Boxing was not his only sideline either.

“One of the remarkable things about me is my versatility. Baseball, football, basketball, boxing, wrestling, ice hockey, tennis and golf all are pretty much the same,” Shires bragged to the Sheboygan Press in February 1931, headed to town for play in a couple of semi-pro basketball games.

“With the Hon. Mr. Shires, we might say basketball is an athletic art, just like baseball, and boxing, and motion picture acting,” recounted the same article. “Interviewing Mr. Shires entails no great difficulty. You merely inform your local operator to place a call for Arthur Shires, North America, and you shortly find yourself connected with the Great One himself. The care must be exercised, however, never to disturb the celebrated athlete before noon, his entire morning being given over to rest from his herculean labors.”

Injuries would eventually catch up with Shires, and it was one to his knee that ended his final baseball season in 1932 while with the Boston Braves. He attempted to work his way back up to the big time with the minor league Toledo Mudhens, but his heart was never fully into it.

In 1934, Shires casually dropped the bombshell on reporters that he was joining what he called “the grunt game” and leaving baseball.

“No more unpaid slugging exhibitions, being on the diamond, and invasions of the prize ring,” he said. “The money, I’m told, is meaty in the wrestling ring, and if you’re good, you don’t take an awful lot of punishment.”

When a journalist asked if he was any good, “The Great” scowled and cut a masterful heel promo, showing that he was definitely ready for the showmanship side of the sports entertainment industry. “Good? I’ll tell the world I’m good. I can do anything. Look at my record — baseball, prize fighting, insurance; about the only thing I haven’t done is write my memoirs. And I think I’ll get around to that one of these days”.

Similar to other sport stars like Jack Dempsey or Babe Ruth, Shires began his involvement in professional wrestling as a celebrity referee in 1934. He grabbed immediate headlines with his bad guy officiating duties across several territories in America.

“Stewart went after Little Wolf, with Shires looking on like a cigar store Indian, and strangled the noble Indian with a towel while the referee appeared to be busy keeping the flies of Stewart’s back,” recapped Frank Rogers of the Ventura Star-Free Press in 1938 after a show. “Shires, who had been busy all evening keeping Little Wolf from hurting Stewart, found it easy to declare Stewart the winner.”

Shires became more involved in actually stepping into the ring as a competitor, rather than an official, in the latter part of 1938 and most of 1939. The Italy, Texas, native fought all over the country, frequenting San Francisco and Texas on a regular basis. More often than not the flamboyant ballplayer came up on the short end of the stick, and stuck mostly to the mid-card level where he battled the likes of oldtimers Ivan Managoff and Stan Mayslack. However, his antagonizing of the spectators and their favourites, kept the public buying tickets to see Art “The Great” get his bell rung by the local stars.

In 1941, Shires claimed to the Abilene (TX) Reporter-News that he could still be a pro baseball player if he wanted. “Yep, I possibly should still be up there, but I have no regrets. I’m making plenty of money in the wrestling game and I like it better than any other.”

By 1948 Shires had drifted from the spotlight, until a life changing occurrence thrust him back onto front page news. Charles Arthur Shires was getting ready to face his next opponent — a state of Texas courtroom. Unfortunately Shires’ tendencies towards violence spilled over from the sports world and into real life, where he was being charged for allegedly beating a man to death. The victim was former catcher for Dallas of the Texas League, William Hiram Erwin. “Erwin and Shires fought after drinking together, testimony at the trial showed,” AP reported. A lengthy legal battle ensued, but by 1950 he was able to escape with a lesser conviction, “a six-man jury found Shires guilty of aggravated assault … he was fined $25 in the death.”

With a nasty divorce and murder trial behind him the former slugger faded off into the sunset and helped to manage a small restaurant in his hometown that specialized in steaks and shrimp. Shires lived out his remaining days in relative quiet until his rather premature expiry on July 13, 1967. An AP clipping the day after his death may have summed up this remarkable personality best: “The brash Texan who became a national figure in the late 1920s with his booming bat, ready fists and flair for showmanship.” Shires died of lung cancer at the age of 60.

Whether it was on the baseball diamond, the boxing ring, or wrestling’s squared circle, Shires always provided an entertaining and often outrageous atmosphere for whomever was paying attention. Love him, hate him, cheer or jeer him, one thing was for certain — no one from that generation would ever forget the name Art “The Great” Shires.

More detailed statistics on Art Shires’ baseball career can be found at Baseball-Reference.com