Rebuilding The Sheik shoot a classic

Kayfabe Commentaries has an extensive collection of shoot interviews and SLAM! Wrestling has been fortunate to get their hands on several. First up is YouTube cult hero, the Iron Sheik. Yes, he will humble you. He even has the T-shirt to prove it.

Anything with the Sheik in it is worth having and Rebuilding The Sheik is definitely in this group. Yes, he covers his dislike for B. Brian Blair. A lot. Though at times, he looks at his manager Eric Simms and you kind of get the impression the hate isn’t all it’s cracked up to be. Maybe not. You be the judge. 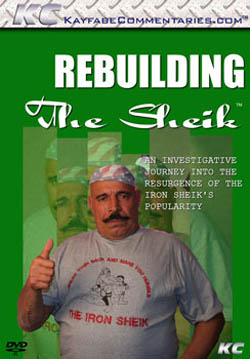 The Sheik talks about many topics, including money. He mentions he’s not a millionaire now, he’s broke, but he’s not poor. Huh? Instances like this are rampant throughout this DVD that leave the viewer scratching their head.

One portion of the DVD is where Sheik shoots on Vince McMahon, but says he can thank Vince for keeping him on top of the then-WWF back in the 1980s and helped him make a decent living. Simms chimes in and says some of what people say about Vince is just for the marks and it’s different behind closed doors.

Sheik going on the Howard Stern Show is touched on and Simms and Sheik both kiss a bit of Stern booty. Then they go off on a tangent and rip Bubba the Love Sponge, or as Sheik calls him, “Booba the Loova Sponja.” An expletive-laden tirade follows and Sheik says that even at 65 years old, he’ll beat the (bleep) out of him. He then calls him a “stinky boy.”

Artie Lange is also called out by the Sheik and Simms as is Hulk Hogan, simply for being the best man at Bubba’s wedding.

The expletive count for this DVD is huge. Keep this DVD away from kids, please.

The Ultimate Warrior situation also gets brought up by Simms and the Sheik. Apparently, there was a football convention some place. The Sheik and Warrior had a heated exchange and we get Sheik’s side through Simms’ commentary. Simms said there was a memo sent out that no one was to approach the Warrior, but he didn’t get the memo. Simms said he was slapped by the Sheik for taking him over to see the Warrior and says he could have retaliated and knocked the Sheik out. Try not to laugh at this point, people.

The issue of drugs in wrestling gets bandied about and Simms talks about how to get drugs and hits on a previous shoot interview where a call was made to a drug dealer. Simms says everything relating to the Sheik gets videotaped because when he’s dead and gone, the footage will be worth something. Sure, $10 a DVD sounds about right.

This shoot interview is a classic, but then again, most of the present-day Sheik material is. Like him or think he’s a ridiculous human being, he is entertaining if nothing else. And that comes with swear words galore.

Basically, pick this DVD up from Kayfabe Commentaries if you want to laugh a couple times a minute, or if you forgot how to curse and want to be refreshed.