A 1973 issue of The Wrestler contains the headline, “Sandy’s Always Got Somethin’ Up Her Sleeve.” 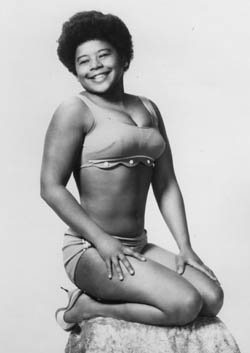 Sandy Parker in a publicity still. – Courtesy of the Wrestling Revue Archives: www.wrestlingrevue.com

But instead of implying that she is sly, a more accurate description of Canadian grappler Sandy Parker would have to be that she is just plain blunt. You won’t find any nonsense here.

Upon some introductory questions, Parker matter-of-factly explains that of course Sandy Parker is her real name. She says she tried wrestling under a different name once, but was disgruntled when she was not able to cash her cheque after the match. The cheque was under her wrestling name and naturally all her identification had her real name. That put an end to that, she says.

Parker was born in Vancouver and raised by her grandparents. “When I came along she (her mother) left me with my grandmother because I guess she didn’t want to take care of me,” reveals Parker. “You know how that goes.”

A self declared “tom boy,” Parker remembers enjoying baseball, beating up the local boys and climbing trees. But her real love was wrestling. It only took attending one live wrestling event to get her hooked.

Parker became a wrestling regular, attending every Monday event and then every Wednesday event and then every Friday. She even made the trek to Seattle once a month. During one of the shows, Parker remembers a friend telling her during a Judy Grable match, “Sandy, you could do that.” Parker agreed, deciding at that moment to become a wrestler. Standing at only 5’2″, Parker’s family was naturally concerned about her chances of succeeding in the profession, but she would not be deterred.

After sending several letters to various gymnasiums requesting training, Parker finally received a response from Lou Klein in Michigan, which was fortunate, because Parker was living in Windsor, Ontario at the time. She wanted to train so bad that she took the bus three times a week to Allen Park, Michigan, a suburb southwest of Detroit. 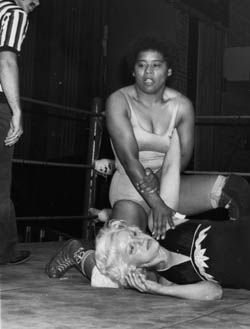 Parker says her training consisted of learning how to fall and apply some basic wrestling holds. Veterans Mary Jane Mull and Lucille Dupree were her trainers.

Dupree recalls that she and her trainee often went down to the local roller skating rink during their down time.

“I got along real good with Sandy,” says Dupree.

Parker made her debut in the early ‘70s and was advised that if she wanted to go farther in the business she should seek out Lillian Ellison, better known as The Fabulous Moolah. Parker took the advice and went down to South Carolina, likening the experience to “a camp for women wrestlers.”

Parker does not mince words when it comes to discussing the late Ellison’s business manner.

The experience was a positive one at first. She says Ellison was very attentive and encouraging about her career and the trailers on Ellison’s property that provided accommodation for the women were pretty good. But Parker’s outlook changed after six or seven months. She felt ripped off by the fact that Ellison, not the women themselves, would receive their wrestling cheques first, she would then take her cut and only then pass the remaining funds on to the women. Opportunities were also granted to those who were on Ellison’s good side.

“Everybody knew that if you weren’t on Lillian’s good side, you got crappy bookings,” comments Parker. “I wasn’t on her good side because I wouldn’t do what she wanted me to do. That was one of the reasons I never worked Madison Square Garden because every time the bookings came up, I’d be on her bad side. As far as I am concerned I could wrestle just as good as Toni Rose, Donna Christenello or anyone of those girls (who were on Ellison’s good side).”

Parker says that Ellison also interfered with her personal life. Despite Ellison’s knowledge that Parker was gay she often suggested to her that she should go out with one of her nephews. As part of her number of rules, Ellison also told Parker she was not to go to any gay bars. These tactics enraged Parker.

“Lillian was two faced because she had her own little dalliances that we all knew about,” alleges Parker.

Not able to take the strict rules any more, Parker left to go work for Mildred Burke. But despite her negative personal views towards Ellison, she gives her credit to her wrestling abilities.

“The woman was perfect in the ring,” says Parker adding she did have the opportunity to face Ellison in the ring. “I saw her one time, some (fan) was yelling ‘fake’ and ‘phony’ and she invited him up. He got on the apron and she grabbed him by the hair and bopped him so bad, he fell into the first row.”

Despite any misgiving with Ellison, Parker has fond memories of her time in the ring. She especially enjoyed playing heel, but as a black woman she was often in the role of a babyface. Promoters were just too fearful of fans getting out of control if she wrestled as a heel. Parker says her best matches were with Betty Nicoli, who she credits as being a great worker and says their matches would go off without a hitch.

“Whenever you have a good match it is because the other person is good,” she offers. “When you have two people who know what they are doing, you have a great match, people actually believe what is going on.”

Traveling to her matches was also a positive, and often hilarious experience, for Parker. She can barely contain her laughter as she recalls traveling to New Orleans for a show with Rose. During their flight, Rose pointed out an ad in a magazine for a local bar showcasing a beverage called “Hurricanes.” Rose was adamant that the two had to have one. Being that the show wasn’t until later in the evening Parker agreed they could go to the bar when they landed. At the bar, Parker remembers the drink being somewhat fruity, but basically “pure alcohol.” She was fine with having just one. But Rose noticed another female patron had three empty “Hurricane” glasses in front of her and she did not want to be out done. Rose insisted they have more. Parker says she doesn’t remember much after that.

The two made it to the wrestling show, albeit they had to crawl most of the way. The next thing Parker says she remembers is being in the dressing room after the match and the promoter coming up and telling them how great they did. Parker chuckles admitting she has no recollection of the match.

“That made me think,” she gets out between her giggles. “If you know what you are doing and you’ve done it so long and you’re good at it, you can do it without even knowing you are doing it. And that’s what happened. She and I had a good match and we were both loaded. That proves we were good wrestlers. But I never ever drank again before a match.”

During her career, Parker held the World Women’s Wrestling Association singles title and was a six-time tag team champion. She left the business around 1986. She was able to find work as a bartender and store manager. Currently 62 years of age, Parker now works as a security guard in Las Vegas; the United States has been her home for the last 35 years.

Looking back on her career she says everything was worth it, the injuries she sustained, her dealings with Ellison. It was the best time of her life, she says, and she still gets excited when she thinks of really good wrestling.

But today’s wrestling leaves her cold. As far as she is concerned Vince McMahon ruined wrestling and he did it all for financial gain.

“As far as I’m concerned wrestling is crap now,” she spats. “I give the guys credit for some of the things they do, some of the high spots and the falls, but I do not give them credit for the stupid storylines that they have.”

Parker finds solace and like minds as a member of the Cauliflower Alley Club, an organization dedicated to preserving wrestling history and fellowship. She considers the CAC to be one giant family, one where everyone truly understands the lifestyle and addiction of the wrestling business. The club named Parker as an honoree at its reunion in 2004.