Luis Magana, who recently passed away Easter Sunday, March 23, at the ripe age of 97, was a Los Angeles wrestling and boxing institution. He worked tirelessly for years for Los Angeles promoter Aileen Eaton, the country’s first female boxing promoter at the Olympic Auditorium. He was a key figure in getting support from the Hispanic community.

“The well-dressed dandy was a boxing writer, publicist and adviser in the Los Angeles area who made it a point to greet and guide every boxing writer regardless if they were Mexican or Anglo. All that matters was that the writer was covering his sport: professional boxing,” wrote David A. Avila in a tribute to Magana on TheSweetScience.com.

He came by his boxing credentials legitimately, as Magana had been a boxing writer for various Spanish language newspapers when the Olympic Auditorium first opened in the 1920s. 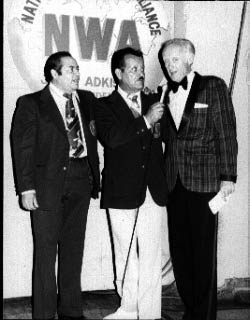 On the wrestling end, Magana also worked very hard for Eaton’s son, Mike Lebell, who handled the very successful grappling side of the dual office.

But Magana is best known publicly as the color commentator for the wrestling show, a run which lasted from 1968 to 1982. Paired with Miguel Alonzo for the weekly Wednesday Lebell/Hollywood Wrestling Office promotion television show, Magana would bop between Spanish and English depending on whether he was interviewing stars from south of the border like Mil Mascaras, Black Gordman and The Great Goliath, Cyclone Negro or English-speaking stars like Fred Blassie, John Tolos, The Destroyer (Dick Beyer), or Ernie Ladd.

“Luis was my favorite announce-partner and I worked with him the longest,” Alonzo recalled from his Mexico City home. “I worked with Pedro Morales and Hugo Savinovich in WWF, and then Pedro and I did WCW’s TV and PPVs afterwards, but Luis and I were always so good together, never stepping on each other’s lines. He did so much besides our announcing — bringing in our Hispanic fans for wrestling and boxing. He helped with Herald-Examiner newspaper coverage and they had hated wrestling. He was a perfectionist and one of my best friends.”

He had a very sharp eye for Hispanic talent, and gave suggestions to the front office as well, both on the wrestling and the boxing sides. Two notables he was responsible for bringing in to Los Angeles were Europe’s Steve Wright (Alex Wright’s father) and David Morgan, both of whom he had seen in Mexico’s EMLL promotion in 1973.

Magana played straight-man perfectly on interviews especially with John Tolos. An example: Tolos had recently turned back to a bad guy, and was cutting another one of his five-star promos on Ruben “Giant Killer” Juarez, who had pinned both Tolos and Ernie Ladd. Magana’s amazing facial expressions while Tolos spit out bites of tacos, tamales and enchiladas were classic. “That’s what I think of Juarez!” yelled Tolos. “That’s good food you’re wasting John,” deadpanned Magana in return.

In 1984, Magana told me, “We were lucky here [in Los Angeles]. Mexico’s wrestling was integrated all those years by Mike (Lebell). For our American wrestlers, this was the first time they worked ‘on the other side’ with Mexican wrestlers which is very difficult. Tolos and Blassie mixed well with boys like Mascaras and Ray Mendoza. Gordman and Goliath worked any style and they also wrestled for Baba in Japan and that style is also different.”

Alonzo and Magana were a hugely-popular announce duo for SIN-syndicated Olympic Auditorium Wednesday TV for the 90-minute Lucha Libre show, which was the companion Hispanic wrestling television to the English version hosted by venerable Dick “Whoa Nellie!” Lane on Saturdays on KCOP/channel 13. A little known fact is that Magana started doing play-by-play with Nono Arsu, who was soon replaced by the likable Miguel Alonso. Alonso later announced for WWF, then WCW.

A positive thinker, Magana recently promising me he’d be back at Cauliflower Alley Club reunion this June in Las Vegas for my Tuesday night tribute to Hispanic wrestling June.

Like many territories, when Vince McMahon bought out the Los Angeles Lebell office, local wrestling was hard hit for many years.

His life was celebrated with a mass at Resurrection Church in East Los Angeles before he was laid down for his final ten count on March 28, 2008.