Pro Wrestling Hall of Fame expanding in more ways than one

The Professional Wrestling Hall of Fame and Museum is growing as both its honouree list and physical space expands this year. 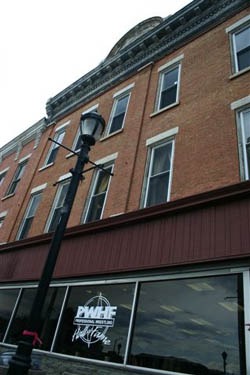 The not-for-profit corporation is holding its seventh annual induction weekend May 23rd and 24th in Amsterdam, New York, and recently made a deal with the city of Amsterdam to expand its current location.

“If you become a member of a hall of fame, then you have achieved the highest honour that can be bestowed upon you. This means that you have worked for a certain goal and achieved it,” said the Hall’s board chairman Tony Vellano.

Bret “The Hitman” Hart and Bob Backlund are this year’s modern era inductees.

The most famous of the Hart wrestling clan, Calgary, Alberta’s Bret Hart achieved his greatest fame as a five-time winner of the WWF World Heavyweight Championship. He is already a member of the George Tragos/Lou Thesz Professional Wrestling and WWE halls of fame, and recently released his autobiography Hitman: My Real Life in the Cartoon World of Wrestling. In June, he will receive the Cauliflower Alley Club’s top award, the Iron Mike Mazurki Award.

Backlund, a native of Princeton, Minnesota, won the Division II NCAA championship at 190-pounds in 1971 before turning pro in 1973. He beat “Superstar” Billy Graham for the World Wide Wrestling Federation (WWWF) World Title in 1978 and held it for six years. This is the first major hall of fame induction for Backlund, who made a brief return to the business in 2007, wrestling and appearing in skits for TNA. Like Hart, he is in the Tragos/Thesz Hall of Fame.

The television era category inductees for 2008 are Gene Kiniski and Bobo Brazil.

Also member of the Tragos/Thesz Hall of Fame, “Big Thunder” spent 40 years in the mat wars before retiring in 1992. Born just outside of Edmonton, Alberta, Kiniski began his career after retiring as a defensive lineman for the Canadian Football League’s Edmonton Eskimos. He won the American Wrestling Association and World Wrestling Association World Heavyweight Championships, but reached the pinnacle of his success by beating Lou Thesz to take the National Wrestling Alliance (NWA) heavyweight belt.

Brazil is considered one of the most successful African-American professional wrestlers in history for his popularity in the 1950s and 60s. Born in Little Rock, Arkansas, Brazil defeated “Nature Boy” Buddy Rogers for the NWA Heavyweight title, but refused it because of an “injury” Rogers suffered during the match. The title change was not recognized by the NWA. A member of the WWE hall, Brazil died in 1998.

Shohei “Giant” Baba is the lone inductee for the 2008 international category. One of Japan’s most famous wrestlers ever, he debuted in 1960 and became the first Japanese wrestler to ever hold the NWA World Heavyweight Championship. He scored the duke over Jack Brisco in a two-out-of-three falls match in December 1974 in Kagoshima, Japan, and would win the title on two more occasions. Baba’s contribution to the business extended beyond the ring when he formed All Japan Pro Wrestling in the 1970s. He died of cancer in 1999.

Former champions Ray Steele and Tom Jenkins, both previously enshrined into the Tragos/Thesz hall, will be honoured in the pioneer era category.

Steele was born in Russia in 1900 and immigrated six years later to Lincoln, Nebraska. In March 1940, he defeated Bronko Nagurski to become the National Wrestling Association’s World Heavyweight Champion. A heart attack felled Steele in 1949.

In spite of having lost an eye at an early age, Jenkins became a dominant wrestler and beat Ontario’s Dan McLeod to become the undisputed wrestling champion of America in November 1901. Born in 1872 in Bedford, Ohio, he popularized the catch-as-catch-can style and also had memorable tilts against Farmer Burns and Frank Gotch. He died in 1959.

Thirteen-year wrestling veteran Betty Niccoli will be the women’s category inductee. The Kansas City, Missouri native launched her career in her home state in 1963, wrestled throughout North America and Japan and won the North American and U.S. Women’s belts. Niccoli might have made her biggest splash by fighting the New York State Athletic Commission, which banned women from competing as wrestlers or boxers. Although she lost her battle, the state did eventually capitulate. The Cauliflower Alley Club (CAC) will also honour Niccoli, presenting her its 2008 Ladies Award.

This year’s non-participant category recipient is Joseph Raymond “Toots” Mondt, a former wrestler whose fame came as a ground-breaking promoter. He forever changed the business by initiating time limits, altering the style of wrestling — especially with the art of “working” — and most revolutionary of all, introducing pre-determined outcomes. Mondt, (who also discovered a young Canadian amateur named Stu Hart) would go on to form Capitol Sports with Vince McMahon Sr. The promotion broke away from the NWA to become the WWWF, and would one day eventually become the world’s most dominant wrestling organization as the WWE. Mondt died in 1976.

The Senator Hugh Farley Award is going to attorney and former wrestler Tom Drake. Presented to a wrestler “who has brought honour and dignity to professional wrestling,” the award winner is chosen by a committee weighing the honouree’s in-ring career and non-wrestling societal contributions. Drake wrestled from 1956 to 1978, and while working as a wrestling coach at the University of Alabama, served nine terms in the Alabama State Legislature. Drake was also Speaker of the House from 1982 to 1987. He previously won the Dan Gable International Wrestling Institute and Museum’s Frank Gotch Award and the CAC’s Iron Mike Award

“All that are enshrined are the same,” said Vellano, comparing previous years’ winners to the 2008 nominees. “They all achieved the highest honour.”

“We have sold out the convention tables last month. We put out 150 meet-and-greet tickets and will be sold out in the very near future. And we have only 100 tickets left for dinner out of the 300 tickets that we offer every year,” said Vellano.

A fundraiser for the Hall will also go down Tuesday, March 18th at Ilio DiPaolo’s Restaurant and Ringside Lounge in Blasdell, NY. Tickets for that event — Night of Tough Guys — have already sold out. Proceeds will also go to the DiPalo Foundation.

With the expanding induction list also comes a growing location for the hall.

Founded in 1999, the Hall rented its first space in April 2002 in Schenectady and moved to Amsterdam in 2005. At that time, the Amsterdam Industrial Development Agency bought the building the Hall is currently housed in, and last fall, agreed to purchase the building next to it to allow the organization to expand.