ALLENTOWN, Pa. — It’s been a quarter-century since the heyday of World Class Championship Wrestling. The young women who shrieked for Kerry Von Erich are moms and even grandmoms. The men who hurled invectives and cups of ice at the Freebirds are grey in the temples.

So, taken with the recent WWE release of a DVD on the wonder years of WCCW, maybe it’s time to set the record straight on a few matters:

Those were some of the topics addressed Saturday by three veterans of the Texas wars, heel manager extraordinaire Skandor Akbar, noted bad guy “Wild” Bill Irwin, and Hart, during a WCCW reunion.

The event, sponsored by K&S Wrestlefest, brought those three together in the ring at Bud Carson’s Pro Wrestling World in Allentown, Penn., to give fans a behind-the-scenes peak at the hottest regional wrestling promotion in the early to mid-1980s. 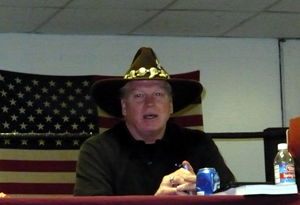 The rocket boosters for World Class undoubtedly were the sons of Fritz Von Erich — Kerry, David, Kevin, Mike, and Chris, who grew up as well-known local athletes and attracted a young demographic when they hit the pro ranks.

“Between 1980 and ’85, it was a tremendous thing,” said Akbar, head of Devastation Inc., who led a stable of the likes of Kamala and The Missing Link against the hometown heroes. “If one of the kids didn’t make it, you went down to Corsicana, Texas, stuck another Von Erich in there [with them] and nobody cared. You see, they were the franchise. They were the dragon-slayers and we were the dragons.”

Added Irwin: “The boys grew up there in north Dallas, they came through football. And as they hit the 21-, 22-, 23-year-old range, that’s when it started popping. Why? Because you had all these young adults who basically knew these guys.”

And while the Von Erichs got the fame and the glory, the WCCW vets said it was important to recognize that the good guys needed foils as a contrast to their clean-cut, all-American image.

For example, Hart said Irwin was “very instrumental” in developing the Von Erich brand. “In all honesty, he was one of the few guys I could put with any Von Erich, and I knew the match would be quality.”

Hayes has taken a fair amount of credit for instigating the Freebirds-Von Erich rivalry, and though everyone on the panel said they hold him in high regard, their recollections were a little different.

Via a phantom “fan’s vote,” Hayes was brought in as special referee for a Kerry Von Erich-Ric Flair world title match on Dec. 25, 1982 so he could doublecross Kerry, cause him to lose the match and set up pure Texas warfare.

“Contrary to what Michael Hayes said, that was all ‘Playboy’ Gary Hart. I brought him in, I manipulated him, I positioned him,” said Hart, who ran the office with referee Bronco Lubich, a 10 percent owner, since Fritz spent most of his time tending to other interests.

“They [The Freebirds] were great at what they did, but that was me. I would have never told you that 10 years ago,” Hart said. “What popped Dallas and Texas itself was Kevin, David, and Kerry. They were the guys that packed arenas.”

On the Sportatorium, Irwin said the Mecca of wrestling in the Southwest disappointed him the first time he set eyes on it. “The Sportatorium, you’re looking for this big fancy building and you come around the corner and you see the words spray-painted, almost, on the side of it — ‘The Sportatorium’ — and it’s a corrugated tin building.”

The ambience inside the structure built during the Great Depression and demolished in 2003, was something special — Akbar called it “synonymous” with wrestling. But he quickly added that the home of World Class was standing only because of a fluke.

“Yes, it was a hard building and it stayed alive … because of a grandfather clause. The plumbing was atrocious and they had all that naked wiring over the concession stand,” said Akbar, who still lives in the Dallas area.

“But over there in Texas, it’s called a grandfather clause. Anything that’s over 50 years old, as long as the license is intact, they can’t do anything on it. So once that phased out, it would have taken a fortune to re-code that building … It’s gone now. It’s like it was never there.”

The demise of World Class started in the mid-1980s with the untimely deaths of several Von Erichs, especially David in 1984, and Gino Hernandez, and culminated with Fritz’ fake heart attack angle on the day after Christmas 1986. The promotion’s wholesome image had faded and repeated desperate attempts to recapture the magic were way off the mark.

“We were presented as a family show,” Hart said, noting that World Class was broadcast on Christian television stations. “People said, ‘They’re not what they say they are; we don’t want our children watching.’ We had played to a family audience.”

But that’s not to say that the Texas promotion should be remembered only for the down times. “Really and truly, when you look back at World Class, you just sit back and enjoy the glory years because it’ll never be duplicated again. It was a great organization and I was happy to be a part of it,” Akbar said.