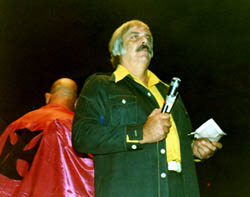 Fans of the old American Wrestling Alliance can still recall some of Rodger Kent’s old reliable lines today: “He’s big enough to go bear hunting with a switch” for Larry “The Axe” Hennig or somebody’s “face looks like a sack full of door knobs.”

Kent was an institution on Verne Gagne’s AWA broadcasts for 25 years, stepping in to work beside Marty O’Neill and eventually hosting the show on his own for years and years. Besides his work with the AWA, he was also a famed broadcaster throughout Minnesota on the radio and on television.

But today, he’s just a regular guy, under his real name of Rodger Vogel, retired with his second wife Andrea in northern Minnesota, just sitting back and counting the dollars. And he made a few in his 83 years.

In fact, he claimed to SLAM! Wrestling that the only reason he got into wrestling was to make a few more dollars, and then, “I made my wad, and got the hell out of there.”

Born in Waukengan, Illinois, north of Chicago, Vogel headed to New York City for six months of broadcast classes in 1946. ABC Radio hired him, but with the caveat that anyone with more seniority returning from the Second World War to their job would be given their position back. “I worked at ABC for three days, simply because somebody had their G.I. card, which qualified them for getting their job back,” Vogel said. Up next was WCYB in Bristol, Tenn., where he got to work with many names from The Grand Ole Opry. 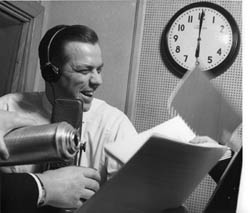 The Twin Cities of Minneapolis-St. Paul were next in 1950, and Vogel landed at WDGY (now KFAN). A five-year stint as the morning show host at KSTP would follow. Then there was three years at WCCO (where he coined the line “Old ‘N’ Bent, Rodger Kent”), as well as KNNO in Anoka, and WAYL, KTWN, and KLBB in the Twin Cities. He was notorious for the sheer loudness of his voice, a deep, booming timbre from deep within.

Vogel still speaks fondly of his DJing, which only ended a half dozen or so years back. “I loved the contact, the phone calls, the people calling me up. Girls were flaunting with me, in front of me, around me, near me, by me, whatever. That’s how I began in the business. I don’t have a voice now — I’m hoarse today. I just had a voice that appealed to a lot of people.”

His career coincided with the ascent of television, so it was only natural for Vogel to end up there as well. At KSTP TV, he hosted a TV DJ show that aired at midnight after The Tonight Show, he participated as a second to T.N. Tatter the clown on a kids’ show, circa 1959, and hosted a weekly outdoors show on WTCN TV called The Minnesota Sportsman that ran from 1964-69.

During its heyday on WTCN TV, the AWA shot out to 17 major markets in the United States from the Twin Cities. Kent was in the middle of it, but not a part of it.

“Rodger never tried to put the spotlight on himself while interviewing the wrestlers. He would ask a question or make a comment, and let the boys run with it,” explained Minneapolis historian George Schire. “Rodger had excellent interviewing skills. He would ask questions that brought out answers from whoever he was interviewing.” 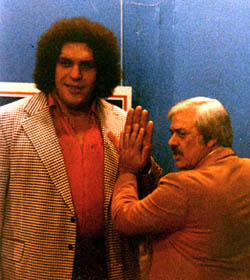 It turns out Kent needed those interviewing skills. When a newcomer arrived in the promotion, Kent had to seek out details to tell the fans from the wrestler himself. Unlike today’s announcers, who sit in on booking meetings and have earpieces wired into the production trucks, Kent was never filled in on what would happen in the ring either. “That’s why when I showed some surprise in front of the microphone, it was for real because they always kept it to themselves,” he said.

For Donn Wingate, host of The Prima-Donns cable access show, that’s actually what he remembers about Kent. “Rodger was really good about getting the action over in the ring when it was killer heel Verne wanted to get over or the fiery babyface comebacks and especially those rare big TV angles. His voice would get louder and convey excitement so that you knew this was something big and out of the ordinary going on here. He did his job really well.”

Mick Karch, who would go on to host various Minnesota wrestling shows in the 1980s onward, admired Kent’s staying power. “I believe Rodger’s strong suit was really his longevity. He wasn’t the greatest announcer in the world in terms of delivery or enthusiasm. He was more of your ‘everyman,’ just a constant in our homes every week for so many years. When it came time to really sell an angle, however, Rodger’s consternation and disgust at the heels was very believable.” 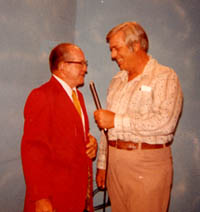 Also believable were some of Kent’s medical phraseology; after all, he was a licensed chiropractor. “It helped me in my microphone work, because I was able to use doctor’s terms,” he explained. “If I guy got his head slapped in the back, ‘He just got his occipital protuberance smashed into the mat.'”

Vogel got interested in chiropractic medicine when his first wife’s uncle, who was a chiropractor, helped make it possible for the couple to have another baby. “It just impressed me so much, I became a chiropractor,” he said. Vogel’s practice closed more than a decade ago.

Kent never palled around with the wrestlers, or got to know many of them personally — “They did their bit, and I did mine” — but he did learn to respect what they did in the ring, the trials and tribulations of the road, and he would defend the sport outside of the studio.

In the studio, Kent had an important role to play as well away from the camera, said Karch, who was a regular in attendance in the small studio. “I remember going to the WTCN Studios in Minneapolis almost every Saturday for the TV tapings. Rodger was the play-by-play guy for so many years. One of the great memories was Rodger’s ‘pep talk’ to the fans who attended the matches. He would tell the fans to make a lot of noise, to cheer and boo, but ‘don’t wave at the camera,’ because then ‘you would have your hand in front of their face, and they would have their hand in front of your face, and nobody would be able to see anybody on TV.’ And of course, he would remind people not to ‘throw anything into the ring, because a wrestler was blinded by a tossed paperclip in Omaha, Nebraska.'” 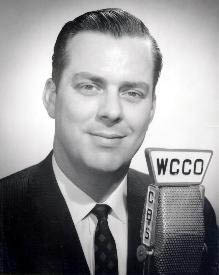 Rodger Kent, many moons ago. Courtesy Minnesota Museum of Broadcasting

Kent admits to still being in awe of some of the wrestling fans he met through the years, their passion and dedication still alive with him. “There’s one thing that sticks in my mind after all these years — there was one guy who used to come to the wrestling matches every week, and he would stand up — and there were women there also, but he would stand up, extend his middle finger high in the air, hold it in his right hand, with his left hand around the wrist. He’d raise it above in the air, and give it to the rest of us, wave it at the wrestlers in the ring that were working each other. If they were winning the match, and he didn’t like them, he’d give them the big finger.” 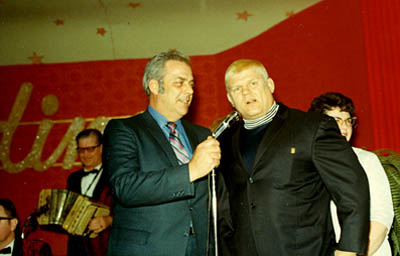 Just recently, Vogel got a letter from an old lady from Wisconsin, who wants him to bring the old wrestling back to her town. It brings a chuckle.

What doesn’t bring any laughs is the name Verne Gagne. “He was a cheap S.O.B.,” Vogel said. In fact, Vogel once sued Gagne for wages, claimed that he was not fairly compensated for his work. According to Vogel, he lost the suit — for $1 million and 63 cents — because the woman judge was a fan of the perennial AWA World champion Gagne. But he can admit that Gagne was loved by the fans. “I don’t think they got enough of him. Let’s face it, he made a lot of money off wrestling.”

Vogel’s feelings for Gagne are nothing new, said Karch. “When I was hosting Saturday Night at Ringside in Minneapolis, Rodger was a guest on the show. Much of his interview was spent discussing his resentment towards Verne Gagne!” 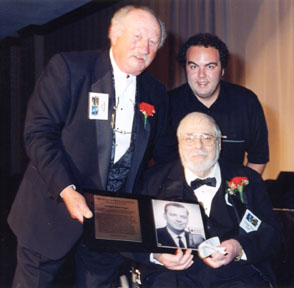 The love for the work of Rodger Kent continues in retirement. He was inducted into the Broadcasters Hall of Fame in Minneapolis (which also includes Gagne) in 2003, with the accompanying banquet sponsored by the Minnesota Museum of Broadcasting. It was the Minnesota (Pavek) Museum that pieced together the YouTube clip of Kent’s work that is easy to find (and is embedded below).

But though Rodger Kent may be a celebrity, Rodger Vogel isn’t forgotten either. From his first family, he has four children and numerous grandchildren. His second marriage, well, he can describe: “My wife and I are very happily married, and go about our business, and go on with it.”

Andrea Kent laughs. Both Kent and Vogel still mean something in the state. “He gets recognized,” she said. “We’re in a small town up here, but people still remember him even though they haven’t seen or heard of him for a long time. They remember the name or they remember the voice.”