NEWARK, Calif. – Back in October 2007, San Francisco suffered through a dishonest reunion/convention called “Wrestle FanFest” at the famed Cow Palace. But this past weekend, across the San Francisco Bay, a smaller-scale event, similarly dubbed “Wrestlefest,” proved to be an honest, enjoyable event.

The man behind Saturday’s “Wrestlefest”, Kirk White, has promoted his Big Time Wrestling (named after the promotional vehicle name Roy Shire called his 1961-1982 territory) bimonthly shows for nearly 14 years. This was his fifth, every-other-year, fan convention that was paired with an evening wrestling show.

This isn’t to say there weren’t a few problems.

Jimmy Hart was billed, but didn’t show — rumours are that he has some kind of heat with Jim Neidhart and a Hart Foundation reunion was planned. And then there was poor Traci Brooks, who was stuck in Canada after her passport and all her ID was stolen from Christy Hemme’s rental car during a recent trip home for some shows.

But other than that, everyone advertised showed to sign autographs, take pictures and most even participated on some level in the evening show. For example, there was Harley Race sitting at ringside, and Bret Hart came out and talked to the crowd.

As for Gail Kim, it is my belief that she set a record for intermission Polaroids in the ring. In fact, Gail struck me as one of the most professional people that I’ve ever met, male or female, and I’ve been covering the wrestling business since 1966. Whether she was putting up with demanding fans asking her to sign more than they paid for, or my own requests to pose with Bret Hart, Harley Race or Steve Williams, Kim always did so with a smile. At the show, she had one of the best matches on the show (against Candice LaRae), even though her familiar opponent, Traci Brooks, didn’t make it to the Newark Pavilion. 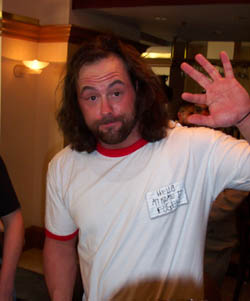 In many ways, the Newark Pavilion helped make the event the success that it was. It reminds me in many ways of a smaller version of the famed Tokyo Korakuen Hall in terms of perfect atmosphere for wrestling; there’s a reason that White still runs his BTW shows every other month from here.

Like Gail Kim, Nick “U-Gene” Dinsmore impressed me. He is a real student of the business, an avid viewer of Japanese and territorial tapes. His knowlege of the business impressed the big names in the dressing room — apparently all the time working with Jim Cornette in Ohio Valley Wrestling helped!

In fact, for those who don’t know anything other than the Eugene character from WWE, Dinsmore was a talented mat-and-chain grappler in OVW. But the Eugene was partly his idea, and now he is free to more fully explore the character on the indie and Japan scene. In action Saturday night, Dinsmore did all sorts of brilliant nuanced things, lifting from the repertoire of Baron von Raschke, the Blackjacks, Gene Kiniski and of course The Rock, Triple H, Steve Austin and Hulk Hogan. It was amazing to watch.

In conversation, he is matter-of-fact about his WWE stint, and truly wishes that he had had the chance to complete the story arc he envisioned for Eugene — having him cut a promo claiming he was “faking it” the entire time. “It would’ve been big but only at the height of my push there,” he said. The heel turn that did happen, near the end of his run when he was paired with Hacksaw Jim Duggan, didn’t matter since the character had died off and fans didn’t care.

The other throwback that got me into my own time machine mind — just as I remember The Mighty Igor and, later, Ivan Putski in The Mighty Igor copying-mode doing, Dinsmore made me wait for a photo; he first had to mess up his hair and go into his U-Gene trance. The glasses and combed hair just didn’t cut it!

Not all the legends were necessarily billed. I called up the original/first Paul Diamond from Toronto, who lives nearby but came despite feeling under the weather. Diamond, being a veteran of the old Roy Shire promotion, told old Pat Patterson stories to anyone who asked, and shared other tales — getting into it with husbands of wives he’d toss red roses to and flirt with back in the AWA, Calgary and Bruiser’s old WWA territories. He later talked with Bret Hart about working for his father Stu in Stampede Wrestling. (Incidentally, Diamond does the best Stu impression this side of Dickie Steinborn, who wanted to come out but is recovering from surgery at nearly 80 years of age.)

The show itself was good, highlighted by Kaz (Frankie Kazarian) getting a surprise win over his former UPW training stablemate Chris Masters in the main event. They hugged post-match and Kaz asked that Masters return back for a rematch. Fans chanted “this is awesome” throughout the match, which hit Masters with a lot of emotion backstage. He said he doesn’t typically get that appreciative reaction other than the usual fan response to top heels, and really enjoyed his weekend at BTW. 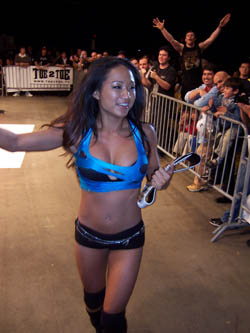 Gail Kim on her way to the ring.

Other matches and notable events: