Three discs too little for 15 years of Raw

When Raw turned 15 years old in late 2007, WWE Home Video announced that it would be releasing a best of compilation set that would feature matches and highlight interview segments from the Monday night staple’s history.

What we got in this three-disc set, simply titled The Best of Raw: 15th Anniversary, does pretty well on most of the moments, but there are some glaring omissions.

Before I get into the misses, let’s look at what they did hit on. 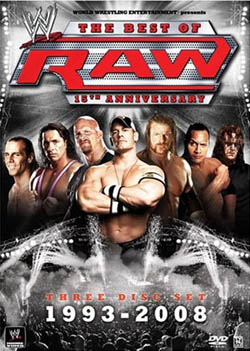 Disc One
Covering the early years, the Fed includes some spectacular matches (namely the Owen Hart vs. British Bulldog European Title match) and some strong interview segments, including Steve Austin’s first Stunner on Vince McMahon. There are some suspect moments here (did anyone really want to have Will Shatner’s appearance on DVD?), much of the recording is pretty thorough.

The biggest beef, however, is that the Mr. Perfect vs. Ric Flair match is horribly clipped, and the ECW Invasion section is just a retread from the Rise and Fall of ECW DVD. Given that the Jerry Lawler/Paul Heyman debate has never been put, in full, on a recording, it could have easily taken the place of the montage we get.

Disc Two
Most of the Attitude Era is included on this disc, with the vast majority of the selections being segments that don’t involve ring action. Well, we all know which VeterRan writer to blame for that, now don’t we? I can admit to being sucked in at the time, but looking back now, the latter part of the ’90s was horrible for in-ring action (thankfully WCW was still doing solid matches at this point to keep me interested in pro wrestling).

The moments included here, again, are pretty damn solid. The Chris Jericho victory is part of the action, while we get all the classic Steve Austin moments. There are a couple stinkers (Mean Street Posse vs. the Stooges is a sore thumb).

Here, we get a couple more matches, namely very lengthy ones from Shawn Michaels (versus Edge, Kurt Angle and Shelton Benjamin). We also get some great moments from Evolution and The Rock, but the stink seems to be pretty evident in the air, including Eric Bischoff’s trial and the live sex celebration with Edge and Lita.

So far this compilation is looking pretty good, right? Well, let’s take a look at what was missed (in as close to chronological order as I can remember).

So yeah, there’s plenty of items that have been missed. Can I blame WWE for this? Many yes, but some circumstances don’t lend themselves to inclusion, be it because of controversy (Benoit), battles with former stars (Hogan) or inclusion on other recordings (Edge/Hardy on the Ladder Match). Others…well, I still think the AAA matches were a fun addition to the program in the mid-’90s.

In terms of recommendations, I can’t not suggest picking up this set because there are some key moments you will want to relive and more than likely already have on tape somewhere that are better preserved in DVD format; however, you should go in knowing that you won’t get all that you want. Thus, I recommend waiting for the inevitable Blockbuster or FYE blow-out before laying down full-price for this set.